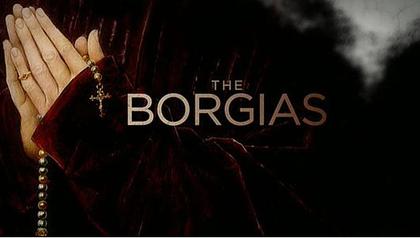 I finished the first season of The Borgias today, and wow - it is such an entertaining show.  I have to admit, when I saw the first episode I kept thinking, "Scar?" every time Jeremy Irons spoke, but over time I got into the story and forgot his voice.  And what a story!  You'd think that the story of a Pope arguing with his cardinals would be a bit on the dull side, but thanks to Pope Alexander VI's completely corruptible nature, there are bastard children running around getting into twenty kinds of trouble.

Holliday Grainger is so pale and beautiful.  She looks perfect in the role of Lucretia Borgia.  Whatever actor they got to play her servant Paolo is smokin' hot, too.  But I'm a little disappointed in the casting of Cesare Borgia.  I don't know why Francois Arnaud doesn't seem quite right to me, because he's certainly a capable actor.  Something about his face just doesn't match my mental image of Cesare, I suppose.

I can't wait for season 2 to hit Netflix, but since it just started in April the episodes probably won't be available for a long time yet.
Collapse