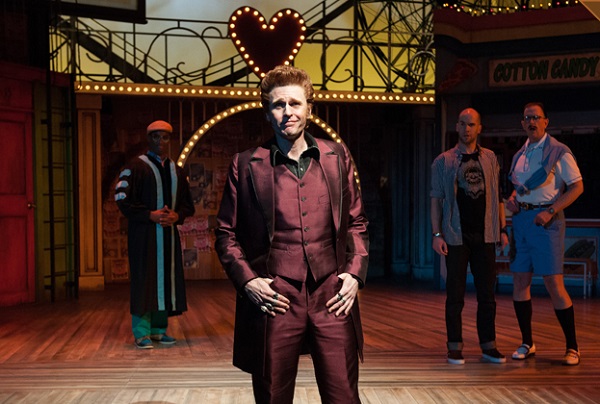 THE TAMING OF THE SHREW

A tale of two sisters
Sweet-tempered daddy’s girl Bianca can have her pick of suitors—but not until her sister, the acid-tongued Kate, can be married off. Rising to the challenge is rockabilly musician Petruchio, but can he match Kate jab for jab? A hilarious, delirious tangle of masquerades and misdirection plays out against a backdrop of beach boardwalks and rock ’n’ roll. And in the end, the surprising love story dares to ask what roles we play . . . and, underneath, who we really are.

The fact that The Taming of the Shrew is one of Shakespeare’s more popular plays always surprises me, because you’d think that the story of a man forcing a woman to marry him and submit to his will wouldn’t sit well with a twenty-first century audience. Yet it does, and never have I seen the story told better than in Oregon Shakespeare Festival’s rockabilly spectacle. 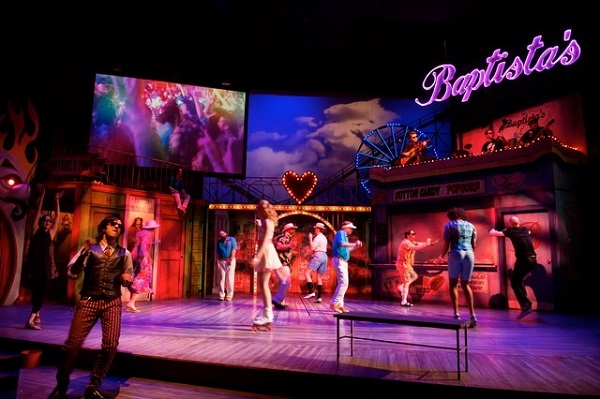 Set on a boardwalk that has clearly seen better days, the characters are transformed into tourists, food vendors, and ride operators. The set looks fantastic, and once the Boardwalk is peopled with extras it’s hard to believe that it isn’t real. The time period is a bit hazy – at first, you think it’s set in the 1950s as girls whiz by on roller skates, but once characters start cracking jokes it becomes obvious that it’s set in the here and now. (Tranio even makes a Jay-Z joke at one point.) I love the retro costumes, though. The women all look like they were dressed by Modcloth stylists and the men all wear collared shirts and light-colored pants. (I assume this is a reflection of East Coast beach fashion – men here in Northern California wear dirty t-shirts with the board shorts, if they can be bothered to cover up their upper halves.) It all looks great!

Of course, the play is really about the characters, and OSF’s casting director really hit the ball out of the park with these guys. Ted Deasy is the slickest, hippest Petruchio I’ve ever seen, and I loved it. From the moment he swaggers out with his hair greased up like Elvis and announces his intention to marry a wealthy woman, he owned that stage. He threw himself into the physical comedy, and oozed confidence whenever dealing with Kate or the other men. But during one his soliloquies –the one that begins “Thus have I politicly begun my reign” – there’s a moment at the end where he asks the audience if anyone knows a better way to tame a willful woman. And as he looks out at the audience, that question hanging in total silence, Petruchio shows uncertainty and regret…and hope that someone can tell him another way to do this because he doesn’t want to be a monster if there is any alternative. But of course, no one answers, so he sighs and puts his game face back on. But that vulnerability is remembered throughout the rest of the play, and it makes him so much more sympathetic.

His Kate, played by Nell Geisslinger, eventually catches on to this aspect of his personality, albeit after several rounds of suffering at his hands. It’s a great moment. Petruchio says something ridiculous, but so tired is Katharina from hunger and lack of sleep that she gives up and agrees. They banter back and forth, and suddenly she gets this glint in her eye, and her responses become increasingly saucier as she finally understands what Petruchio wants. It’s not a war that Petruchio is waging, but a game that he’s offering, and they are so well matched in temperament and wit that should she choose to play it will be great fun for both husband and wife. This plays right through to her famous final speech, where the words are outwardly submissive but the way Petruchio and Kathrina look at each other it’s clear they’re equal partners.

Or, to put it shortly: Geisslinger and Deasy have fantastic chemistry, and it dazzles – especially when the two of them bust out guitars and start making music together. (Euphemism!)

Bianca is delightful. She has a childishness that contrasts sharply with Kate’s world-weariness, but under all that sweet innocence she’s a girl who knows how to manipulate men. In an early scene, she’s shown reading 50 Shades of Grey, hinting at her dual nature. It’s so much fun to watch her suitors vie for her attention, since each actor brings his own spin to the characters. The dialogue has been updated in some places, and I don’t know whether the actors adlib the jokes off-the-cuff or if it was written into the show, but the humor works so well.

This was definitely one of the best Shrews I’ve ever seen! 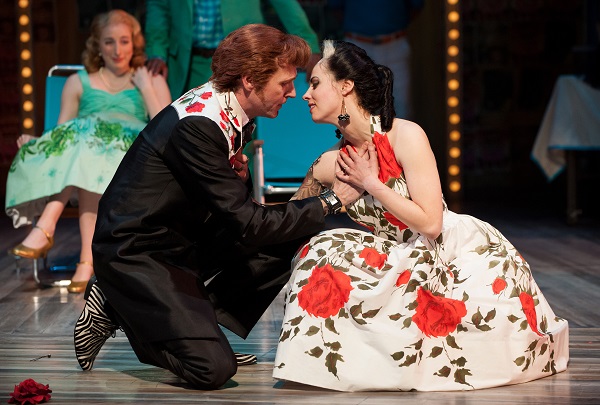