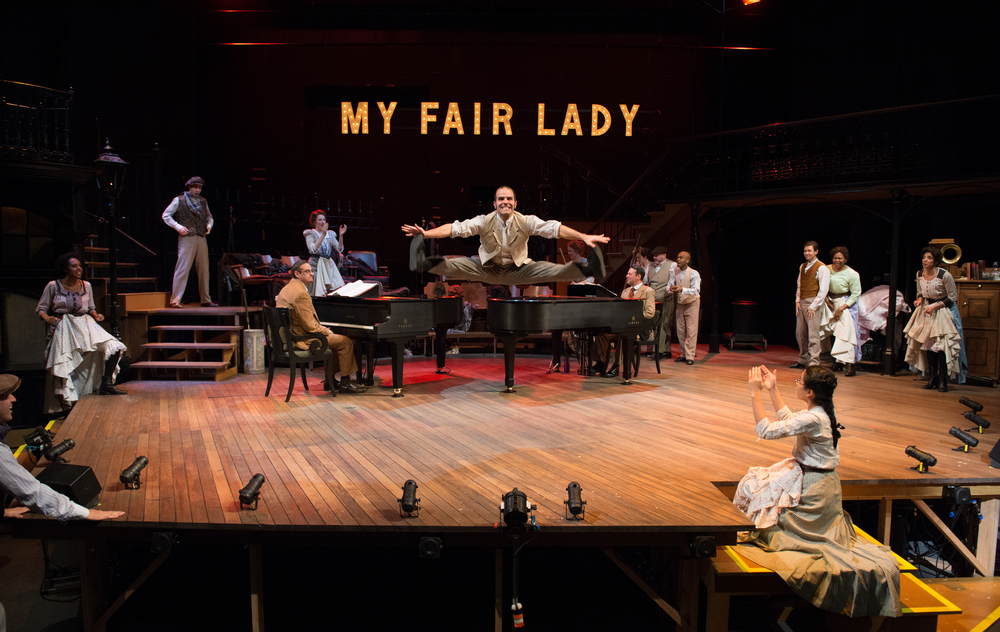 The perfect musical
Professor Henry Higgins loves language. Cockney flower girl Eliza Doolittle yearns to speak like a lady. Sparks fly when his curiosity and her passionate determination launch a daring social experiment designed to turn a lower-class ugly duckling into a high-society swan—with unexpected results for both of them. Lerner and Loewe’s effervescent adaptation of George Bernard Shaw’s Pygmalion is one of the most exquisite musicals ever written. This intimate, two-piano version, approved by composer Frederick Loewe, promises to illuminate the story in ways you haven’t heard before.

Oregon Shakespeare Festival calls My Fair Lady “the perfect musical”, and I tend to agree with them. It’s a delightful and fun show with engaging characters, charming story and wonderful songs. But the 1964 movie has become so incredibly iconic that it’s hard to imagine the characters any other way, and any company that proposes to stage the show must do so in the film’s shadow.

The set design is either clever or strange – perhaps it’s a mixture of both. Square in the center of the stage are two grand pianos. Behind them rise a set of bleachers. There are a few set pieces – a wardrobe, a street lamp, two wrought iron staircases – but the stage is largely bare. The actors sit in the bleachers, drinking from purple plastic water bottles and watching the play unfold as if they are just another part of the audience.

It’s very odd to see the front stage so empty and exposed. This layout has some very cool advantages – the two pianists are incredibly talented and it’s great to see them raised to the same stature as the actors before them – but it’s also a bit awkward. Choreographing big, musical-style dance numbers is certainly more challenging when the actors must perform around two massive, immobile instruments. It was even stranger to have the actors not “on stage” sitting in front of you, staring out at the audience or even whispering and nudging each other. It could have been so very distracting.

However, the two lead singers/actors were so darn perfect in their roles that it was easy to ignore all the people behind them. Both Jonathan Haugen as Higgins and Rachael Warren as Eliza Doolittle brought something a special to their roles, managing to make the characters their own while staying true to the story. When a prop’s technical malfunction temporarily derailed them, the two actors improvised brilliantly, covering up the failure and making the audience laugh. As Eliza’s father, Anthony Heald had me in stitches every time he was on stage. Oddly, the character who stood out the most was Freddy Eynsford-Hill, a milksop of a boy that I normally forget about the moment he steps off the stage. Ken Robinson owned that role, and threw himself into it in such an over-the-top way that he succeeded in making Freddy interesting, and I wanted to see more of him. Major kudos to Robinson for the success! Heck, kudos to all – OSF hasn’t been doing musicals for very long, but this one was absolutely superb and made me wish they did more shows with singing and dancing because they’ve obviously got the talent.
Collapse