Graze Box #2 arrived just before I left town on a trip, and as a result it took much longer than usual to eat all the snacks.  There were no repeats - not that I was expecting any, since this is only the second box - but when I looked over the contents of the box I was a bit disappointed, because the selection wasn't nearly as interesting as the first box. 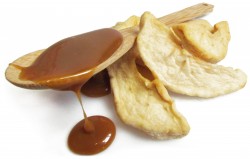 Toffee Apple
Dried apple pieces and a toffee-caramel dipping sauce.  Hmm.  Interesting concept, weak execution.  The dried apple pieces tended to be rather small and a bit floppy, making dipping them a challenge.  The sauce itself was sweet, with a rich toffee flavor - but I like my snacks on the go, and this is just too high maintenance to bother with.  I trashed it.

Cheddar Gorge
Generally, I love cheese-flavored things, but this particular snack was difficult to finish.  The cheese cashews were probably the best element; the nut has a certain creaminess to its texture that matched the cheesy flavor well.  The herb bites had too much herb and not enough cheese for my tastes, and the salsa corn sticks tasted stale and greasy, like old tortilla chips that sat in the fryer a bit too long.  Another snack trashed.

Tutti Frutti
Dried fruit mixes can be really hit or miss for me.  This particular blend of "blueberry infused cranberries, pineapple, cherry infused raisins and green raisins" was way too sweet.  I don't know if I tasted cherry or blueberry infusions, but I am curious how one goes about transforming a mere raisin into one infused with cherry flavor.  But this snack, too, was trashed.

Pear Tatin
This fruit and nut trail mix was the only winner in box #2.  The combination of pears, raspberry infused cranberries, yogurt coated sunflower seeds and almonds had perfect ratios of crunchiness, sweetness, and chewiness.  This is the only one I marked as 'like' - and if I wasn't so interested in variety it probably would have rated 'love'.  The combination of tart cranberries, sweet pears, slightly bitter almonds and slightly sour yogurt works so well - and it's a mix I would never have come up with on my own.

My next box should be coming at the end of this week.  Hopefully the third time will be the charm!
Collapse