Autumn 2013 Yuzen Box
The lack of shopping in Boulder has been getting to me of late, so in order to appease the consumer urges within me I subscribed to a new subscription box. It's called Yuzen, and each box is supposed to “send a little zen” in the mail. The items are mostly skincare products, but occasionally snacks or relaxation items (candles and suchlike) make their way into the boxes. At $33.00 per box, Yuzen is the priciest subscription box I've signed up for thus far. I chose it not only for its zen theme, but also because it is delivered quarterly. I feel less guilty about a more expensive box if it only arrives once every three months.

It looks like each box has a haiku in the introductory letter; autumn's poem comes from the poet Issa:

”The cool breeze
Finds a home on even
A single blade of grass.”

The letter reminds subscribers to “rebalance” and revitalize as they transition from winter into autumn. Sounds nice to me – I feel like I'm reinventing myself already just by living in Utah, but a new face mask or body treatment wouldn't be amiss.

Everything is packaged in a lovely blue box, and then wrapped in pink tissue paper. It's all quite adorable. 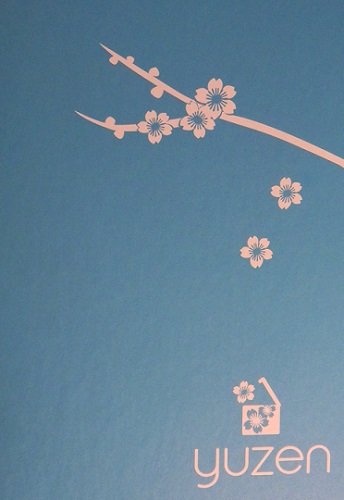 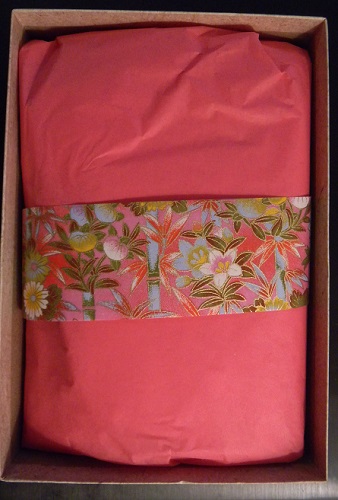 The decorative strip of patterned paper makes me think of an obi worn at the waist of a kimono.  How very fitting.  I must give credit where it is due - this is certainly the prettiest subscription box I've ever received.  After unwrapping the tissue paper, I found all the products tied up in a white cloth bag.  Goodness, between this box and Ipsy I really am going to have more make-up bags than I can ever use. 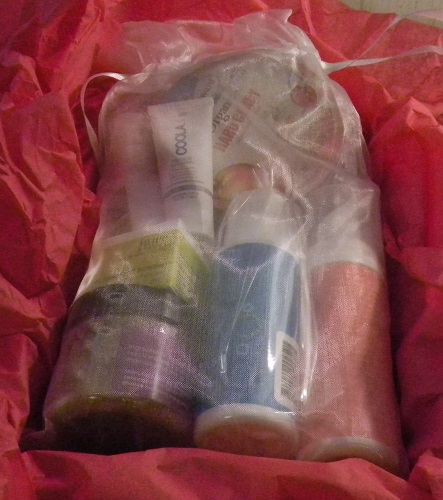 ACURE Argan Cell Stimulating Body Wash - Argan oil continues to be one of the trendiest ingredients in high-end skincare, but I think this is the first time I've seen it in a body wash.  There's lots of other additives here, too, including sea buckthorn oil, pumpkin seed oil, and CoQ10 - whatever that is.  (I think it has anti-aging properties.)  It's been a long time since I've used a liquid body wash, but I have to admit that this intrigues me.  This has a nice, clean smell that teases at my memory; I know I've come across this scent before yet I can't identify it.  It reminds me a bit of seaweed, I think.  An 8 oz bottle costs $9.99; this trial size bottle would probably run between $2 and $3.

Ajara Ayurvedic Beauty Tea Bath Sachet - This is similar in concept to a bath bomb, but instead of fizzing or dissolving the herbs and fragrance oils are contained inside a sachet.  Well, it certainly makes cleaning up afterwards easier!  This is definitely intended to aid in relaxation; I can smell lots of chamomile and lavender in the cheesecloth bag.  Each one of these sells for $4 on Ajara's website.

COOLA Mineral Facial Sunscreen - This SPF 20 sunscreen is actually tinted, which makes it slightly different than the sample I received in an Ipsy bag not too long ago.  As I mentioned before, at $36 for a full-sized bottle of this sunscreen, I'm highly unlikely to buy it, but I'll definitely use the sample, which contains about $5 of product.

Juice Beauty Green Apple Peel Sensitive - Ooooh, a chemical peel!  This is supposed to brighten skin tone and minimize fine lines, which sounds good to me!  Usually I pay someone else to apply a chemical peel treatment at the day spa, but I've liked the Juice Beauty products that I've tried in the past so I'll give this a go.  It's for sensitive skin, so I hope it won't be too strong for me.  A full-sized, 2 oz pot of this stuff costs $39, which means that the 7 ml trial size, again, is about $5.

SANITAS Vita-Rich Serum - I was starting to wonder where the money was being spent on this box, but this $27 serum answers that question nicely!  Serums are always pretty pricey, though, and this particular one claims to contain vitamins A, C, D, E, and K as well as other moisturizing elements.  I'll definitely use this; serums are an indispensable part of my daily skincare regime - and I'm glad this sample was included, because the price tag of the full-sized bottle would definitely scare me off of trying it.

SPHATIKA Rose Cleansing Foam - I love products with rose; it smells great and it does great things for my skin like reducing redness and healing psoriasis patches. This is another expensive (out of my price range!) item; the full-sized bottle is $55 and the sample is half that size.  I'm eager to try it, but I hope that I don't love it, because this is not a cleanser that I think I can afford to buy regularly.

TORIE & HOWARD Blood Orange and Honey Hard Candy - Hard candy generally doesn't thrill me, but I do make an exception for honey-flavored candies, so this was a delightful find.  Each candy is individually wrapped, which I didn't expect because they were already in a tin, and it's a nice, light flavor.  The orange is definitely the stronger of the two, but it isn't a nasty fake creamsicle or a synthetic citrus.  It's quite tasty.  I'm not the sort to carry around a $5 tin of hard candy in my purse, but I have to admit that after browsing the Torie & Howard website I am intrigued by their pear and cinnamon flavor...

VERVE ORGANICS Soul Sister Lavender Nut Sugar Scrub - That's two lavender products in one box.  Normally, I protest repetition in subscription boxes, but I do think it's hard to separate lavender from a "spa" experience, so I'll not complain too much here.  This looks like a pretty standard sugar scrub, although it's a little dryer than the ones I used to sell at Bath & Body Works - I don't see an oil slick floating across the top of the sugar.  The 'nut' in the name refers to the coconut and macadamia nut oil in the scrub.  These little 2oz tubs sell for $4.

The total estimated value for this box is $80, and every single item is one I'll end up using.  They aren't all things that I can afford to buy, but that's the fun of these subscription boxes anyway - you can try a little bit of things you'd never discover or purchase on your own. 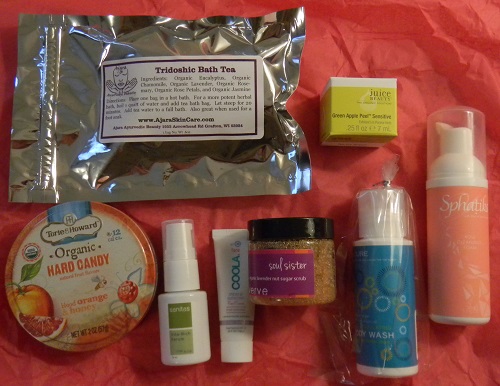