It's hard to believe that just one week ago, I was soaking up the sun in 80+ degree weather in Southern California.
I feel an epic sulk coming on. 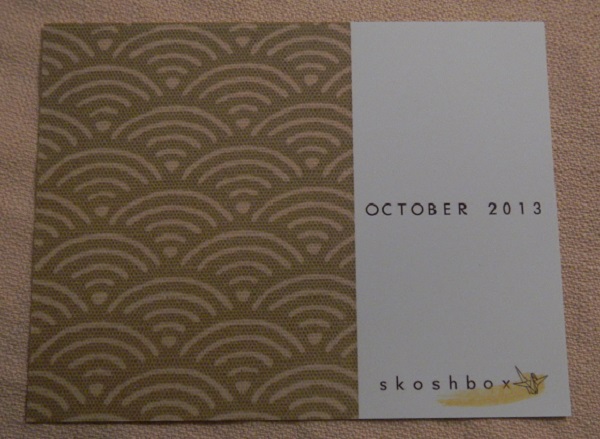 SKOSHBOX: OCTOBER 2013
This, I promise, is the last new subscription box for a while. I subscribed to Skoshbox because I have a constant craving for Asian sweets, and there isn't a grocery store that carries them for hundreds of miles. Of course, next month I'll be back in California, where Chinese and Japanese supermarkets abound, so this box really needed to impress me if I was going to continue the subscription.

Skoshbox promises “Japanese snacks, candy and accessories” in each of its $12 boxes. When the box arrived, I was a little disappointed by how small it was, but I reminded myself that Graze boxes are even thinner and they manage to provide great snacks. 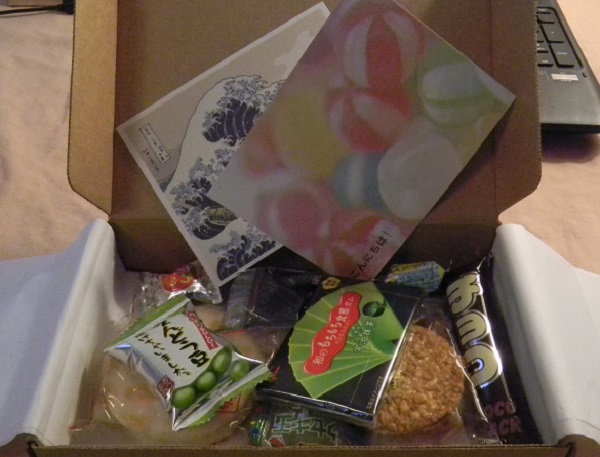 The “accessories” in this box were two postcards, one with a blurry close-up shot of Japanese hard candies and the other a print of Hokusai's Great Wave. Talk about uninspired – if I want postcards like this I can easily print them myself. Surely Skoshbox could have found some cute erasers or pencils or something like that?

But I really subscribed to this box for the edibles – so how did they measure up?

BLACK SESAME MOCHI - Yum. I love sesame flavor, and I love the chewiness of mochi – this little snack was perfect.

FIZZY SODA CANDY IN PINEAPPLE AND APPLE - These small hard candies, a skosh smaller than a marble, were great. There's a pleasant fizziness that pervades the entire candy, and the flavors were sweet and true to nature.

ENDO GREEN PEA - I know that the Japanese often mix fried green peas in with their crackers, but I've never understood why. This was like crunching on little rocks – the peas had very little flavor and they were too hard to really enjoy.

SPARKLING BALL HARD CANDY IN APPLE - Compared to the fizzy soda candy, this apple tasted more like a chemical simulation of an apple than a fresh apple from a tree. It was jawbreaker-sized, and a little too big to fit in the mouth comfortably. The outside was pebbly with sugar granules. I'm pretty unimpressed.

SOFT SALAD SENBEI CRACKERS - not sure why it's a 'salad' cracker. It had a nice crunch and a somewhat astringent flavor, rather like vinegar.

UME CRACKER - This cracker has a pickled plum glaze on it. If you like ume, you'll like this cracker. I found it a trifle too tart, myself.

NIIGATA RICE CRACKER - Another crunchy cracker that I didn't find too exciting. It's like generic corn chips – if you have a bag in front of you, you'll eat them, but you don't intentionally seek them out.

NORI WRAPPED SENBEI - I've always had a soft spot for seaweed-wrapped crackers, so this was my favorite of the crunchy snacks. 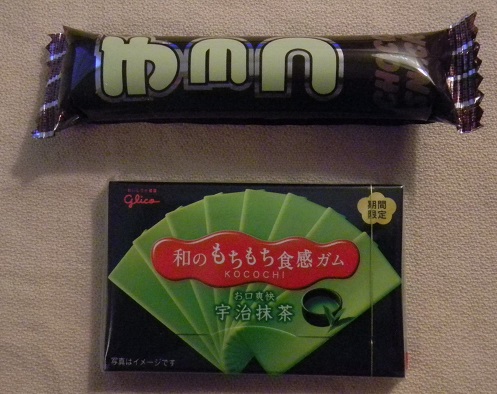 CHOCOLATE PUFF - I was hoping this was a mini chocolate bar “puffed” in the style of Aero bars, but alas, this was not to be. The “puff” is a cracker that reminds me of a breakfast cereal that has been coated in chocolate. It really wasn't that good.

MATCHA GUM - This was the only “full size” item in the box, containing eight pieces of green tea gum. Each strip of gum has stripes of green tea across the surface, but the gum itself has a menthol-like flavor that I didn't especially care for. Luckily, it wears off quickly, and the green tea becomes the dominant flavor. This was OK.

As you can see, most of the items in the box were just a single piece of candy or cracker, which means I went through the snacks fast. Usually, subscription boxes seem like a great deal, but in this case I felt as though I didn't get my money's worth. I couldn't really price these items, since I often didn't know the brand name. But I've seen bags containing 10-12 cracker packets selling for around $4, so only one packet isn't costly at all.

I don't think I would recommend Skoshbox, especially if you live in an urban area where you can go directly to the store and get candies yourself! But since I'm a little desperate out here in the middle of nowhere, I'll give them one more chance to win me over with the November box.
Collapse