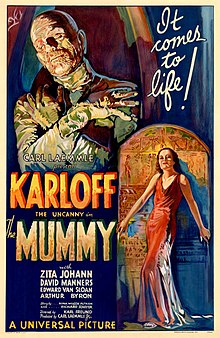 Starring Boris Karloff , fresh from his role as the title character in Frankenstein, The Mummy is one of the classic Universal horror films. I feel like I ought to have seen it years and years ago, since I love Egyptian archaeology. When I saw the film streaming on Netflix, I knew that I had to watch it.

During the 1927 British expedition in Egypt, a mummy is uncovered, and an unwitting photographer recites a spell that brings it back to life. The mummy, named Imhotep, steals the scroll containing the spell and escapes. The following year, a new excavation team is working for the British Museum. Frank Whemple, son of the archaeologist who discovered Imhotep, is led by a strange Egyptian man named Ardath Bey to the tomb of a princess Ankh-es-en-amon. Her treasures are soon on display at the Cairo Museum. But Ardath Bey isn't finished; when he sees a young woman named Helen, he becomes convinced that she is the reincarnation of Ankh-es-en-amon, the long lost love of Imhotep – Bey himself. So that they can be reunited for eternity, he must recall her past life to her, kill her and then resurrect her with the spell that brought him back to life. Young Frank Whemple, also in love with Helen, must stop the mummy before he carries out his gristly plan.

My initial reaction was Wow, that movie was actually a lot better than I expected. It's an old film, and I often don't have patience for the slower pace of storytelling and overly expressive acting. But while The Mummy definitely has some marginal acting (I'll talk more about it in a bit) the story moves along quite quickly and the plot is clear and focused. A run time of only 74 minutes means that the film has to move quickly – not like today's bloated two hour plus butt-numbing epics. The special effects make-up on the mummy is excellent – Karloff definitely looks dead! - and the sets look close enough to Egyptian to pass in a Hollywood world.

I'm never sure whether I should say, “Man, these actors are bad!” because they weren't trying to be realistic and believable. The ridiculous expressions and over-the-top gestures are holdovers from the age of silent film, when the lack of dialogue meant that everything had to be shown on the face. But the actors still look quite silly at times. Boris Karloff as Ardath Bey is very stiff and wooden, but then again he's a reanimated corpse, so it's appropriate to the role. The love interest Helen (Zita Johann) is beautiful in a 1930s manner, and speaks in that breathy, seductive way that actresses of the era favored. Her performance is superior to most “scream queens”, but she and Karloff are surrounded by a cast of mostly forgettable, dull men. Frank Whemple has no personality at all, which makes the “romance” between him and Helen especially weak.

Some of the issues stem from script problems, too. At one point, Frank basically tells Helen that he instantly fell in love with her because she looks like the mummy of the princess he excavated – what girl wants to be told she's desired because she resembles a desiccated corpse? By contrast, Ardath Bey may want to kill her, but there's at least a history between him and Ankh-es-en-amon to justify his obsession.

But it's a fun movie. I was surprised how much I liked it. Sure, it doesn't have action like the Brendan Fraser Mummy series, but The Mummy is a solid story that provides plenty of mystery and creepiness.
Collapse