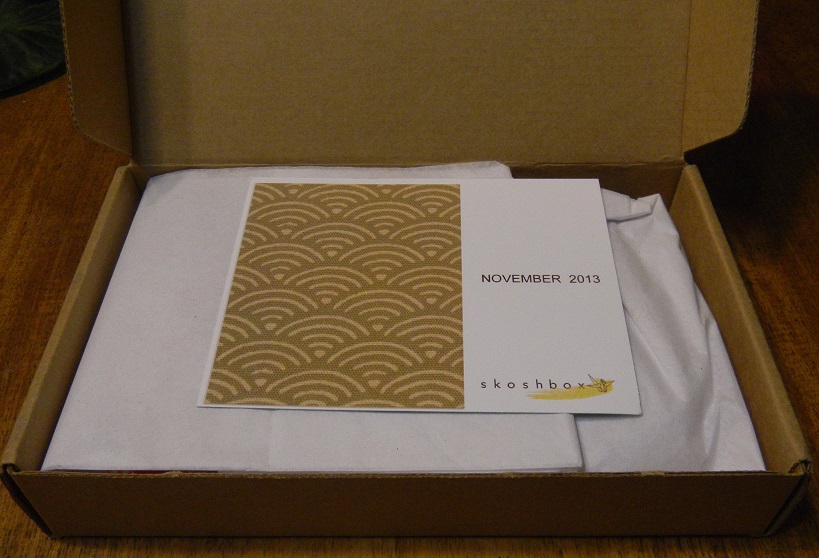 SKOSHBOX: NOVEMBER 2013
If Skoshbox seemed underwhelming when I received my first box, that feeling was amplified when I opened this box.  When I was in Utah, with no access to Asian snacks, the tiny portions seemed disappointing but not terrible.  But now that I'm within driving distance to multiple Japanese and Chinese grocery stores, the poor value of this box is all the more obvious.

I have since canceled my subscription, but I might as well review the last Skoshbox, since it's here. 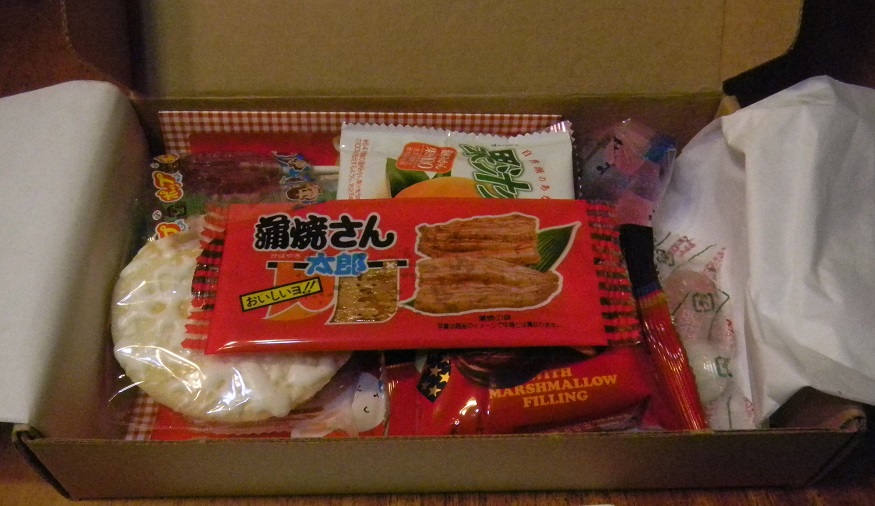 The box did have a decent variety of snacks this time.  There was still a disappointing lack of chocolate, but I was pleased to see gummies, hard candy, dried meat (something new to try!) and crackers.  But, as I said, the fact that they only give you one of each item makes the box seem less than bountiful. 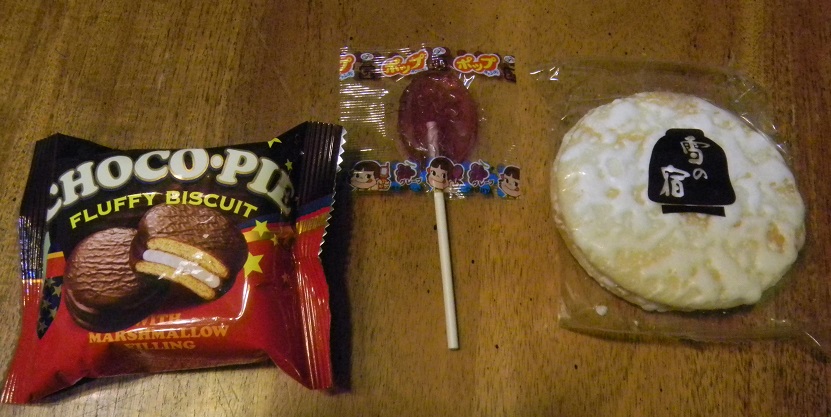 CHOCO PIE FLUFFY BISCUIT - This is very similar to a Moon Pie.  "Plain" vanilla cookies with a marshmallow filling, coated in milk chocolate.  The cookies are dry and crumbly, so the whole thing doesn't taste very fresh.  The generally "meh" flavor was made even worse by the fact that this is the only chocolate in the box.

FUJIYA LOLLIPOP - It's a lollipop.  Meh.  The only reason I have not yet tried to hand this off to one of my nephews is that Skoshbox describes it as similar to a soda pop candy that was in the previous box.  I liked the soda candy, so I might just like this lollipop.

YUKI NO YADO SENBEI - So the good news is I like these crackers!  They're rice crackers, nice and fluffy, with a satisfying crunch.  Sugar frosting is drizzled on top so there's a pleasant mix of sweetness and saltiness.  I could easily eat a whole box of these without realizing it. 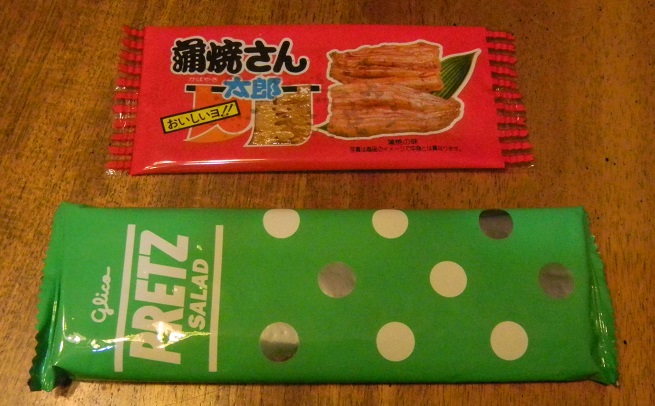 UNAGI STRIPS - The red package had a strip of meat jerky in it.  According to the Skoshbox label inside, it was either beef or eel.  When I opened it, it sure didn't look like any beef jerky I've ever had!  One bite proved that it was definitely eel.  Strong fishy taste, bizarre chewy texture.  Not too pleasant, to be honest.

PRETZ SALAD STICKS - I've seen plenty of boxes of Pretz over the years.  It's always shelved next to the Pocky boxes.  But I've never actually tried them, because why would you buy Pretz (no chocolate) when you could be eating Pocky (chocolate!)?  I'm not sure what "salad" seasoning is; this tastes salty with a slight herbal undertone.  It's an OK cracker, but again, where's the chocolate? 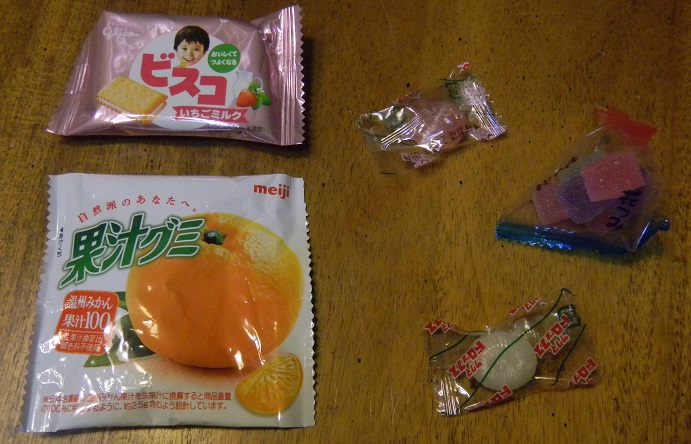 BISCO SNACK COOKIE - A small sandwich cookie with a strawberry creme filling.  It's OK.  Not too different from other sandwich cookies, except for the tiny proportion - the cookie is about the size of an USB drive.

ORANGE GUMMIES - You know what these remind me of?  Those vitamin gummies that they sell for kids.  It tastes a little more like an orange than the gummy vitamins do, but the size and texture are virtually identical.  Some boxes also had a grape version of these gummies.

SAKUMA DROPS - Supposedly, these are a traditional Japanese candy that was made famous by Grave of the Fireflies.  Since I've never seen that movie, I can't say that the connection means anything to me.  The flavor's a little more developed than American hard candies, but I wasn't too impressed.  The white was mint and the pink was...apple, I think.

HANATSUMI JELLY - The jellies reminded me a little of gumdrops, but they're a little softer, smaller, and much sweeter.  Each color had a vaguely fruity flavor, but while I could tell that each one was slightly different I couldn't positively identify any of the fruits.  They were really pretty colors, though - I can just imagine a bowl of these sitting on a table looking very cute. 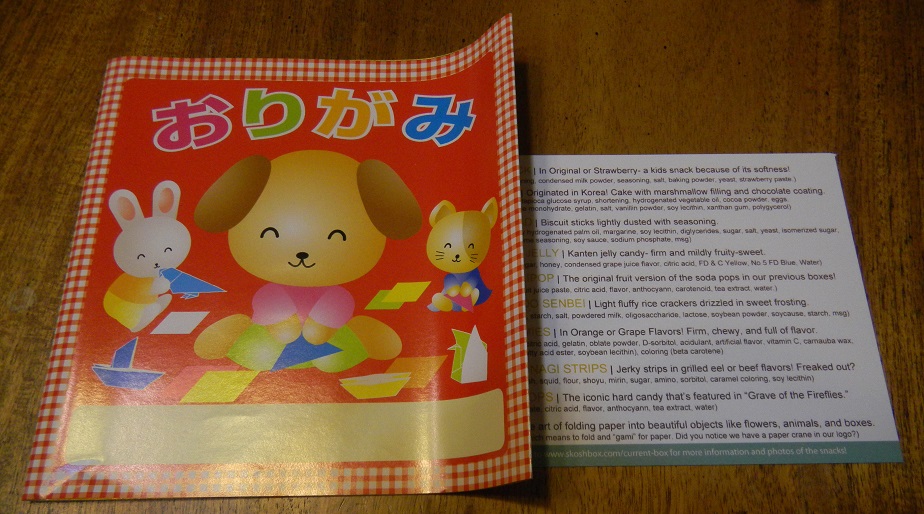 Each $12 Skoshbox is supposed to contain "snacks, candies and accessories".  The accessory this month was a thin pack of origami paper.  It only contained ten pieces, which I think is less than I get in an origami pack from Daiso!  Oh well.  I actually thought the origami paper was a decent idea for the box, but I have plenty of it already so it wasn't an exciting thing to receive.

And that's it from Skoshbox!  It was an interesting experiment, but the amount of product provided for the monthly charge just didn't add up to a good deal.
Collapse