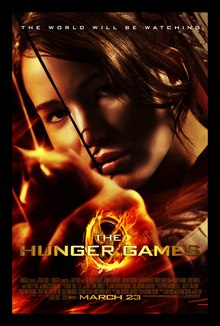 In preparation for the release of Catching Fire, the second movie in the Hunger Games trilogy, I wanted to re-watch The Hunger Games. Most of the paid streaming services now have the movie available, which was very convenient since I came up with this idea rather last minute.

Every year, a boy and a girl from each of the twelve districts – the “tributes” - are chosen by lottery to go to The Capitol and compete against each other in a survival death match to commemorate the defeat of a rebellion. The survivor becomes a hero and brings honor to his or her district. It is mandatory for everyone between the ages of twelve and eighteen to enter. Katniss Everdeen, of District 12, volunteers to become a tribute when her younger sister Primrose is selected. The male tribute for District 12 is Peeta, a boy who once gave Katniss bread from his family's bakery when she was starving. As the preparations for the Hunger Games begin, the two tributes train and work on their strategies. The twenty-four competitors are dressed up in fanciful costumes, interviewed by celebrities and treated like star athletes in the days before they enter the arena. She struggles to connect with the audience, but Peeta performs brilliantly by declaring his long-hidden love for Katniss. The arena, where the Games take place, is no place for romance, but Katniss is willing to play the role of “star-crossed lover” if it will give her the edge she needs to survive the Hunger Games.

First off, gold stars to the casting director and costume department! Most of the characters were exactly as I pictured them. Jennifer Lawrence was the perfect Katniss; a detached loner with flashes of strong emotion when it came to her family. Katniss is a difficult character because she doesn’t like to express herself vocally, so she spends a lot of time staring blankly at other people. Lawrence was able to bring a little bit of personality to these scenes with a flick of an eye or a slight facial twitch. Woody Harrelson brings all of Haymitch’s seediness and unpleasant demeanor to life, but manages to retain just enough of his good looks and charm that when Haymitch ditches his standard drunken stupor for schmoozing with the Capitol elite, one can see why they listen to him.

Speaking of the Capitol, I really enjoyed Caesar Flickerman (Stanley Tucci) and Effie Trinket (Elizabeth Banks) for their ridiculous personalities and over-the-top fashion. Seriously, I love Effie. She’s so serious about her job while remaining shallow and oblivious to the fact that she’s bringing kids to their death every year. I mean, she’s truly horrible. Caesar, too. When you stop and think about what he does – give a sympathetic ear to the tributes, letting them spill their secrets to the television audience before sending them off to die in the arena – he’s an awful person. But when he’s standing on the stage in his shiny suit and blue pompadour, it just seems like so much fun! No wonder the denizens of the Capitol can ignore the suffering of the districts; whenever Caesar was on screen I’d forget their problems, too.

I could go on and on, praising Lenny Kravitz (Cinna – goodness but the man rocks gold eyeliner!) and Amandla Stenberg (Rue – so adorable!), but I’ll just finish with a photo with the awe-inspiring breakout star of The Hunger Games: Seneca Crane’s beard. I could not tear my eyes from it, so great was my admiration of his facial hair.

Storywise, the movie definitely stands alone. I’d read the book before watching the movie, and there are several plot lines that had to be cut for time’s sake. Some of them I was disappointed to miss. For example, there’s a scene where Peeta’s father visits Katniss before she goes to the Capitol, giving her a bag of cookies. It’s nice because it highlights that this is a small town where people know each other, and that while Katniss doesn’t know Peeta well there’s definitely a connection between the families – which later explains how he could know her well enough to fall in love. It also sets up some later scenes in Catching Fire. But it isn’t necessary to the main plot, so I’m not surprised it got the ax. There’s also a subplot in which Katniss fails to assist a girl attempting to escape the Capitol’s guards, and later she meets the girl as a mutilated Avox, and she realizes that she could have a made a difference. Again, not important to the core story, but interesting.

But one significant addition to the story that I really enjoyed is all the “backstage” access at the games. The books are all told from Katniss’ perspective, so things that she doesn’t see – like the large staff programming the games or the execution of the game maker – can’t be shown. The movie’s freedom to explore these behind-the-scenes places really helps to round out the world of the Capitol.

All in all, I think that this is a very successful adaptation of the book to the big screen. Watching it again has really helped kindle my interest in seeing Catching Fire!
Collapse