Sequel to The Hunger Games.
I reviewed the book back in January.

THIS POST CONTAINS SPOILERS FOR THE BOOK AND MOVIE!!! 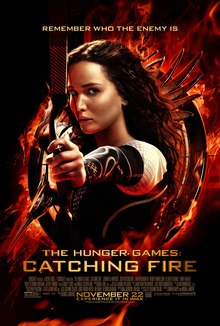 Against all odds, Katniss and Peeta won the Hunger Games together, becoming the first pair of victors in the history of the games. They are finally safe. But President Snow, leader of Panem, is furious that the two teens from District 12, poorest of the districts, found a way to beat the Capitol’s power. As their defiant act inspires some districts to rebellion, Snow confronts Katniss with an ultimatum: if she cannot convince the districts that her actions are driven by her love for Peeta, not a desire to throw off the Capitol’s control, he will have her executed and those she loved punished severely. Worse, the Capitol has a nasty trick up its sleeve for the upcoming 75th Hunger Games that even Katniss and Peeta never anticipated…

Peeta (Josh Hutcherson) has improved quite a bit from the previous film. I wasn’t sure if I was watching a poor performance or a great one in the last movie, because Peeta is written as a dreadfully dull character and there’s only so much an actor can do when he spends half the movie lying on his back. Peeta is much more interesting this time around, largely because he’s actually doing something. He paints a subversive portrait! He fights! Sure, he still does the damsel-in-distress routine once or twice (we all know Katniss wears the pants in this relationship) but if you want to create more interest in the Katniss-Peeta-Gale love triangle, it helps to make the men as compelling as the woman. Gale (Liam Hemsworth) also benefits from slight character revision. In the book, he gets whipped after he’s caught poaching turkeys on Capitol land; in the movie, his whipping is because he lashed out at a Peacekeeper when he saw them burning the town’s black market and beating up the sellers. It seems a little nobler, don’t you think?

Let me randomly sidetrack for a moment and say that the focus on food that is so prevalent in the books has largely been erased in the movies. In Catching Fire, Katniss’s attention constantly drifts to food, whether it is the cheese bread Peeta bakes especially for her, the game she and Gale are hunting in the woods to feed his family, or the seafood and district-oriented rolls she eats in the arena. It’s a constant reminder that she grew up hungry, and that people in the districts are starving - and thus, the excesses in the Capitol are even more horrific. In the movies, it’s mentioned once or twice that people are starving in District 12, but we don’t see it in the same desperate way.

Once again, my hat goes off to the casting director. There are two new actors that I felt were especially well-matched to their roles: Finnick Odair (actor Sam Claflin) and Johanna Mason (Jena Malone).

Johanna Mason is a perfect foil for Katniss. The two girls are similarly ruthless and focused on winning, but the way these traits manifest are wildly different. For example, Katniss remains as reserved and tongue-tied as ever; when she and Peeta are traveling throughout the districts on their victory tour, she is perfectly content to let him do the talking. Johanna would never let anyone speak for her. When she arrives in the Capitol she is furious that she has to fight a second time, and she lashes out: first at Caeser in her pre-game interview, and then in a memorable diatribe at the arena’s designer Plutarch Heavensbee and President Snow. Johanna was certainly a prickly pear in the book, but on the movie screen her rage makes it impossible to tear your eyes away from her.

Finnick is just so darn likable. In the chariot scene, he shows more personality in a few minutes than Peeta displays in all 142 minutes of The Hunger Games. Good job, Claflin!

I also found myself strangely delighted with Effie. I know she’s a shallow, silly representation of all that’s wrong with the Capitol, but movie Effie is so much more sympathetic than book Effie. Yes, she’s still obsessed with etiquette and her social station, but there’s a crack in that façade. During the reaping scene, when she knows that she will be condemning Katniss and Peeta to die, she’s visibly distraught. Later, she suggests that they all wear something gold do show that she, Katniss, Peeta and Haymitch are a team. Yes, it’s superficial, but given Effie’s creative limitations I think that it’s probably the best solidarity gesture that she is capable of conceiving. As she emphatically repeats, “We are a team!” and you realize that Effie is aligning not with the Capitol but these outcasts from District 12 – well, I’m touched, and I really hope that her character is given a chance to develop further in the next two movies.
Of course, my fondness for Effie may have nothing to do with her character development and everything to do with our shared love of Alexander McQueen. One never can be sure of these things.

A lot of what I had to say about The Hunger Games is true here. A lot of details and subplots had to be deleted or merged to make the story film length. Freeing the viewer from Katniss’ perspective means that we can spend more time with other characters, like listening in on President Snow and Plutarch Heavensbee as they carefully manipulate the press to alienate the districts from Katniss by making her seem shallow and silly. Actually, the movie does try to humanize President Snow, who is little more than a Big Bad in the Catching Fire book. There are two scenes in which he’s with his granddaughter, and she expresses admiration for Katniss both times, which disturbs him. But Snow is also shown to be more of a bastard: in the book, it’s implied that Snow may have tampered with the Quarter Quell’s rules so that former victors would re-enter the arena, but in the movie it is made explicit that this change was retaliation.

I’ve enjoyed the Hunger Games books (although I’ve not yet read Mockingjay) but I really think the movies are better. The story is more concise and focused, and these actors are really bringing new life to the characters. It’s really an enjoyable experience. Even though I am not happy about the last book being split into two separate films (stupid Harry Potter should have never set that precedent!) I’m looking forward to Mockingjay Part One when it hits theaters next year.
Collapse