Every year, the Buckleys have a sock party. I’ve written about it before, but to quickly recap: every member of the family has a red stocking with their name on it. Everyone buys something, traditionally under $5 but modern times has stretched the limit closer to $10, for everyone else’s sock. When it’s your turn, you slip your presents into the appropriate sock, and after everyone has deposited presents the socks are opened one at a time, usually starting with the oldest or the youngest person and working down through the family.

Personally, I find the sock party stressful. The expense ranges from $150-$200, which doesn’t sound like much until you realize that Seanie and I still have to buy “regular” presents for everyone, too. Finding a balance between a gift that’s useful/desirable AND in the price range is a challenge. Half the time, I’ll think we found something great only to have the recipient announce upon seeing it that they will give it away to someone else. If the family wanted to get rid of this tradition, I would be happy – but the Buckley boys all seem to love it so I doubt it’s going anywhere.

Getting all of our sock presents in time for the party was pretty tough this year. I had bought some things when I was in Utah that I thought might work for some people, like handmade traditional games and “real salt” samples. But Seanie and I had quite a time finding things for everyone! It took several days of shopping at stores like Ross and Affordable Treasures and some serious on-line efforts to get two presents for everyone. But in the end, we managed, although in the process we developed a running joke that will haunt our conversations evermore:
Pumpkin? I panicked. I bought you a fondue set.
Rhi, I panicked. I bought you a year’s worth of cheez doodles.
Jared, I panicked, so I bought you this portion control scale.

Thankfully, none of the actual gifts we bought were inappropriate. Seanie’s brother Terry had mentioned that he wanted something to stretch his shoes, so we got him a Shoe Genie. Rhi used to do origami a lot, so I found an origami post-it note pad. For the twins, we kept it simple with stickers and bubbles. Between quirky little tools, little games and cute office supplies we managed to take care of everyone.

I got some really cool things in my sock this year. Jared found a wax seal set for me, which I love. Erin had picked up a jar of Merlot Jelly when she visited a winery – I don’t drink wine but I actually like grape jelly, so I’m curious how this will taste. Seanie’s aunt Dianna gave us a produce keeper to help keep fruit and vegetables fresh in the fridge – great! Rhi found giraffe socks and a giraffe necklace for me – usually giraffes are a Seanie thing but I guess they are spreading to me, since I don’t have an established animal that gifts can default to. (Although DINOSAURS, people!) Rhi also got everyone an extendable two-prong fork for roasting marshmallows, since everyone used hers during our camping trip in June. Throw in a sea salt chocolate bar and a clementine and it was a great sock!

It was really fun to watch the kids. Arlo wanted to help everyone open their sock – it wasn’t that he was interested in what they got, per se, he just really liked opening stuff. The surprise factor, I suppose, was too much to resist. Liam was less engaged in the process. Once he’d opened his own sock and gotten new toys, he was more focused on playing with his new matchbox cars instead of paying attention to the adult’s presents. As it should be when you’re not even three years old. 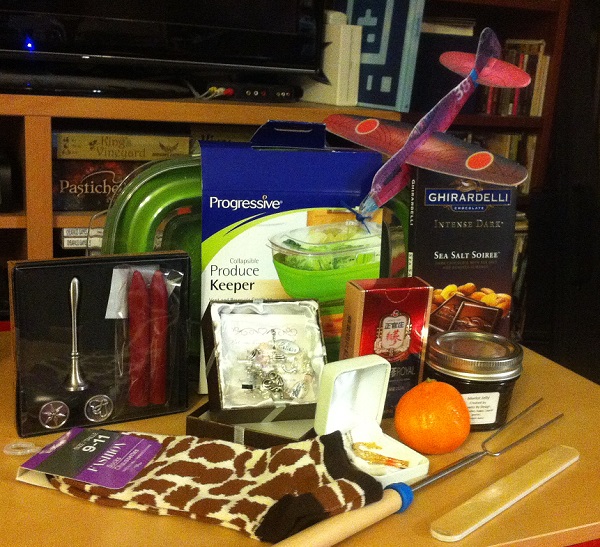