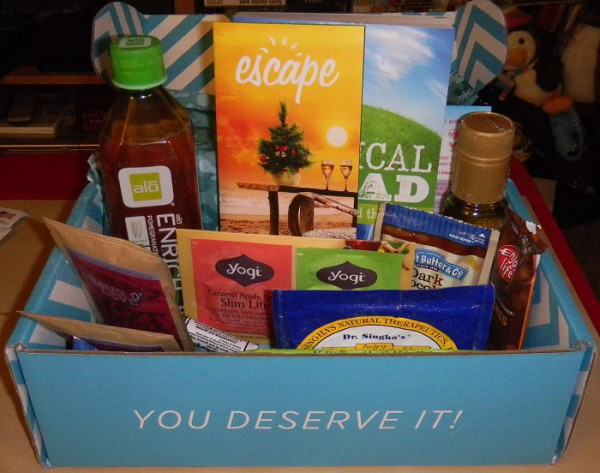 Escape Monthly is a vacation-themed subscription box. Each month, one subscriber is randomly chosen to "win" a trip to the themed location! This box, however, is a bonus box - a one-off special edition that is not part of the regularly monthly subscription.  The Holiday Bonus Box joins the sights and scents of the holiday season with the intrepid spirit of the traveler, creating a sense of adventure and wonder.  At least, that's what I'm hoping.

You might be wondering why I'm reviewing a holiday box in January - shouldn't it have been one of my December entries?  Yes.  Yes, it should have.  Unfortunately, my box seems to have taken a detour en route to me, because it didn't arrive until after Christmas - and it was mightily battered, too.  When I opened it, everything was covered in a fine white powder with a strong, herbal smell.  As I removed items from the box, wiping them off so that they'd photograph somewhat decently, I found that many of the food items felt broken.  Escape Monthly has said that replacements will be sent, but in the meantime I want to look at what I received before we get too deeply into January. 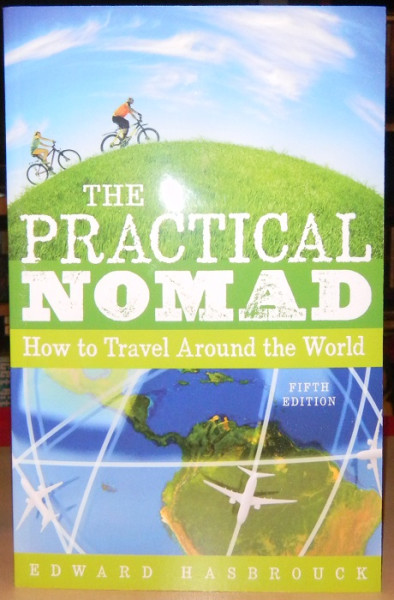 Now, as you may remember from my previous posts, Escape Monthly lists a retail price for each item in the box, which initially seems great - but my personal research has often turned up very different numbers. To simplify things, I'm going to use the following system: Escape Monthly's price will be listed first, in italics, followed by my price in bold.


The Practical Nomad: How to Travel Around the World by Edward Hasbrouck: I haven't the slightest idea who this Hasbrouck guy is, but the book he's written offers lots of very practical advice about getting around the world.  It's geared toward someone with a lot of spare time - say, a trip of a month or longer - who wants to do some country-hopping.  (That's the dream, isn't it?)  Still, he has some good suggestions for finding cheaper airfare, knowing what to pack and navigating the sometimes baffling world of visas and other travel documents.    $21.99 / $21.99 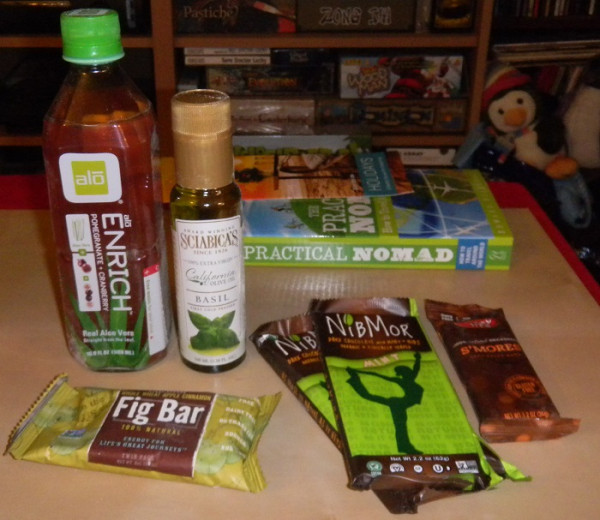 Some of these items really don't make me think "holiday" at all...

Alo Enrich Pomegranate & Cranberry Drink: Aloe vera, pomegranate and cranberry?  This sounds healthy, chock full of antioxidants and vitamins.  I guess the cranberry is the holiday connection?  The drink is local, according to the bottle - crafted in the San Francisco Bay Area.  Of course, it also says it's manufactured in Taiwan so maybe the bottle doesn't know what it's talking about...  I can't remember if I've had aloe vera juice before, but I'm always game to try something new! $2.46 / $2.33 ($28 for 12 on Alo's website)

Sciabica's California Basil Olive Oil: Another California item?  Well, I guess the first Escape Monthly box was Napa, so California must still be on their mind.  I do love basil and I do love olive oil, so I'm sure this will be delicious on pasta!  The bottle included in the box is 100ml, which is less than half the size of the smallest bottle sold on Sciabica's website.  I'm valuing it at half the cost of the 250ml price tag. $10.90 / $5.50

Nature's Bakery Whole Wheat Apple Cinnamon Fig Bar: Apple cinnamon = apple pie, a traditional Christmas dessert.  Fig = figgy pudding, a food immortalized in a Christmas carol.  Yet somehow, this fig bar does not make me think of the holidays.  I guess it was a nice try, Escape Monthly.  These sell for $1.25 each at my local REI - maybe I'll get my dad some of these for his hiking expeditions instead of my usual birthday gift of several boxes of Cliff Bars. $2.00 / $1.25

Nib Mor Dark Chocolate Mint Bar x 2: I love chocolate mint, it's my favorite flavor of ice cream and Ghiradelli square.  I was really excited that not one, but two of these chocolate bars were in the box.  Then I picked one up and realized it had been smashed into about a dozen pieces.  I picked up the second bar, and it was in similar condition.  Le sigh.  I'll eat them anyway, because I'm a chocolate glutton, but so much for "giving one to a friend" as the brochure suggests.  I can't actually find these for sale online anywhere - even the company's website doesn't have them in stock - so I'm just going to have to use the $5.00 each price tag provided by Escape Monthly. $10.00 / $10.00

Enjoy Life S'Mores Bar: This is a very bar-heavy box, isn't it?  I get that bars make great snacks when you're on the road, but it seems excessive because when I think of the holidays, I tend to think of things like honey-baked hams, candied yams and glittering pine trees.   Bars seem too...casual for a holiday box.  But I do love S'mores-flavored everything, so maybe I'll shut up now. $2.00 / $0.90 (Pack of 5 from Amazon) 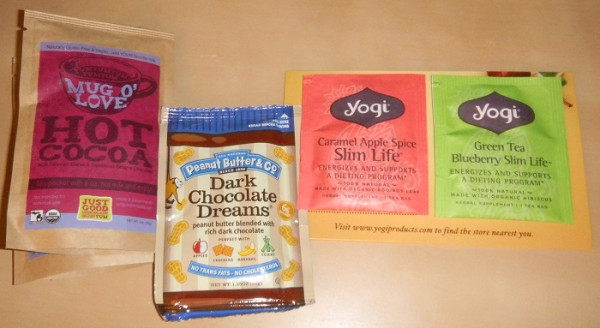 Mug O' Love Hot Cocoa x 2: I just got one of these in my Italy box and I'm still not sure how to value it.  If a 12 oz bag costs $8.95, then a 1 oz bag should be...75 cents?  Toss in the packaging and Escape Monthly's $1.00 estimate might actually be about right.  But putting aside price tags for a minute, I've got to say that the hot chocolate is actually pretty good.  Very flavorful.  Also appropriately holiday-related. $2.00 / $2.00

Dark Chocolate Dreams:  It's Nutella!  No.  It's a dark chocolate spread?  Yes, but blended with peanut butter.  So it is Nutella - just a different kind of nut.  Yum.  It's going to be like eating melted Reese's cups, isn't it?  I see this all the time at the grocery store, though, so it's not what I'd consider an exotic "travel" item. $1.00 / $1.00

Yogi Tea Samples: Caramel Apple Spice and Blueberry Green Tea both sound like tasty flavors.  Yogi Tea isn't exactly a premium brand, though.  A box of sixteen tea bags costs between $3.00 and $3.50, so at best this is fifty cents' worth of so-so tea. $1.00 / $0.50 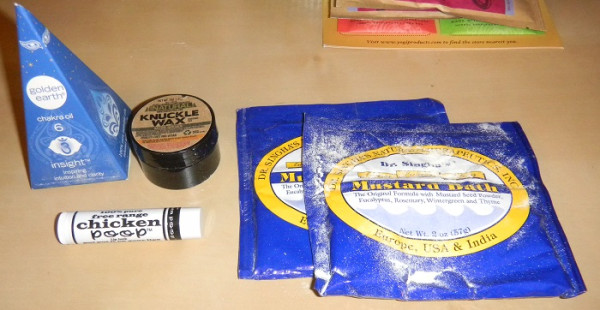 Golden Earth Chakra Oil Pyramid: Chakras are points of energy in your body; there are seven chakra centers and these essential oil blends are meant to address imbalance in a specific chakra.  I got Chakra 6, the third eye, which when out of balance can cause allergies, sinus problems, stress and pessimism.The oil blend has rosemary and lavender, infused with lapis lazuli (what does that mean, infused with a rock?) so I might try it as a sleeping aid, because lavender oil often makes me woozy.  I'm not sure I'd pay $24.00 for this little bottle of essential oil, though. $24.00 / $24.00

Knuckle Wax All Natural Skin Balm: Uh...is this meant specifically for knuckles?  That is a truly specialized moisturizer.  It is very waxy, with a slightly off fragrance.  I don't know if I'll use this, even though my skin is always painfully dry.  It seems too thick to be used on a regular basis. $8.95 / $8.95

Dr. Singha's Mustard Bath: Dr. Singha's bath powder exploded all over my box, which is why it smelled so strongly of herbs when I opened it.  I do love bath stuff, so I think it was a good idea to include this in the box, I'm just disappointed that one of the packets is empty now. $6.50 / $3.25

Chicken Poop Lip Junk: I don't care how awesome this lip balm may be.  No one wants to put something called "chicken poop" on their lips.  Also, again, what does this have to do with the holiday season? $3.00 / $4.00


This box strikes me as a bit of a free-for-all.  It seems less like a collection of items with a unified theme as the leftovers from the first set of Escape Monthly boxes cobbled together haphazardly into a bonus box.  It cost me $39.99, so even with the loss of a bath packet and some severely smashed candy bars it's a good deal.  I just thought the box would be a little more...festive.

If you want to know more about Escape Monthly or wish to subscribe, please consider using my referral link: http://mbsy.co/hjDG
Collapse