Kneehigh is back! Britain’s beloved theatre company returns to the Bay Area with a glorious story of love. King Mark rules with his head, until he falls head over heels for his enemy’s sister. Based on an ancient tale from Cornwall, Tristan & Yseult revels in forbidden desires, broken hearts, grand passions, and tender truths. It’s another marriage of gorgeous music and ingenious staging from the acclaimed creators of Brief Encounter and The Wild Bride. Embrace comedy and spontaneity in this West Coast premiere for an irresistible night of love! 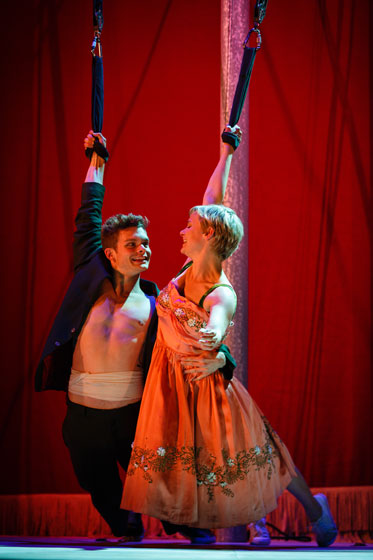 The story of Tristan and Yseult is one of the best-known medieval romances, immortalized by Thomas Mallory, Alfred Tennyson, Richard Wagner and countless painters. The Cornish King Mark, after defeating the Irish ruler Morholt, sends his adopted son Tristan to fetch Morholt’s sister, Yseult, to be Mark’s wife. As they sail across the sea from Ireland, Yseult and Tristan drink a love potion, which drives then uncontrollably into each other’s arms. Yseult dutifully marries the king, but secretly continues her tryst with Tristan despite her fondness for her new husband. A jealous courtier tattles to the king about the affair, and the lovers are cast out into the forest. Eventually, the power of the love potion fades, and Yseult returns to her husband while Tristan marries another woman. But their love was more than the magic of a potion, and the separation cannot last.

Kneehigh Theatre’s production of The Wild Bride was so unusual and artistic that when I heard that another of their shows had been brought to Berkeley, I had to see it. The show did not disappoint, although I think it was a bit more inscrutable than last year’s fairy tale. Where to start?

It was staged on a raised platform rather like a great big wooden wheel. On a raised stage behind it, a band played music throughout the show. I liked that the band was given such a place of prominence, and that you could see the musicians as they worked. A beautiful woman called Whitehands was the lead singer for the band as well as the story’s narrator. She was the leader of a group of sadsack men called the Lovespotters, who watched the action on the stage but could never participate because they were unloved. When a character in the cast was killed or tossed aside, a member of the Lovespotters would go up to him or her and offer a jacket and ski cap, the costume of the Lovespotters, and the rejected player would join them on the sidelines. It was a really good way to “recycle” characters while keeping the cast down to the minimum number of actors.

There are many versions of the Tristan and Yseult story. I had always thought it tied somehow into the Arthurian legends, but there was no mention of King Arthur in Kneehigh’s play so perhaps I was mistaken on that. It’s a very odd play, though. Tristan speaks many of his lines in French, while Yseult speaks in a European language I don’t recognize. I’d guess Hungarian or something else from Eastern Europe. It definitely didn’t sound like English or Gaelic, so I’m not sure why Yseult was using it. At any rate, a member of the Lovespotters would reach out and touch their lips and suddenly Tristan and Yseult would speak in English instead. Once translated, their characters sounded fairly normal, while King Mark words were always in the poetic, highly stylized manner of a Shakespeare play. It was quite strange, although I suppose that a medieval king might have a very courtly way of speaking.

Still, I’m left by many questions. In the battle with Morholt at the beginning of the show, Tristan is seriously injured, but King Mark immediately sends him off to Ireland to retrieve Yseult. Shouldn’t Tristan, like, be treated by a doctor first? Naturally, by the time Tristan gets to Ireland he’s pretty much dead, but Yseult is able to heal him when she stumbles across his ship. The potion may inspire lust in these two, but it’s not all that drives their romance, because after its effect wears off Tristan and Yseult are still in love. I mean, Tristan pretty much dies of a broken heart (or that same stab wound that nearly killed him at the beginning) as he waits for Yseult to return to his side. It’s very weird – was he bleeding this whole time and the magic of Yseult’s presence (for she’s apparently an amazing healer) kept him alive? Or is it a new wound and we never saw how he got it? Very unclear.

Kneehigh knows how to entertain an audience with theatrics. The lovers are literally lifted from the ground with the force of their lust. A courtier spies upon them after being hoisted up above them like a spy in an over-the-top action movie. Whitehands and her band perform blues, country, rock and big-band music throughout the show, and the singer (Carly Bawden) and the musicians are so talented that their concert alone is worth the price of the ticket.

It’s an entertaining show, but a strange and puzzling one. I think that I’m still processing it, because Tristan & Yseult is so different from other plays.
Collapse