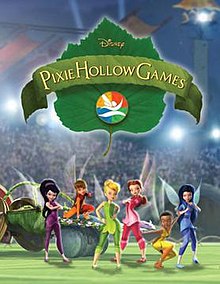 It’s time for the Pixie Hollow Games, the fairy world’s version of the Olympics, and all the different fairy groups (tribes? families?) are getting ready to compete. Historically, the garden fairies perform terribly during the Games, because they are more interested in creating beauty than performing feats of athleticism, but a new garden fairy named Chloe believes this is the year they can turn it around. She is partnered with Rosetta, who would do just about anything to get out of participating because she hates getting dirty, but none of the other garden fairies will trade. Chloe’s enthusiasm eventually inspires Rosetta to throw aside her fears and embrace the competition, learning that sometimes it’s OK to get dirty.

I almost didn’t bother to review this, even though I’ve written up all of the other Tinker Bell movies, because it’s not quite a movie. Originally titled Tinker Bell: Race Through The Seasons, this was intended to be a feature-length video release, but at some point Disney retooled the story into a half-hour TV special that ran on the Disney Channel. But Seanie and I ended up watching this on Amazon not too long ago, so I might as well talk about it.

This is the first Tinker Bell movie in which Tinker Bell is not, in fact, the main character. In fact, I doubt the tinker fairy had more than one or two lines in the entire show. Seanie and I were quite surprised by this, but it was a refreshing change. It was really nice to learn more about one of the other fairies, even if Rosetta is not necessarily the fairy I would have chosen. Her prissiness is funny, and through her the movie is able to get across a few good messages for the kids: sometimes you have to conquer your fears but you just may end up liking that which you hated, and sometimes you need to do something you dislike for the sake of the team. Chloe, the one tomboy in the Garden fairy family, reminds girls that it’s OK to like sports and being active. (I don’t know why Disney felt the need to invent a new character to share this message; Fawn the animal fairy can also fill this role pretty well.)

The short also expands the fairy world even more by introducing yet another type of fairy with the Storm Fairies, whose team has dominated the Games for the last several years. Glimmer and Rumble, who appear in this cartoon and I suspect never again – don’t get enough screen time to really showcase what a Storm Fairy does, which is disappointing. We also don’t learn much about the history of the Games and why Pixie Hollow has them. No doubt these things would have been expanded on if the movie wasn’t chopped down for TV.

This isn’t much of an addition to the series, but it is cute and it is entertaining. Mostly, though, it feels like a wasted opportunity. If Pixie Hollow Games had it been allowed to remain full-length other fairies besides Rosetta could have been developed, or we could have learned a lot more about Pixie Hollow history and culture. But watch the movie for what it is, and not what it could have been, and it’s alright. Most eight year old girls who are fans of the series will eat it right up.
Collapse