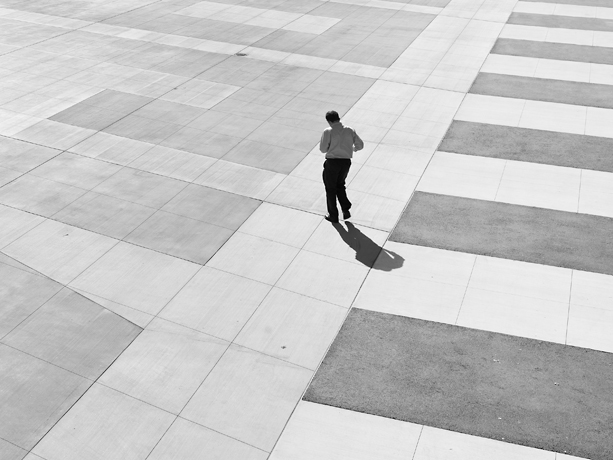 
Alec Soth: Silicon Valley (2013)
Seventh post in a series about the installations that are in the San Francisco Museum of Modern Art's Project Los Altos program

Asked to capture Silicon Valley through his camera lens, Alec Soth described the challenge thus: “Whether it is for gold or citrus or celebrity, California has always attracted dreamers and prospectors. What is so fascinating about the most recent rush in Silicon Valley is that the harvest is invisible – the gold is in the cloud.” Getting this ethereal, invisible “cloud” to appear in his photographs of physical objects and places became the goal. For his subjects, Soth went to the sacred places and hallowed spaces of some of the biggest names in technology – the campuses of Google and Facebook, or the garage where Steve Jobs founded Apple.

His photos have a very haunted quality. Many of the photos show solitary human figures, or empty spaces. A single man walks across a wide thoroughfare at the Facebook campus. A group of men and women all gaze up toward a screen above the photographer’s head instead of engaging with each other. Men’s faces are obscured by the technology they work with on a daily basis. Loneliness pervades many, perhaps even most of the images.

This seems quite curious to me, because I don’t consider Silicon Valley a lonely place. Is it because I’m too deeply in the SV bubble that I can’t see the isolation, or is it something being imposed by an outsider’s perspective? (The artist grew up in and still loves and works in the Twin Cities.)

Certainly, it’s interesting to me that things I’d consider commonplace and dull capture the attention of someone from the Midwest. Like any kid who grew up here, I know that Steve Jobs, Hewlett-Packard, and other major tech companies started in a garage – but it never would have occurred to me to seek these sites out in some sort of technology pilgrimage. Apparently, a decent number of tourists take the time to hunt these locations down. Odd.

In one of the brochures we hand out to visitors, there’s a quote from Soth about his photographs: “I wanted to strip the pictures of color and shadow and depict the whiteboard of possibility this place represents.” His photographs are certainly stripped down, devoid of people or identifying marks. I’m not sure that his scenes read of possibility, though. Some of his pictures look more post-apocalyptic than of a Promised Land. They’re also somewhat limited in scope. I’m surprised that there’s no reference the never-ending cycle of boom and bust that is such a strong part of Valley culture. Silicon Valley is also so much more than a technology hub, but you’d never really know that from these photographs.
Collapse