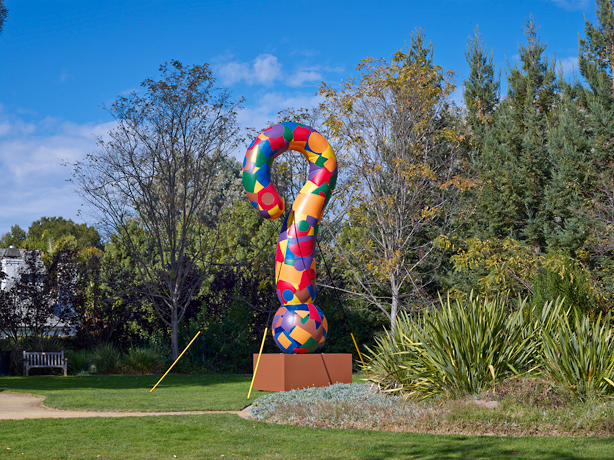 Of all the artists represented in Project Los Altos, Chris Johanson has both the least and greatest exposure. No gallery space is dedicated to him, but he has five large outdoor installations scattered throughout the downtown area. His pieces are easily stumbled upon by the residents of the town, but visitors looking only in the galleries will never see his work. I haven’t even visited all of his installations because some of them are just far enough from State Street, where the rest of the pieces are housed, that to find them is inconvenient after a day of standing. 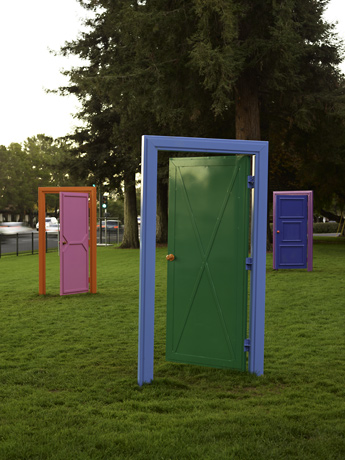 Of all his sculptures, the Johanson I interact with most frequently is Door Sculpture to Talk About the Idea of Different Possibilities You May Have to Process Your Life. It is a trio of doors, brightly painted and stark against the green grass and evergreen trees of Lincoln Park. Each door is open, inviting visitors to venture through and enter a new world or realm of possibility. Of all the pieces in Project Los Altos, this is the most popular one for social media – almost every time I walked by the park I would see a young mother or teenagers holding a smart phone up while kids or friends posed in one of the doorways. It was cute.

I did it, too. It’s hard to resist!
The installation I am most curious about is You Have Seen It Before and I Hope You See It Many More Times, an eight-sided mirror installed on the back of 242 State Street, the building that houses the Jeremy Blake and Spencer Finch pieces. In Chinese culture, eight-sided mirrors are placed on the exterior of homes to protect them from ghosts and bad fortune. (At least, that’s what the lady leading a Chinatown ghost tour I joined several years ago claimed as she pointed out the bagua mirrors placed over doorways.) The Blake exhibit is themed around the Winchester Mystery House, one of the most famous “haunted” mansions in America. I can’t help but wonder if Johanson knew that this installation would be connected with the Blake piece, and intentionally played with the concept of bagua mirrors for this piece? If I ever met him, I’d have to ask. 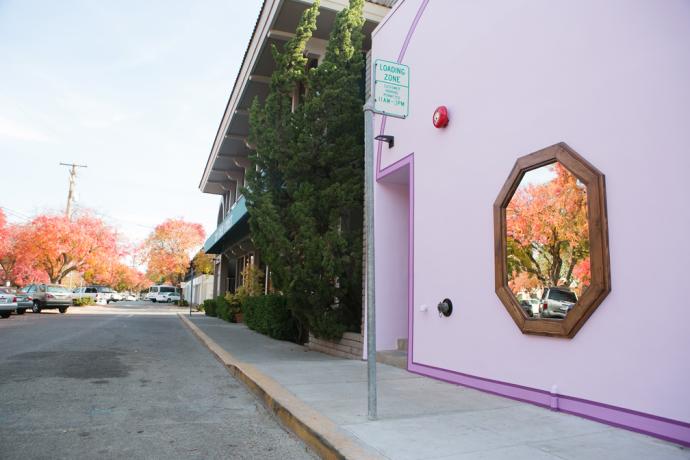 I also would like to know if Johanson is responsible for the purple exterior - the front of the building is modern and black.
I Do Not Know But Am Open to Learning is a nylon balloon question mark. The fabric of which it is comprised is all recycled (I don’t know from what) and it’s twenty feet tall. It’s very colorful and dramatic. A few days ago some punk smeared dog poop on it, but that’s the only major act of vandalism I know of to any of the Project Los Altos pieces – not too bad for the duration of this installation!

Two other sculptures are part of the exhibition, but they are the ones I’ve never seen so I can’t really say much about them. In a historic orchard, The Field Became an Orchard Became a House and Became an Orchard (in Los Altos) places an old “upcycled” door around the roots of one of the old trees so that it looks like it grew up through the small window set in the door’s face. The other sculpture is one that I likely walked by several times and ever noticed - If You Are Open to It You Can Find a Sign That Can be a Sign is a little green sign like that found on street corners, sticking out of the side of a building with the words “SO YOU CAN THINK ABOUT WHAT YOU MIGHT DO” painted in white block lettering. I’m not sure how many people took the time to investigate these pieces, but I know that in spite of their diligent searching, a few of the visitors I talked to were unable to find the orchard sculpture.
Collapse