Entry #2 in the Pixar Movies Challenge! 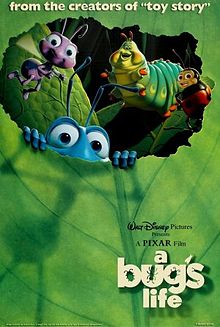 An inventor ant named Flik accidentally unleashes the wrath of the grasshoppers when one of his creations destroys their food supply, gathered all summer long by the worker ants. To get him out of the way, Princess Atta sends Flik to find “warrior bugs” to protect the colony. To the ants’ shock, he actually succeeds, bringing back a troupe of highly specialized bugs. Unfortunately, there’s been a great miscommunication: the “warrior bugs” are actually circus performers who believe they’ve been hire to entertain the ants. With the grasshoppers returning soon, Flik realizes that he must work with the circus bugs and maintain the deception to save the colony.

Oh, Bug’s Life. This is the only Pixar movie that I haven’t seen before, and to be honest I’ve never really wanted to. Bugs, ick. But I had to get through this movie if I wanted to see Toy Story 2, so here we go.

The story is actually a pretty fun take on Aesop’s The Ant and the Grasshopper. The grasshopper doesn’t want to work, so he coerces the ants to gather food for him. Great idea! The “warriors” are nothing but a scam, circus performers giving the greatest performances of their lives? Awesome! But something in the execution of this story is lacking. It might simply be that ants aren’t engaging or cute, even if you give them giant eyes and paint them with pretty pastels. They’re BUGS. (Home on the Range faced a similar problem with cows.)

Maybe it was Flik’s fault. He’s very bland and inoffensive and forgettable. I understand that we should feel sorry for him because no one understands him or appreciates his creativity, but if he is constantly causing problems for the other ants because of his inventions and not finishing his share of the work, then yes – the other ants are correct to tell him to knock it off.

The other characters didn’t interest me much, either. Again, conceptually they’re interesting, but as a unit they lack punch. Looking over the cast list, I notice that most of the characters are voiced by mid-90s TV sitcom stars. Perhaps this is why they all sound a bit boring – celebrities may be great actors, but it doesn’t always translate to great voice acting. Or maybe it’s just that there are so many characters that they never really develop beyond one-note personalities.

Animation looks good. Really good. Compare A Bug’s Life to Toy Story, and it’s amazing to see how far Pixar had come in just three years. The textures of the leaves and the landscape scenes are a vast improvement over the backgrounds of Toy Story. The ants are pretty simple, but the grasshoppers and their mottled skin is really well-designed.

But again – it just isn’t a very entertaining movie. It’s as if the creative team was so focused on wowing the audience with the great leap forward in animation that they forgot to give proper attention to the story. I was frequently bored. Perhaps if I’d seen this when it first came out, the newness of the animation would have wowed me. From the perspective of 2014, A Bug’s Life is merely OK, and one of the weakest films in Pixar’s oeuvre.


5/10 star.
I’m sure there are plenty of people who disagree with me, and that’s fine.
Collapse