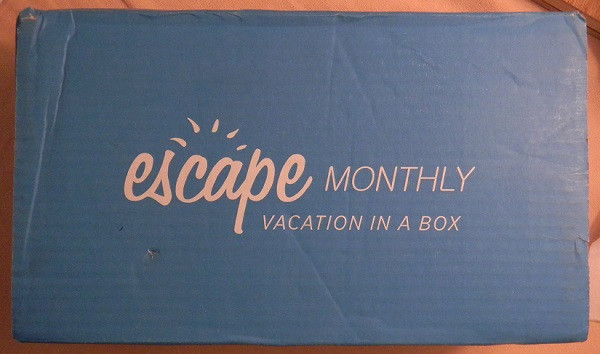 ESCAPE MONTHLY
APRIL 2014: MEXICO
I have to admit, when I first heard that April's box was Mexico, I wasn't very interested.  Living in California, I am in a city heavily influenced by Mexican culture, and if I want Mexican stuff all I have to do is go to the local Hispanic market.  But who knows?  Maybe Escape Monthly will surprise me with something truly "only in Mexico".

From the Escape Monthly Mexico travel brochure:
Hola?  Como estas?
As the 13th largest country in the world, there's much more to Mexico than just countless beautiful beaches, incredible rain forests, and a tropical climate.  Mexico is truly a place full of hidden discoveries and rich history.
Inside you'll find some products that capture Mexico's unique spirit.  This month, we encourage you to indulge your sweet tooth, and we know these tastes and sensations will take you on a journey far from home!
So go ahead, put up your feet and enjoy the sights, sounds and tastes of Mexico! 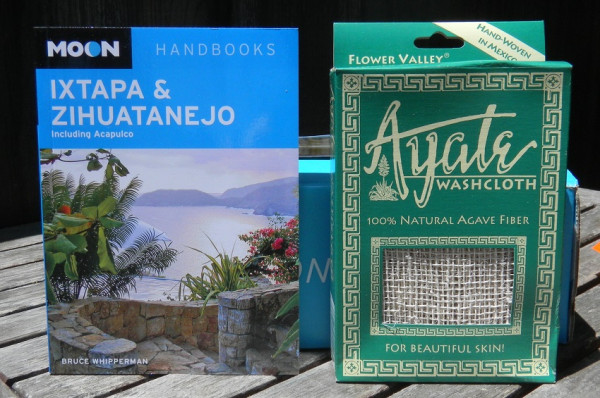 MOON HANDBOOKS Ixtapa & Zihuatanejo Travel Guide: Thank goodness.  I was really worried they were going to send a "How to Live Abroad in Mexico" as they've done with other destinations outside of the United States.  I mean, I've heard that Mexico is a popular place for Californians to retire, but I certainly don't want to live there.  But I have long desired to visit Mexico, and with this book I finally have the tool I need to start planning a trip. $17.99
AYATE Exfoliation Washcloth: Woven from agave fiber, this washcloth is more resistant to mold than a loofah and is based on the weaving techniques used by indigenous Mesoamerican cultures.  It feels very rough on my skin, and looks like an loosely-woven burlap.  I'll certainly try it out, though - if it proves too rough for my skin, I bet it'll work great for scrubbing the dishes. $7.95 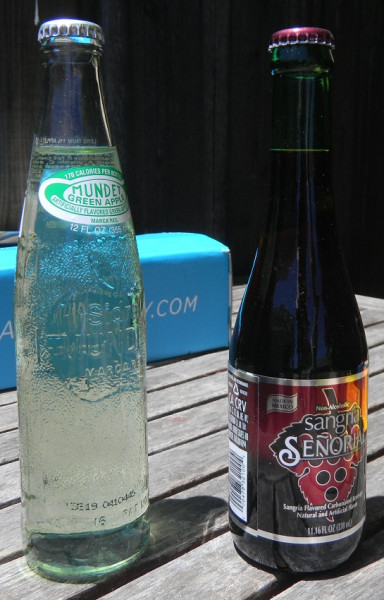 I was a little disappointed in the soda selection, because I've seen both of these brands at the store so they don't seem especially exotic.

MUNDET Greep Apple Soda: A Mexican friend once told me this was a good drink for upset stomachs, an apple-flavored ginger ale alternative.  I always like green apple in candy and Japanese drinks, so I'm sure this soda will be fantastic, too.

SANGRIA SENORIAL Soda: Made with grapes, fruits and spices to create a non-alcoholic Sangria, this soda has a pleasant, complex flavor.  Well, I liked it, at least - my husband described it as "vinegar" after tasting it.  One of the things I like about Mexican soda, generally, is that they don't overcarbonate their drinks like US manufacturers do.  Escape Monthly lists the combined value of the two sodas at $4.00, which sounds about right since most Mexican sodas average between $1.50 and $2.00 around here. 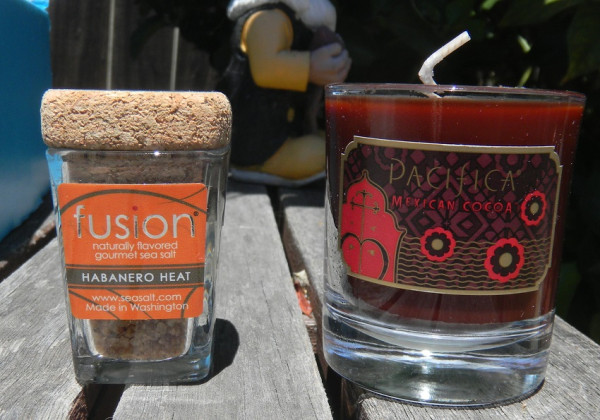 SALTWORKS FUSION Habanero Heat Sea Salt: This isn't an authentically Mexican item; this flavored salt mimics a flavor from Mexican cuisine but is manufactured in Washington.  In the Hawaii box, Escape Monthly included a red sea salt that came from this same company.  I'm not a fan of habanero peppers so this will probably be given away. $5.50

PACIFICA Mexican Cocoa Candle: I was hoping for actual Mexican chocolate, but I suppose this 3 oz candle will do.  It doesn't have a strong cocoa scent, but the vague spiciness does remind me of Mexican hot chocolate mixes I've had in the past.  Pacifica's usually such a great perfumer that the missing chocolate note is really disappointing. $6.00. KOPALI Organic Dried Mango: I love dried mangoes, and this brand seems to be especially flavorful.  The price seems rather high for one tiny bag, though, so I don't know if I'd actually get around to buying these over the ones I already get from Trader Joe's. $4.79.

Assorted Mexican Candies:  Mexican candy is weird.  I've always thought so.  I remember other kids buying these little plastic bottles of flavored Mexican sugar at the ice cream man's truck after school, and I'd think, "Why would you get that when you could be eating ice cream???"  Tamarind Pulparindo sounds gross - and the mascot looks like a little round poo.  I'll probably try it, though, just so I can say that I did.  I've seen de la Rosa marzipan before, too, but I can't remember if I've actually eaten it. $4.00 for the lot, which seems high but I'll just trust Escape Monthly on this one.

I feel like Escape Monthly was really freakin' lazy with this box.  I'm pretty sure every single item can be gotten at Whole Foods, with the possible exception of the sodas - but those are carried at Wal-Mart, at all places, so none of these items are truly unique or special.  All of the items have low price points.  If you paid the full price for a box, you barely break even on this collection.  I'm quite disappointed.

Next month, Escape Monthly's theme is...California!  Huh.  My home state.  Oddly, I'm pleased with this, because I'm curious to see how they'll represent the diversity and general awesomeness of California.  I really hope they don't phone the next box in as they did with Mexico.

Escape Monthly is a vacation-themed subscription box. Each month, one subscriber is randomly chosen to "win" a trip to the themed location! The subscription rate is $49.95 a month, but if you use the coupon code "YOURESCAPE" your subscription will be 20% off each month. If you want to know more or wish to subscribe, please consider using my referral link: http://mbsy.co/hjDG 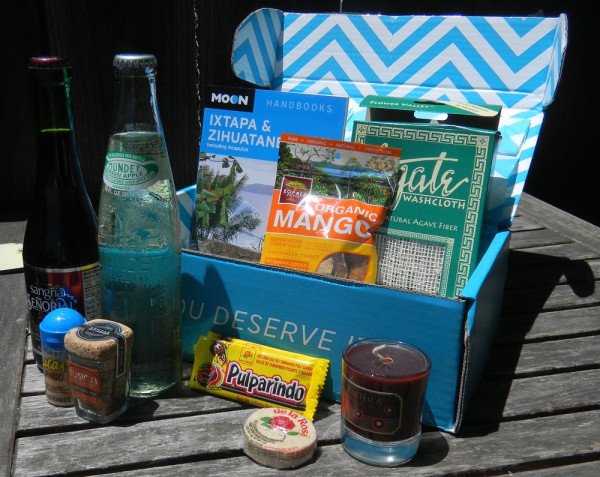