Tonight, Seanie and I were lucky enough to be invited to a free screening of Maleficent, courtesy of Disney Infinity's PR team.  I'll be talking about the movie in a separate post, because I want to take a few minutes to discuss the announcements made about Disney Infinity 2.0.

If you aren't familiar with Disney Infinity, here's the quick version: using small figurines, players become Disney and Pixar characters that can interact with each other.  There is a story mode, in which characters complete adventures in their own world, and the Toybox, which is basically a free-for-all setting where players can create their own world and mix tools and characters from across the various Disney/Pixar worlds.  So Woody from Toy Story and Jack from Pirates of the Caribbean can race each other via Jetpack around popular landmarks of Disneyland, for example.  The coolest feature of Toybox is the worlds created by fellow players - I've seen recreations of the Indiana Jones ride from Adventureland and special Olympics-themed challenges, just to name a few.  It's a very creative and collaborative project.

Last month, Disney announced that Disney Infinity 2.0 would be launched in Fall 2014, and a major new property would be added: the Marvel Superheroes.  Captain America, Thor, Black Widow, and other characters would be available to play in new worlds and in the Toybox.  It was a very exciting announcement.  As fans of the franchise watched videos of the new characters, they noticed familiar-looking Disney characters lurking in the background. 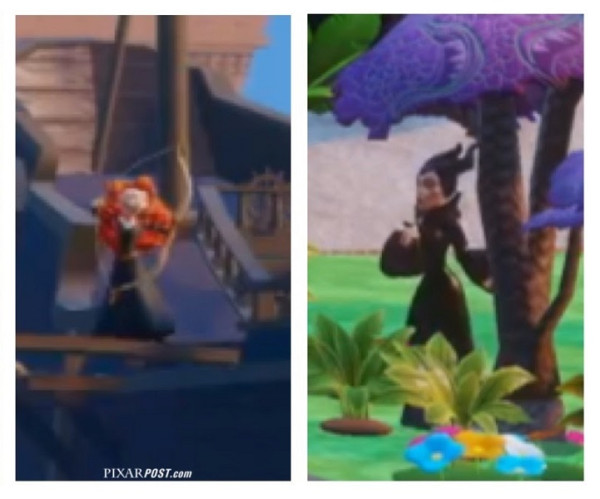 Disney Infinity Executive Producer John Vignocchi confirmed tonight that two of these "strong women" would be available in DI 2.0: Merida from Brave and Maleficent as she is portrayed in the new movie.  New clips showing these two characters were played on the screen, and I have to say they both look FANTASTIC!  Merida's design is incredibly cute, with big blue eyes and bouncy red curls.  Maleficent looks very regal and her character promises to be very powerful, with cool green-flame magic.  Unfortunately, I don't have any official images to post yet, but a new video will go live on Youtube tomorrow featuring Merida and Maleficent in a epic showdown.

At the end of the evening, we were given a limited edition poster created specifically for this event.  It showcases the evolution of Maleficent's toy figure from concept art to the final form.  Each poster is signed by the artist, which is cool.  Sorry my picture isn't better - it was difficult to get a decent picture with the poor lighting in my house. 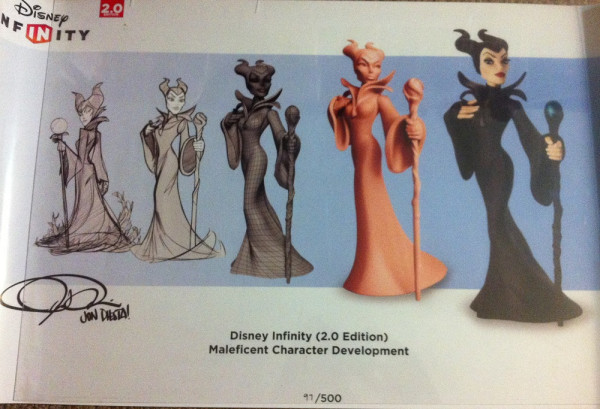 I was already excited for the new Disney Infinity set, but seeing these two characters in action really makes me want to play the game more.  Since launch date is still several months off, I guess Seanie and I will have to make do with beating the playsets we already have.  (We've only beaten the Pirates game; everything else is still incomplete.)
Collapse