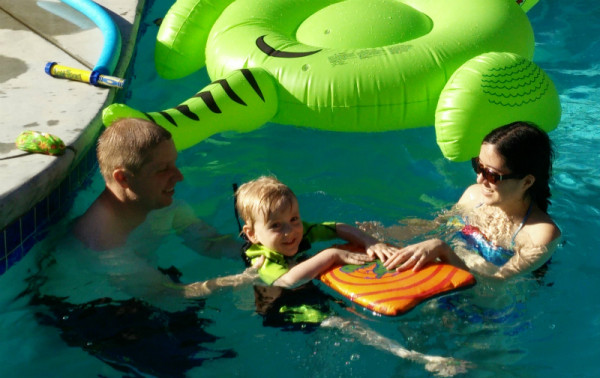 On Sunday afternoon, Seanie's parents hosted a birthday party for their grand nephew Lyle, who was visiting his grandparents and wanted to splash about in the pool.  He's a distant relation and we rarely see him, since he lives in Colorado with his parents, but we were told that our nephews would also be there and it's been a while since I've seen Mom and Papa Buckley, so we decided to swing by.

Seanie refused to put sunscreen on before we left, and I had to chase him all over the house nagging like an old fishwife before he finally put some on.  But he didn't get a nasty sunburn for once, so that was good.  He turns red like a lobster when he burns.

When we first arrived, the grand nephew was showing off by jumping into the water off of a rickety old wooden chair.  I watched him out of the corner of my eye (Lyle constantly demanded attention) while chatting with Seanie's mom.  Seanie had soon ripped his shirt off and was splashing about in the water, but I didn't feel like changing so I just dipped my toes in the side of the pool.  Unfortunately, when you have a three year old, an eight year old, and a thirty year old splashing each other with water guns, spectators become collateral damage, and I was forced into my swim suit when my regular clothes became completely soaked.  Seanie yelled at the grand nephew for that one, reminding the kid that you don't shoot people with your super soaker if they aren't playing the game with you.  The lesson didn't take, so eventually I slipped into the water to avoid getting splashed.

Arlo and Liam, who are now three and a half, have mixed feelings about the pool.  Arlo was totally into it, happily jumping off the side of the pool over and over again into the waiting arms of his father or any other convenient adult.  Liam was more reluctant.  He spent the first hour or two crying because he didn't want to get wet, and then once he was in the water he refused to do anything but cling to his father's neck like a little monkey in a banana tree.  Even in his little wetsuit, he was too cold or too scared to do much.  Eventually, we got him to warm up just enough that he would cling to his little kickboard and float on his back, but it was serious work!  Meanwhile, his little brother Arlo had mastered the water gun and was happily shooting at his uncle Sean and cousin Lyle and his father Terry, too.  They're such opposites sometimes.

There was a big floating green dinosaur, and for a while I was floating around on top of it so I wouldn't get too wet, but small children kept climbing on to join me and, unwilling to float wherever the dinosaur drifted, they demanded to be pushed in different directions so eventually I slipped off and let them have at it.  The dinosaur still had a tendency to drift, so it seemed like we were constantly pushing it out of the way.  At one point, I absentmindedly pushed the float because it was brushing against my shoulder, unaware that Lyle was trying to climb on at the opposite end.  The dinosaur flipped and he was tossed into the water, which was the funniest thing I'd seen all day and I couldn't stop laughing and laughing.  Eventually someone got around to checking the kid and he was fine.

So it was a fun afternoon.  Seanie and I had some errands to take care of, so we left before dinner (and before birthday cupcakes, which was a true tragedy!) but like a proper mother Mom sent us home with a Tupperware container full of homemade mac 'n' cheese and a basket of blueberries.  Yum!
Collapse