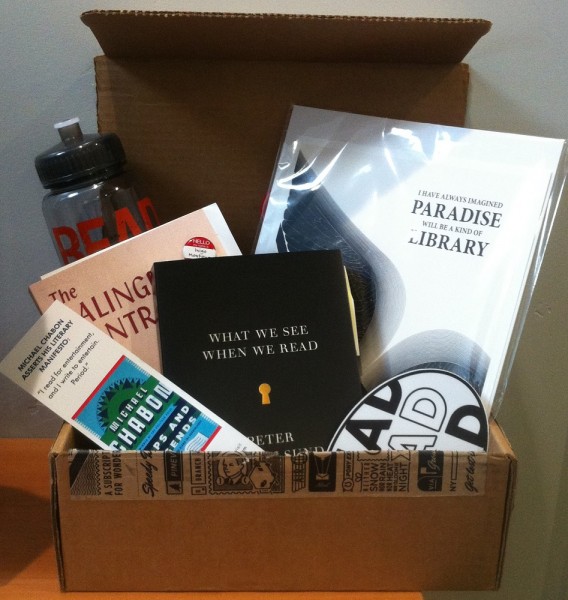 "What, exactly, happens when we read?  It's kind of magical, isn't it?  Words on a page bring whole worlds to life in our minds, letters combined into words and sentences become pictures in our imaginations, and stories about people we've never met and places we've never been shape the way we see reality.  This dispatch is about that magic."
It's hard to believe that three months have already flown by since my last Book Riot box, but here we are in September with a fresh new box on the porch.  Wow.  I haven't even cracked open one of the three books from June.  Mental note: do that!  But for now, let's explore the magic of words on a page with September's Book Riot Box. 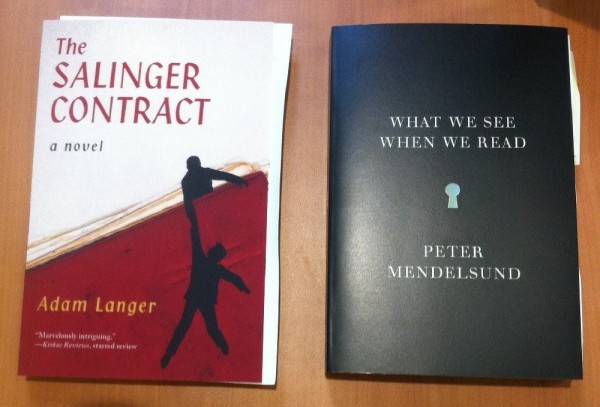 THE SALINGER CONTRACT: A NOVEL BY ADAM LANGER
An enthralling literary mystery that connects some of the world’s most famous authors—from Norman Mailer and Truman Capote to B. Traven and J. D. Salinger—to a sinister collector in Chicago
Adam Langer, the narrator of this deft and wide-ranging novel by the author of the same name, tells the intertwining tales of two writers navigating a plot neither one of them could have ever imagined. There may be no other escape than to write their way out of it.
Adam is a writer and stay-at-home dad in Bloomington, Indiana, drawn into an uneasy friendship with the charismatic and bestselling thriller author Conner Joyce. Conner is having trouble writing his next book, and when a menacing stranger approaches him with an odd—and lucrative—proposal, events quickly begin to spiral out of control.
A novel of literary crimes and misdemeanors, The Salinger Contract will delight anyone who loves a fast-paced story told with humor, wit, and intrigue.

This novel sounds like it could be a lot of fun - it's jumping straight to the top of the "to be read" pile.  Inside the book is a photocopy of a typed note from the author that has been corrected by hand, pointing to the dual nature of a novel where the author and the character have the same name, but are not the same person.  (The first parallel that comes to mind is Stephen Colbert the performer vs Stephen Colbert the character.)
$16.99


WHAT WE SEE WHEN WE READ BY PETER MENDELSUND
A gorgeously unique, fully illustrated exploration into the phenomenology of reading—how we visualize images from reading works of literature, from one of our very best book jacket designers, himself a passionate reader.
What do we see when we read? Did Tolstoy really describe Anna Karenina? Did Melville ever really tell us what, exactly, Ishmael looked like? The collection of fragmented images on a page—a graceful ear there, a stray curl, a hat positioned just so—and other clues and signifiers helps us to create an image of a character. But in fact our sense that we know a character intimately has little to do with our ability to concretely picture our beloved—or reviled—literary figures. In this remarkable work of nonfiction, Knopf's Associate Art Director Peter Mendelsund combines his profession, as an award-winning designer; his first career, as a classically trained pianist; and his first love, literature—he considers himself first and foremost as a reader—into what is sure to be one of the most provocative and unusual investigations into how we understand the act of reading.

Not only does the book itself sound intriguing, but the book has been heavily annotated with post-it notes by the author.  When I see offerings like this, I always feel sorry for the poor intern at Book Riot who had to cut out the photocopied post-it notes and painstakingly make sure they're applied to the correct page in every copy of the book that gets mailed out.  But I also get really excited because it's these unique touches that keep me subscribed.
$16.95 I HAVE ALWAYS IMAGINED... LITERARY QUOTE PRINT
This 8"x10" print, created exclusively for Book Riot subscibers by Obvious State fuses a literary quote with bold graphic art.  Seeing the book with wings makes me think of some of the magical books in the Hogwarts library, flapping around like birds, but I appreciate the sentiment expressed by Borges all the same.  I shall have to hang this somewhere once I get a frame for it.
$18.00? (I'm guestimating a value - Obvious State doesn't list prints of this size on their website, but 13" x 19" costs $24.00.) 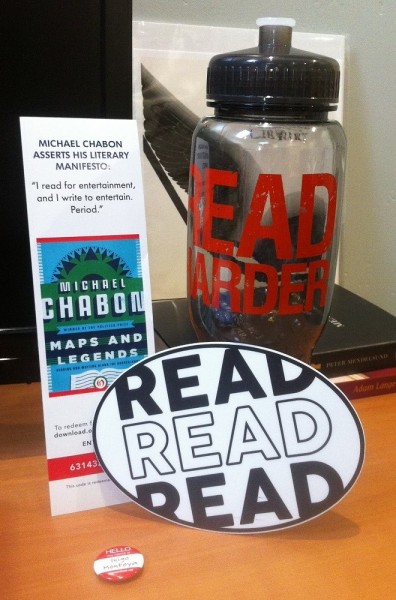 READ HARDER WATER BOTTLE
Weird, I just got a bookish water bottle from Powell's last month.  I guess it's a trend?  I'm a bit torn on the water bottle's design, which I'm realizing as I type that you can't see very well in the photo.  The bottom tapers down to a smaller diameter so that this will fit in your car's cupholder, but this means the bottle is very top-heavy.  Maybe when it's full of liquid this isn't a problem, but if I so much as breathe on the empty bottle it topples over.  The "Read Harder" slogan is some sort of campaign from Book Riot - I've seen t-shirts before - but I don't know the details of it.  Maybe they just want to make books sound more hardcore.
$5.00 - $7.00? (Just guessing since I don't know who makes the water bottle.)

READ READ READ STICKER
Vinyl sticker.
Wants you to read more.
I did just get a new Chromebook a few months ago; I think that will be this sticker's new home.
$1.00-$2.00 (Just guessing.)

MAPS AND LEGENDS: READING AND WRITING ALONG THE BORDERLANDS BY MICHAEL CHABON
At first, I thought that the item on the left was just another bookmark, but it's got a discount code for a free ebook by Michael Chabon.  Now, as you know I'm not an ebook reader, but my husband is - and as a bonus, he is a fan of Michael Chabon.  So I handed the ebook voucher to him to figure out.
$7.69 on Amazon Kindle 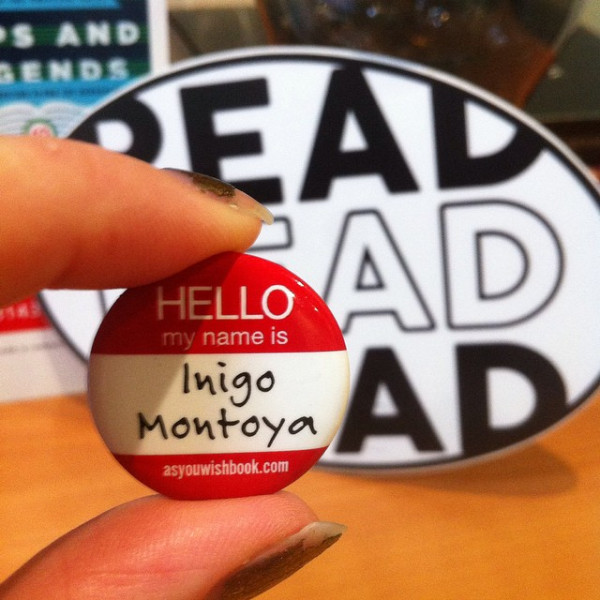 PRINCESS BRIDE BUTTON
Let me tell you one of my dirty little secrets...I'm not a big fan of The Princess Bride movie.  It's not that I hate it, I just LOVED the original book and the screen version didn't do it justice.  The novel is just so freakin' funny!  Anyway.  I do believe that Mandy Patinkin did a darn good job as Inigo Montoya, and who can forget this iconic line?
The button was made as part of a promotion for the upcoming book As You Wish: Inconceivable Tales From the Making of The Princess Bride which is being written by Cary Elwes (Westley himself!) and Joe Layden, a ghost writer who has helped a lot of different people with their memoirs.  Even though the movie isn't one of my favorites, I'm fascinated by the process of turning a beloved book into a now classic film, so I'm sure I'll read it.
$1.00?

One lucky winner randomly received a Lumio book lamp in their Quarterly box.  Not me, unfortunately.  About 20% of the box's subscribers received a third book in their box, but again I wasn't one of those with a bonus.  That's OK, since I still haven't read the books from the previous box I really don't need an extra one!


Quarterly Co. is a subscription box service company that partners with celebrities to "curate" boxes, usually themed around food or fashion or cool gadgets, which are mailed out four times a year. For their book-themed box, Quarterly partnered with Book Riot. At $50.00 per quarter, the box isn't the cheapest subscription box service out there, but the curators promise that the retail value of the items you receive will be more than the cost.
Collapse