The Walt Disney Family Museum had a Haunted Mansion-inspired event tonight. After all, what Disney creation embodies the Halloween spirit quite like Disneyland's haunted house?

Jeans, my co-worker Nicki, and I got to the museum about fifteen minutes before the event started, so as we waited in line we scanned the food trucks for dinner options. They were disappointing. There was an Indian food truck, which was a bit messy to try to eat standing up, and a stand serving Mexican quesadillas and tacos. Neither option looked appealing. I was surprised, because at past 'Animate Your Night' events there have been more choices. I thought for sure there'd be someone doing basic burgers and hot dogs! Instead, we crossed our fingers and hoped there'd be snacks inside.

The first thing we did when we got inside was get our picture taken in front of a Mansion-esque background. Unfortunately, I blinked. You'd think that the museum's photographer, who was using an iPad to take the pictures, would have taken a few seconds to check and make sure the picture turned out well, especially since there wasn't much of a line yet. But she didn't, and as a result I have unfortunately ruined this photo: 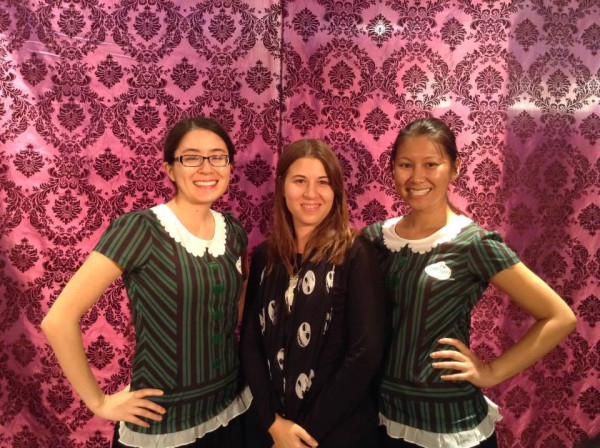 While Jeans and Nicki had waited in the photo line, I had bolted over to the main museum lobby to grab tickets for a 'ghost host' tour of the galleries. As we waited for our tour to start, we grabbed Halloween candy off of little cocktail tables. Jeans even managed to snag some bags of popcorn from somewhere. 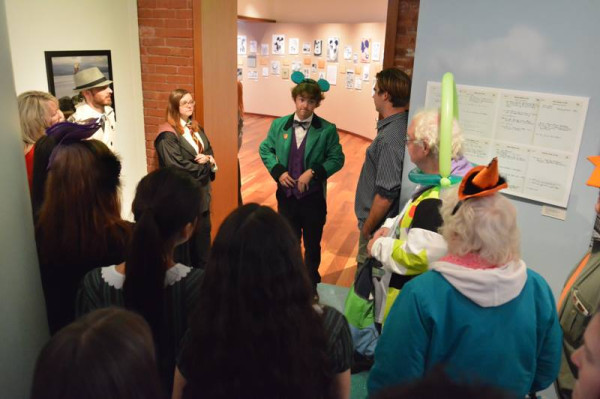 Oh, look!  It's the back of my head.  I'd recognize that hair anywhere.

The tour was very silly. Our “ghost host” - no doubt an intern paying his dues – wore a pair of Haunted Mansion mouse ears and a costume similar to the outfits worn by Haunted Mansion ride operators. With his gingery locks, he looked more like a leprechaun than a dead spirit, but his tour was a very tongue-in-cheek, pun-filled walkthrough of the gallery. He spent no more than a minute in each room, just long enough to rattle off a joke or two (usually a riff on the Mansion's Ghost Host narration) and point out one of the main artifacts in the room.

Also scattered about in the galleries were other characters from the Mansion. In one room, a ghost bride sought to find a new husband after her previous lovers lost their heads. In another, a terrified caretaker could barely speak because he was so shaken, but I guess his mind snapped because he suddenly morphed into the Mad Hatter from Disney's Alice in Wonderland cartoon. It was a dead-on impression, but it was weird. In the final room, three hitchhiking ghosts threatened to follow museum guests home. The costumes were great, and they really added a theatrical flair to the tour. 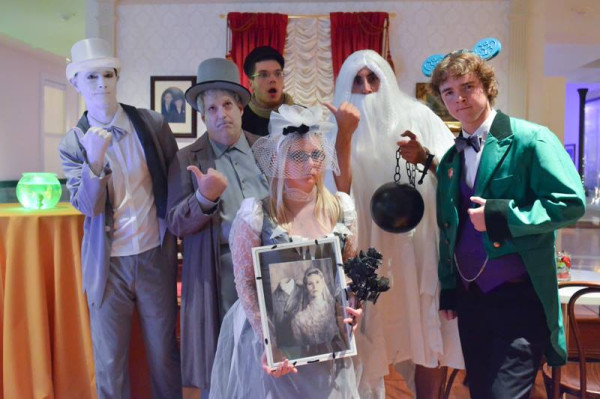 Those museum interns really got into the 'spirit' of things.
Just kidding.  I doubt the museum has this many interns; they're probably regular staff. 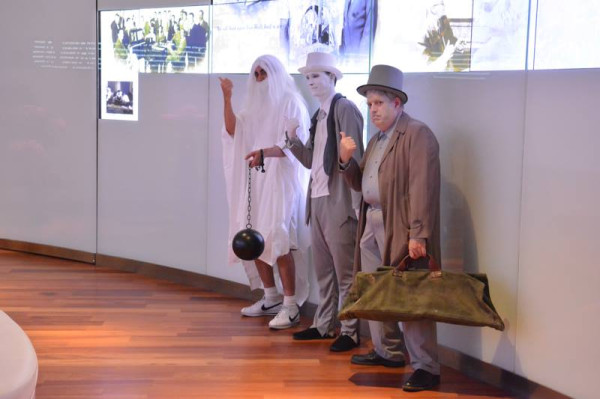 The ghosts that follow you home.  Note the spectral Nikes.

Since Nicki had never been to the museum before, after the end of the guided tour we went back through again, at a slower pace so we could actually look at the exhibits. As always, the diorama of Disneyland enthralled us. It's a dream Disneyland, filled with rides that are no longer in the parks side by side with today's hottest attractions. The model is a work of art that we always stop to appreciate when we visit.

Jeans and I were also ridiculously excited to learn that the Museum had added an animatronic tiki bird that visitors can control. It's really difficult to make the Tiki Room birds move in a lifelike manner! I have a lot more respect for the Imagineers who programmed those birds than I did before.

After we had gone through the galleries a second time, we poked around in the gift shop and grabbed another handful of candy. Then we slipped into the movie theater on the bottom floor and watched cartoons. The museum had a selection of old Disney cartoons that had spooky or Halloween themes playing on a loop, and we must have watched for about thirty or forty minutes. Although many of the cartoon shorts are easy to find on Youtube now, it was really fun to see them on the big screen.

When the reel ended we thought it was time to go, but there was a band playing the main lobby so we went to watch them. It was pretty phenomenal. Each member of the group (The Sea Dogs, regulars on the local Renn Faire circuit) was dressed as one of the Haunted Mansion ghosts: several characters from Mansion;s portrait gallery, the Bride, the Hatbox Ghost, and a Caretaker. The songs they sang tended to be either Disney villain songs (“Never Smile at a Crocodile”, “Cruella de Vil”) or Halloween standards (“Witch Doctor”). As a grand finale, they of course sang “Grim Grinning Ghosts”, the theme song of the Haunted Mansion. 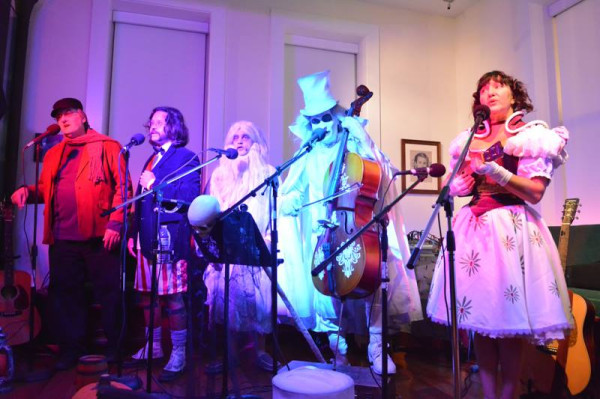 We didn't even have a chance to do all the activities. Downstairs, there's a art/craft studio where people could make little green-screen movies, but we didn't have a chance to try it out. Upstairs there was a bar with special Haunted Mansion cocktails. It was definitely busy, but the crowds were manageable and not as crowded as the last evening event I attended there.

So overall, a really great night. It was obvious that the museum staff were excited about the party and really threw themselves into their various character roles. It made me feel really nostalgic for Disneyland, even though it hasn't been all that long since my last trip.
Collapse