I said that I would write about The Piano, so that’s what I’m going to do today. 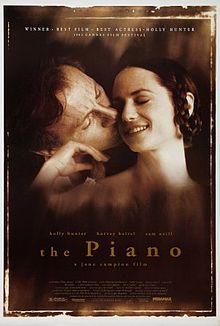 A mute Scottish woman, Ada McGrath (Holly Hunter), is sold to be the wife of a man in New Zealand. She hasn’t spoken since she was six, and communicates through the music of her piano and a sign language understood only by her bastard daughter. When they arrive on the beach of their destination, Ada’s new husband Alistair (Sam O’Neill, star of freakin’ Jurassic Park!) announces she’ll have to leave her beloved piano behind as there’s no room for it in his house. This drives a wedge between the couple, a distance only lengthened when Alistair announces he has sold the piano to his friend Baines (Harvey Keitel). Ada is told she must give Baines music lessons, which she does only to be reunited with her beloved instrument. It soon becomes clear that Baines has no interest in music, only in Ada, so they strike a bargain: she can earn her piano back if he can do “things he likes” while she plays, like touch her skin and take off her clothes and whatnot. When it becomes clear that Ada has no affection for him, Baines ends the lessons. But Ada can’t forget his attention and thinks of him instead of her husband, with whom relations remain frosty.

This film has won buckets of awards, and frankly I am baffled why. It has an ethereal beauty, I grant you, but the story is so dull and predictable that it took every ounce of willpower I possess just to finish it.

First, I find Ada utterly unlikable. I understand that it totally sucks to be sold by your parents to a man you’ve never met and forced to move halfway around the world, I really do. I also realize how traumatizing it is to have this man force you to give up your passion – music – and abandon your instrument/voice to the elements. But the fact that she never once makes the slightest effort to make her marriage work is really frustrating. I mean, Alistair is trying to be a good husband. He’s giving her a comfortable, if not luxurious, home. He takes in her bastard with no complaint and makes an effort to please the child, enough so that the girl is soon calling him father. True, he doesn’t really understand her, but she doesn’t ever seem to open up to him, either.

I get that the piano is Ada’s voice and that separating her from it is like a totally monstrous thing, but again, if you don’t make an effort to explain this to him then how can he know??? All she had to do was write an eloquent letter and I’m sure he would have relented. Instead, Ada flies at him, wildly waving hands about, and Alistair just feels confused and concerned that he may have just brought a madwoman to the shores of New Zealand.

HOWEVER, when a man buys her piano so he can set it up and watch her play it under the pretense of music lessons, she gets over it rather quickly. Baines’ seduction of her while she plays is incredibly creepy to me. A man who demands she play music in her underwear or wants to touch her while she plays…um, eeew! But no, because Baines is a noble soul who has forsaken the love of Maori women even though he otherwise embraces their culture, going so far as to have Maori tattoos on his face, Ada must naturally fall for his rough-hewn ways.

After deciding that she does love Baines, Ada throws herself into his arms and hanky panky in Baines’ shed. Alistair finds out, and reacts rather badly, but after boarding Ada up in their home for a few days agrees to trust her instead of holding her prisoner. She immediately goes scrambling back to Baines in the worst way possible – by scrawling a love note on a piano key after Baines has already established that he CANNOT READ. Then Ada’s daughter, told to bring the message to Baines, promptly gives the key to her adopted father because she, unlike her mother, has bought into this whole new family situation. Alistair freaks out and chops off her finger so she can no longer play the piano.

Again, I know it’s terrible, but Ada had annoyed me so much by this point that I was hoping Alistair would keep chopping with his ax so she could bleed out and die and the movie would end.

Instead, she survives, and somehow communicates telepathically that Alistair that he must let her leave him to be with Baines, and he’s so freaked out that he agrees. (Actually, I think it’s a sign that he’s a decent person finally understanding that he’s in the way of true love, because the only other person that Ada successfully spoke to with her mind was the father of her child.) Baines loads up the piano and the women on a boat and sails away, only to nearly lose Ada when the piano is thrown overboard and she follows it into the ocean. Again, I was excited because if Ada’s dead, the movie is surely over! Instead she’s rescued and I had to sit through a sappy epilogue.

So yeah, critics love this movie and I don’t know why. Sure, Hunter’s an impressive actress who tells the story of her character without uttering a syllable, and the film is pretty to look at. But it’s so heavy-handed with the symbolism of the piano as Ada’s voice! And the characters so creepy and aloof and…well, inhuman that I just can’t see any appeal.
Collapse