So the bookstore has been puttering along quite nicely.  It's been rather quiet the last few months, as the pre-Christmas frenzy settled into a post-holiday lull.  While the slow transactions aren't good for the financial end of the business, the down time has given me a chance to work on some of the big projects I wanted to implement.

One item on my list of proposed improvements was modernizing the store newsletter and bringing it up to the 21st century.  The 2014 newsletter model was this:
1. Create a Microsoft Word document announcing upcoming events.  This document was very picture and white space heavy, as you can see: 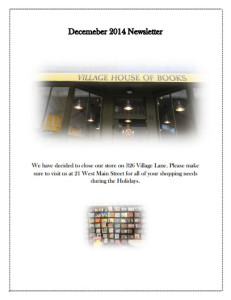 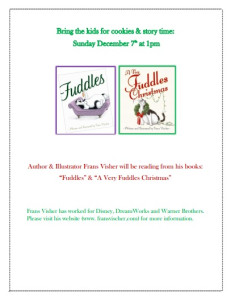 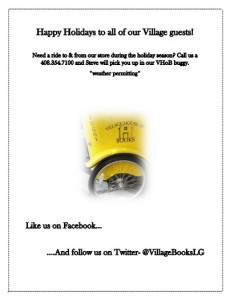 2. Export the .doc to a .pdf.
3. Go into the store's Yahoo e-mail account and manually input the e-mail addresses in batches of 50, attach the .pdf, and send.

It was a nightmare.  E-mails were lost or dropped all the time - I received December's newsletter but not January or February - and the fact that people had to download the file probably meant that a large number of our customers weren't even seeing the content.  But we had no way to know.

So for the March newsletter I begged my boss to PRETTY PRETTY PLEASE sign up for a professional e-mail service.  I showed her one that we use at my other job.  It has newsletter templates we can use (no more of this white space business!) and after the newsletter is sent, it tracks who opens the e-mail, who clicks links included in it, and the addresses that bounce or unsubscribe.

WOW.  SO FULL OF LOVE FOR USEFUL DATA.

So working with the coworker who originally was assigned to do the newsletter, we created a new account and got to work.  This is what we ended up with: 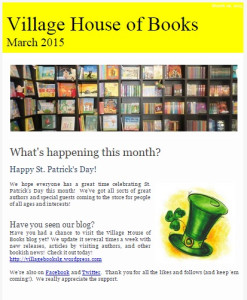 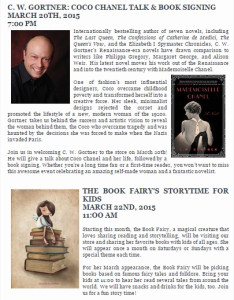 Keep in mind that this is a scrolling e-mail, so the "page" cut-off was pretty arbitrary, but doesn't it look better?  A little more professional?  I mean, I'm not calling it award-winning design or anything but it's a lot closer to the industry standard shown by the newsletters of other local bookstores.  My coworker says it's much too text heavy, but I think that if we want to interest our customers in our events, we have to tell them something about it.  We'll probably be experimenting with the format in the next few months.

The feedback from the e-mail tracking has been really interesting, though.  About a third of our customers have looked at the newsletter since it was published this morning.  Again, I don't know what it was before but I'm inclined to think that's a huge improvement, since I also suspect the number of people who actually received the e-mail went up significantly from previous mailings.  I hope that by the end of tomorrow will be up to at least 50%, but I know that I only read a fraction of the things that land in my inbox and I'm sure it's no different for our customers.
Collapse