Every Chinese New Years, we go to a restaurant in Mountain View called Kirin.  Once the family assembles, Mom orders one of the restaurant's banquet menus, which usually consists of a soup, a chicken dish, a seafood dish, a whole fish, a beef dish, something with pork, and rice.  There's often a vegetable dish of some sort, and there's usually one or two seasonal goodies.  This year, for example, we got crab and peking duck.  It's always a bit of a crapshoot, because Mom doesn't read Chinese, so while we have a general idea of what the menu will be there's an occasional surprise.

At least, that's what I think is going on.  Every meal seems to involve a waiter pointing at a list of handwritten Chinese words and Mom smiling and agreeing that yes, that's what she wants to order.  After the waiter leaves, she gives the rest of us a look that clearly says, Well, I tried, but who knows what we're getting.

At the end of every meal, the family eagerly anticipates dessert.  This is not one of those Chinese restaurants that hands out fortune cookies or starlight peppermint candies at the end of the meal.  Oh no.  Kirin gives out ethnic desserts.  We have no way of knowing what the dessert will be, although I think it's seasonal, but there are a couple of variations we've come to expect:
- almond jelly in sweet coconut milk
- mango pudding in tapioca
- egg pudding
- Chinese fruit salad, which is delicious but I can't identify half of what I'm eating

However, the most controversial of all Chinese desserts is the red bean soup, which almost always shows up at New Year's.  I assume it's because red is a lucky color, and therefore eating red beans will bring prosperity and good fortune in the following year, but I might be making that up.  Anyway, it looks like this: 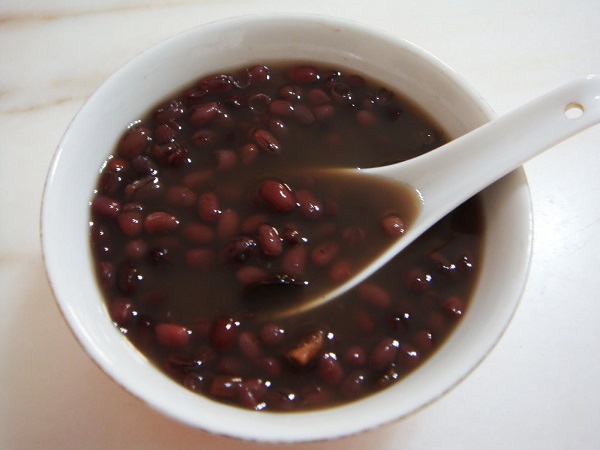 When I was a kid, I thought this was the grossest dessert imaginable, and I refused to touch it.  At some point, though, my taste buds grew up, and now I love the flavor of red beans.  I'm excited to eat a bowl of this at the end of the meal.  I save room for the red bean soup.

My husband does not agree.  He thinks it's disgusting.  Without the power of my grandmother's disapproval (Popo did not like it when food was wasted) I can't force him to eat more than one or two token bites.  His is the most extreme reaction of the family.  Mom eats it out of a sense of duty; I think my dad genuinely likes it.  My brother's pretty neutral on it.  My mom's friend Cheryl hates it; her husband Bill scrapes every last drop from his bowl.  My uncle would like it better if the little bean skins weren't in there, throwing off the texture.

So every year, there are always two or three unclaimed bowls of red bean soup sitting in the middle of the banquet table, and every year I wish that we got those bowls at the start of the meal so I could fill up on red beans instead of wasting valuable stomach real estate on pork ribs.