I don't know what prompted the Disney company to mine its animation catalog for stories that the live action film division can adapt, but previous movies like Alice in Wonderland and Maleficent at least attempted to tell the story from a new angle. Cinderella, the latest reincarnation of a Disney classic, does not. It is a nearly direct translation from drawing to live acting as you can get, and the few changes aren't always an improvement. 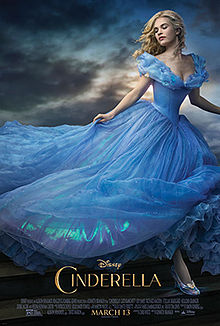 Spoilers ahoy. (Although are they really spoilers when the story is Cinderella?)

Ella has an idyllic childhood with two doting parents, cruelly shattered when her mother falls ill and dies. Eventually, her father remarries, but his new wife, the Lady Tremaine, has barely arrived before he leaves for a long business trip. While he's gone, he dies, leaving Ella orphaned and at the mercy of her stepmother. She is quickly reduced to the role of a servant as the family fortunes rapidly decline. One day, while hiding from her crushing duties in the forest, Ella meets a handsome young man named Kit. The seeds of love are sown, and when a royal ball is announced she plans to attend in hopes of meeting her friend, whom she believes to be an apprentice working in the palace. However, Kit is not a mere apprentice, but the crown prince, and his ailing father wishes to see him married before he dies. If he cannot find the nameless maiden from the forest, he will have to marry for political advantage. Lady Tremaine, meanwhile, will stop at nothing to gain the hand of the prince for one of her own daughters.

I am not a particular fan of 1950 Cinderella, so I initially welcomed the opportunity for a remake. But I was disappointed with this new version. In the original movie, one of my favorite plot threads is the King's obsession with grandchildren. It was funny when I was a kid, and now that I'm an adult with a father who never stops reminding me that he's ripe to be a grandfather, it makes me laugh even harder. In the new movie, forget about it. The king is dying from a disease, just like every other loving parent in the film, so the prince has to get married to protect the kingdom. What a way to suck the fun out of the story.

One of the common criticisms of the Cinderella story is that she and the prince meet at the ball and dance for a few hours, which provides enough of a romance to end the tale with a wedding. Disney attempts to remedy this by having Ella encounter the Prince in the woods early in the story. They have a ten minute chat about being kind to animals, and then they meet at the ball and dance for a few hours and fall in love. It's an improvement, but not much of one. They still hardly know each other. It's hard to applaud this improvement when 1998's Ever After did such a good job with establishing the relationship between Cinderella (named Danielle in that movie and played by Drew Barrymore) and the Prince. They've shared adventures and actually have a relationship from which a deep passion could form. Prince Kit's and Ella's two encounters give their love the strength and durability of any teenage lust-fueled relationship. They're Romeo and Juliet sans tragic ending.

But at least Kit is an improvement over his animated counterpart. Kit finds a woman to love and convinces his father to throw the ball so that he can contrive to introduce them. He disguises himself as a member of the Duke's entourage to find Ella instead of waiting at the palace for his servants to find his future wife. He had enough personality and charm for the audience to love him even before Disney killed off his father and made Kit into yet another tragic orphan.

Cinderella is as bland and forgettable as a Disney princess can be. She's pretty, nice, and good – and that's about it. Her character in the new movie gets very little additional development. When she was young, her mother told her to be kind and be brave, which in her adult life translates to act as a doormat to her step-family. But kindness is ultimately rewarded by a fairy godmother (Helena Bonham Carter as her usual delightfully kooky self) who gets Ella to the ball to see her prince, etc etc.

I always wonder, somewhat cynically, why the fairy godmother doesn't show up a bit sooner and help Ella out before years of being abused by her stepmother. Surely it wouldn't take too much magic to get a lawyer to come over and help Ella claim her inheritance and kick the step-family out? But that's not how the fairy tale goes, so back to the movie.

The costumes are usually stunning; I would kill for Lady Tremaine's wardrobe. It's elegant and stylish and a The fairy godmother dress for Cinderella is a little girl's princess fantasy; it's covered in sparkles and butterflies and would be over-the-top on a Paris runway. (Thankfully, her wedding dress is far more sedate.) Prince Charming's costumes were specifically designed in shades of white and blue and grey to highlight Richard Madden's eyes, an effect that all women watching the film will appreciate. (A pity Disney princes can't be scruffy; Madden's face must have been waxed to remove all traces of his GOT facial hair.) 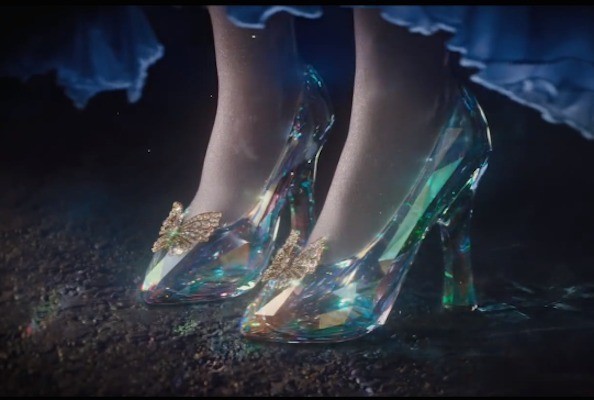 The one major costume failure were the glass slippers. The heel was far too chunky to be attractive and not all the computers in the world could make the prop shoes look remotely wearable. When the fairy godmother claims they are “really comfortable” she is straight up lying. When the shoe's design was first revealed, I was a little horrified by the butterfly that seemed so unnecessary and clunky. It turns out that there is a reason why butterflies are so near and dear to Cinderella's heart, and if I'm being sentimental it is rather sweet to see the motif repeated in her dream slippers.

Like the animated movie, Cinderella talks to mice and other animals. Because she is pure of heart, or kind and courageous, or [insert reason here], they can understand her and communicate with her. The computer animation required to bring the menagerie of critters to life is generally convincing, although there are some green lizards that never quite gain the lifelike qualities of the mice and geese. They shine just a little too brilliantly in the moonlight. Oh well.

It's not a bad adaptation of Cinderella, I suppose, if all you want is a straightforward telling of the same old story. But what's the point of that? If a movie studio decides to tell a story that it has already done, I expect them to bring something new and fresh to the table. This Cinderella utterly fails in that regard. But little girls will love it and buy the merchandise and convince the people at Disney that retreading the same tired ground is a winning formula, and no doubt more of the same will follow. How utterly tragic. 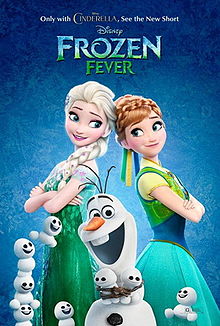 Oh, speaking of retreads, how about that Frozen short at the beginning of the movie? It was cute. Kinda forgettable, if I'm being honest. It's Anna's birthday and Elsa is determined to make it the best day ever to make up for all those years of isolation, but she has a cold. Elsa has a cold, and every time she sneezes little tiny snowmen come to life, and WHY DOESN'T ANYONE IN THE KINGDOM WANT TO EXPLORE THIS ASPECT OF HER POWER??? Never mind her inexplicable ability to create clothing with a wave of her hand, the woman can create life without even thinking about it. That's...that's the power of a god, people. Just think of the story possibilities! But no, let's just have a birthday party. It seems like such a waste.
Collapse