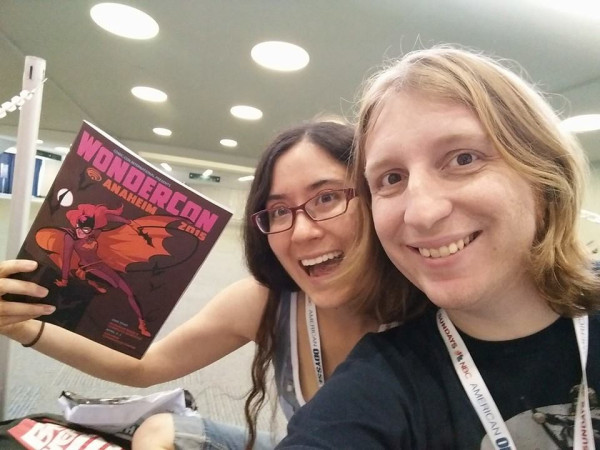 Waiting in line for the Animation Show of Shows
Seanie and I were up bright and early this morning so that we could run around in Disneyland before the con started. We arrived at the park not too long after rope drop and managed to hit most of our favorite rides –Haunted Mansion, Indiana Jones Adventure, Jungle Cruise, and Big Thunder Mountain Railroad – in just over an hour. Then we ran across the street to the Convention Center for Wondercon.

We waited in a line for about fifteen-twenty minutes so that we could pick up our badges, and then got into another line for the dealer’s room. After hanging out there for a spell, we realized that the 15th Annual Animation Show of Shows would be starting at the same time the dealer’s room opened, so we gave up our spot and hightailed it over to the Arena, where we plopped on the floor and killed half an hour texting and taking dumb selfies on our phones.

The Animation Show of Shows is a screening of several animated short films, curated by Ron Diamond. The following shorts were shown:
• Feast by Patrick Osborne
• Bang Bang! by Julien Bisaro
• Marilyn Myller by Mikey Please
• Lava by James Murphy
• Me and My Moulton by Torill Kove
• 365 by Greg and Myles McLeod
• We Can't Live Without Cosmos by Konstantin Bronzit
• Duet by Glen Keane
• Hunger by Petra Zlonoga
• The Bigger Picture by Daisy Jacobs

I’d seen a few of them before. Feast was the short Disney chose to play in front of Big Hero 6, and it won an Academy Award earlier this year. Me and My Moulton was shown at a screening I attended a few months back that was sponsored by the National Film Board of Canada, and Duet was the focus of a Glen Keane talk I saw at the Walt Disney Family Museum. The others were all new. Naturally, I had my favorites (Lava is adorable and I can’t wait for more people to see it when Inside Out hits theaters later this year) but they were all strong films with something special in the animation or the story that set it apart.

After the two hour screening ended, I poked my head into the Drawing Notes: Inside the Music of Animation panel, but most of the questions revolved around getting hired as a musician by the film industry, so I joined my husband at the Secret History of Free Speech in Magazine Comics. Alex Cox of the Comic Book Legal Defense Fund gave a quick history of the development of the Comics Code Authority and how creators began to bypass the Code’s censorship by publishing their work in magazines. Really neat stuff! It made me want to dig up some of those pre-Code comics and see just how gruesome or racy they really are. I bet that by today’s standards they aren’t all that bad.

I felt so inspired, in fact, that our next stop was the dealer’s room. Talk about an overwhelming space. It was three enormous interconnected halls crammed full of booths as far as the eye could see. We dove into the rows at Artists’ Alley and just started moving up and down, looking at prints, postcards, self-published comics, buttons, magnets, plush toys, and t-shirts. Originally, I hoped to start getting an idea of what I might want to buy to take home, but everything quickly began to blur together. There were so many talented people, and far more prints and posters than I could ever hope to fit on my walls. So Seanie and I just relaxed and looked without worrying about trying to buy anything.

Well, with one exception. When we ran into James Silvani, the artist behind the Darkwing Duck comics, we had to stop and buy a graphic novel and get it signed. Seanie loved that show when he was a kid! Silvani was very sweet and gracious, and we chatted with him for a couple of minutes while he drew in Seanie’s book.

But overall, we showed remarkable restraint, considering how many cool things there were for sale, both official merchandise and fan-made creations.

For a while, Seanie and I split up. He was chatting with a Ghostbusters fan group based in our hometown while I shopped, but I ended up getting lost and had trouble getting back to the table where I’d left him. By the time we reunited and made our way to the front, most of the day’s panels were over, so we decided to return to the Disneyland Resort.

When we arrived, giant crowds of high school students on spring break filled the Disneyland gates, so we turned into California Adventure. It was still crowded, but the crowds weren’t crushing like they would have been in the Magic Kingdom. We hopped on a few rides with short lines, then made a beeline for The Cove, a bar overlooking Paradise Pier. After waiting for about twenty minutes, they let us in. Seanie ordered a habanero margarita, which was spicy. I mean SPICY. He could barely tolerate it. Eventually, the bartender noticed his distress and told him he could pick something else, and Sean gratefully swapped it for a nice beer. I ordered an off the menu drink called Mickey’s Fun Wheel, which was colorful and tasted like blue raspberry Jello. It was fine for me, but probably too sweet for most people. We pounded down an enormous plate of lobster nachos – that is, I picked out all the nuggets of lobster meat while Seanie ate the actual nachos.

It wasn’t that late by the time we staggered out of the bar, but the combination of the early morning and anticipation for the business of Saturday at the con led us to head back to our Airbnb rental early for some much-needed shut-eye.
Collapse