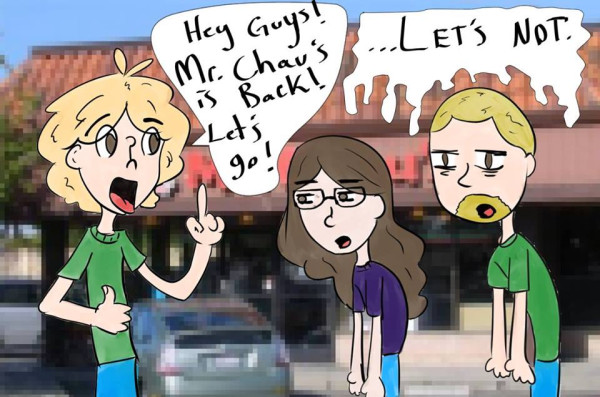 Mr. Chau's was a chain of Chinese fast food restaurants that were all over the South Bay in the 1990s.  The chain had a very distinctive and catchy jingle that, once it buried itself into your brain, could never be forgotten.  Anyone who grew up around here can sing it to you on command.  Once Panda Express came sweeping into town, Mr. Chau's was quickly wiped off the map.

The only remaining location is about a mile down the road from where we live, and Seanie is obsessed with it.  Last time we went, about two years ago, the food was disgusting.  The meat was greasy and old and the soup was essentially oily water.  But Sean peeked in the window the other day and claims they've remodeled.  He really, really wants to go back and give Mr. Chau's another chance.

Yesterday, it was all he would talk about.  His friend Josh came over to hang out, and had to listen to Seanie beg and plead for him to take a chance on Chau's.  Of course Josh refused.  He knows better.  But one of these days, Josh or I will have a moment of weakness, and Seanie will get his way.  He cannot resist the siren song of Mr. Chau's, and he's dead-set on taking us down with him.

There were a dozen variations on the song over the years, with extra verses listing dishes or sharing holiday messages, but this is the only version I could find online.
Collapse