BOOK RIOT SUBSCRIPTION BOX
JUNE 2015
Happy summer, Riot readers!
We come to you in this dispatch with books about technology, the internet, and the future of reading. Whether you prefer to kick it old-school with print books and actual phone conversations or like to read and interact digitally, we hope you'll find something to relate to and something that will challenge you.

But as I look through the box's contents, I have to confess that the biggest challenge is mustering some enthusiasm for the items you've included in this quarter's offering. 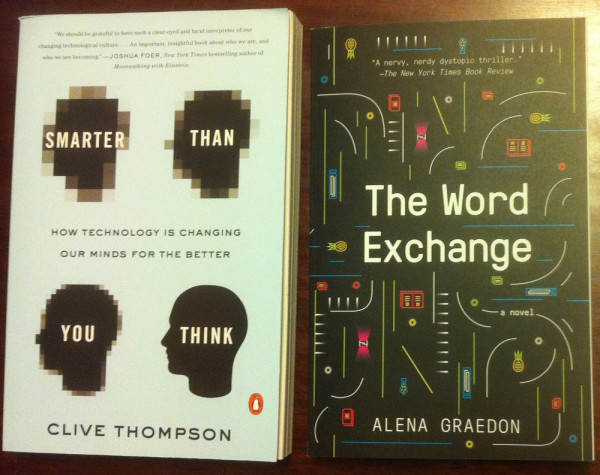 THE WORD EXCHANGE BY ALENA GRAEDON
Books, libraries, and newspapers have at last become things of the past. Now handheld Memes allow for constant communication and entertainment. They can even anticipate our needs, dialing the doctor before we know we’re sick, or prompting us with words we can’t recall. Yet a few dedicated wordsmiths are still laboring on the final print edition of the North American Dictionary of the English Language. But one evening, right before it’s released, Anana Johnson finds that the chief editor—her father—has vanished.

In alternating points of view, Anana and her bookish colleague Bart follow their only clue, the word ALICE, down the proverbial rabbit hole, into subterranean passages, the stacks of the Mercantile Library, and secret meetings of an anti-Meme underground resistance, racing closer to the truth about Anana’s father’s disappearance, and discovering a frightening connection to the growing “word flu” pandemic.


SMARTER THAN YOU THINK BY CLIVE THOMPSON
A revelatory and timely look at how technology boosts our cognitive abilities—making us smarter, more productive, and more creative than ever

It’s undeniable—technology is changing the way we think. But is it for the better? Amid a chorus of doomsayers, Clive Thompson delivers a resounding “yes.” In Smarter Than You Think,Thompson shows that every technological innovation—from the written word to the printing press to the telegraph—has provoked the very same anxieties that plague us today. We panic that life will never be the same, that our attentions are eroding, that culture is being trivialized. But, as in the past, we adapt—learning to use the new and retaining what is good of the old. Smarter Than You Think embraces and extols this transformation, presenting an exciting vision of the present and the future.   $17.00 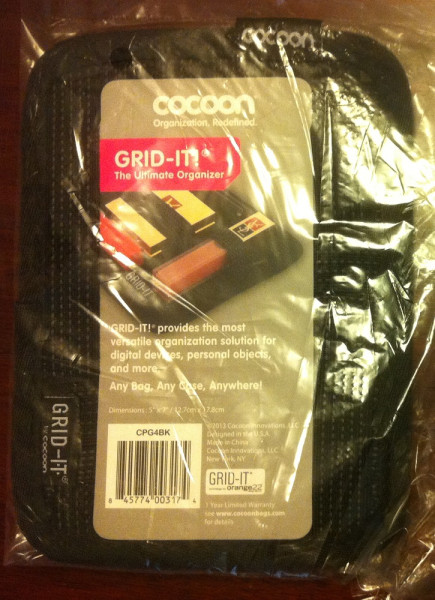 GRID-IT ORGANIZER
So I'm looking at this thing and I have no freakin' clue what the intended use might be for my life. The idea is interesting but the organizer is too small to be used for tablets, notebooks, or even a cell phone.
My husband looked and it and said, “Oh yeah! I've seen people use it to organize chargers.” but since I only carry my phone I don't really need a complex grid for the one charging cable. I don't think it would be preferable to a traditional make-up bag for lipsticks, because if a lid pops off you get lipstick all over your bag instead of just the inside of the make-up container. This seems like a really weird inclusion in a BOOK-themed box. $11.99 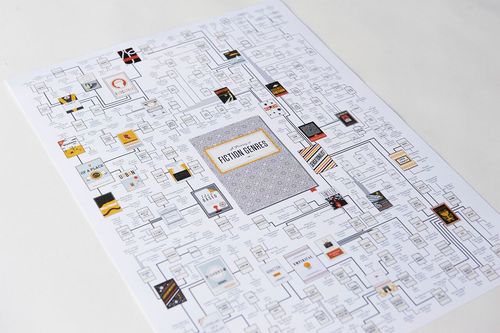 POP CHART LAB LITERARY GENRES MAP
I didn't bother to take the poster out of the tube it shipped in so I'm using the picture of it from Quarterly.co's website. It's hard for me to value a poster, because that's the sort of swag that gets thrown at you for free from publishers all the time when you work at a bookstore. I know there are some people who collect prints, but I'm just not one of them. My walls are too full. $20.00


This box was just so disappointing to me. It's partially an interest mismatch – I'm not especially excitable about technology, so a book that focuses on it as a theme doesn't enthrall me. But it's more than that. The value of each of these bookboxes has declined, I think. The curators are finding less interesting items to include, and the “bookishness” of something like the Grid-It is debatable. I was disappointed with the previous box, too, so after going through this box I went to the Quarterly website and unsubscribed. At $50 a pop, these boxes aren't cheap, and after two duds in a row I don't want to take another chance on the whims of the Book Riot curators.

Quarterly Co. is a subscription box service company that partners with celebrities to "curate" boxes, usually themed around food or fashion or cool gadgets, which are mailed out four times a year. For their book-themed box, Quarterly partnered with Book Riot.
Collapse