Every year, I have been told, HB's throws a big party after the end of the holiday season for its employees. The store owners go all out, reserving a restaurant for the evening and giving gifts. The employees have been talking about it for weeks.

We all assembled at Cafe Stritch in downtown San Jose after the store closed. An entire floor was set aside for us, decorated with paper lanterns and lovely floral arrangements. A giant pile of wrapped presents dominated one end of the room, while on the other a table creaked under the weight of hor d'oeuvre trays. I'd barely stepped in before an employee of the restaurant was asking to fetch a glass of wine.

Our store seems so small that it's easy to forget just how large our staff is. About thirty people mingled in the room. When it was time to sit, we found name cards at the tables. Trying to figure out the hierarchy of the store based on where we were seated was strangely diverting. The store owners were in the middle of the table, of course, and the former store manager sat to their right. I settled into my spot between the store accountant and the manager of our book fairs.

Dinner was fantastic. I was served the most tender lamb chops I've ever had for the main course. I was so stuffed with meat I could barely touch my dessert, even though it was delicious.

After dinner, the store owners sang a little song they'd written about the staff. Each person got a line or two focusing on their contributions to the store in the past year. It was really cute and heartfelt.

Then we played a white elephant gift exchange - except the owners had bought all of the gifts. There were fancy cooking utensils, ceramic pots and vases, and decorative statues for the garden. Nothing had really caught my eye except for an incredibly creepy fox statue. The fox stood on its hind legs and had a ceramic head with a chipped ear. It had been dressed in a big furry coat - not the silky lush fur of mink or rabbit but the sort of stringy fur that's more akin to hair - and leggings and furry Ugg-like boots. It was strange, a bewitched fairy creature. I wouldn't want it in my home but the accountant really wanted it, so I stole it for her. She got me a lovely succulent plant arrangement in exchange. I knew that I'd probably kill the plants within a week of getting them home, because that's the sort of black thumb I have, but they were pretty.

As I was packing up, I noticed that one of the unclaimed gifts was a box with some fancy French-milled soaps. I immediately swapped the plants out. The store owners were surprised. "Don't you want something fancier?" I explained that I have a very small house and I love fancy soaps, so it was definitely the best gift for me, but they seemed to think I was purposely choosing a less exciting present so the employees who had missed the party would have better things to choose from. It's nice that they think I'd be altruistic like that.

Anyway. There was fun and games, pretty speeches thanking everyone for their hard work and dedication. It was a great night, and a wonderful way to close out 2015 and begin the new year together. 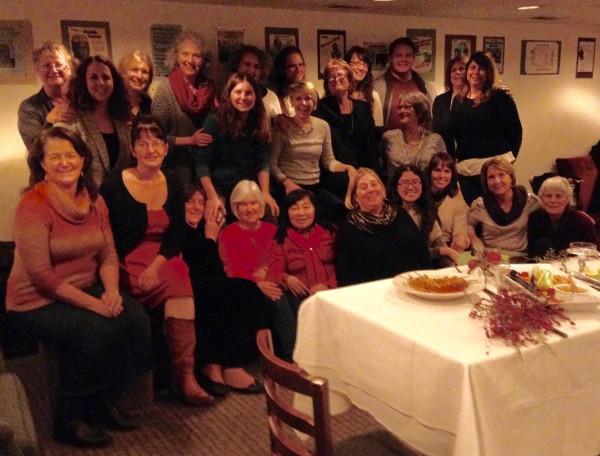 Here's to another year together!
Collapse