There's an artist I support over on Patreon because he is the creator behind the webcomic Mike: Bookseller, which is one of my favorite series.  It's all about the adventures of Mike and his fellow booksellers at a Big Box Bookstore, and it's hilarious.  If you've ever worked retail, it'll make you laugh.

One of the rewards for backing the series on Patreon is the chance to appear as a character in the series.  This week I got lucky and found out I was going to make a special appearance in the comic.  I couldn't wait to see what kind of situation Mike would stick me in. 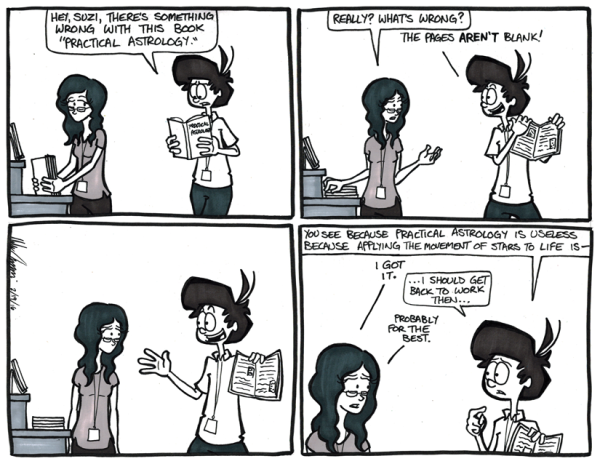 Mostly because when an awkward situation comes up at work, I'm rarely witty enough to come up with a clever reply.  So I just stare until the customer/coworker becomes hyperaware of the awkwardness and moves on.  I knew nothing about the direction Mike would take the character sharing my name, so the fact that she (so far) aligns with her real-life counterpart is just great.

Go read Mike: Bookseller already!  It's a great comic that updates several times a week and is always a lot of fun.
Collapse