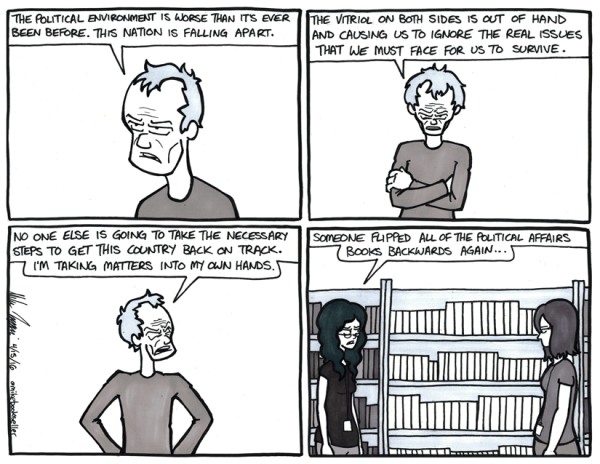 Mike: Bookseller tells it like it is. Unfortunately.
This political season has really brought out the ugliness in others.  Not too long ago, one of my coworkers was screamed at by a man because we didn't have any Republican picture books.  We had children's biographies for Hillary Clinton and President Obama, but not Donald Trump or Ted Cruz.  He was really tearing into her over something totally out of her control.  We can't help that no one has published a children's book about Donald Trump!  If there was one, we would stock it because we believe in being fair and stand against censorship.  That's why we have a biography of Ben Carson for middle grade readers and Trump's adult books for sale (although so far not a single copy has beenn purchased).  But we can't sell a book if it doesn't exist.

More to the point of the strip, we've also  had people flip books around or hide political books behind the titles of their rivals.  It's really obnoxious and doesn't reflect well on either side, so I wish people would mind their manners instead of making extra work for innocent bystanders.
Collapse