Powell's Indiespensable Book Club
Volume 59: Homegoing
Since 2008, Powell's Books of Portland, OR has run a book club/subscription service that sends a new, autographed hardcover book in a custom slipcase to its subscribers. Each mailing is accompanied with notes on the selected book and a surprise selection of extra items. 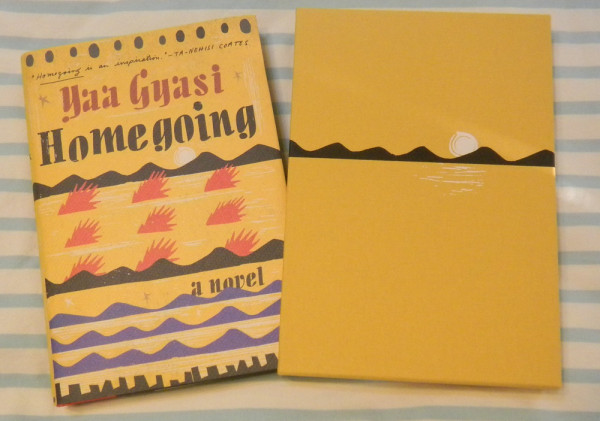 HOMEGOING by Yaa Gyasi
A novel of breathtaking sweep and emotional power that traces three hundred years in Ghana and along the way also becomes a truly great American novel. Extraordinary for its exquisite language, its implacable sorrow, its soaring beauty, and for its monumental portrait of the forces that shape families and nations, Homegoing heralds the arrival of a major new voice in contemporary fiction.
Two half-sisters, Effia and Esi, are born into different villages in eighteenth-century Ghana. Effia is married off to an Englishman and lives in comfort in the palatial rooms of Cape Coast Castle. Unbeknownst to Effia, her sister, Esi, is imprisoned beneath her in the castle’s dungeons, sold with thousands of others into the Gold Coast’s booming slave trade, and shipped off to America, where her children and grandchildren will be raised in slavery. One thread of Homegoing follows Effia’s descendants through centuries of warfare in Ghana, as the Fante and Asante nations wrestle with the slave trade and British colonization. The other thread follows Esi and her children into America. From the plantations of the South to the Civil War and the Great Migration, from the coal mines of Pratt City, Alabama, to the jazz clubs and dope houses of twentieth-century Harlem, right up through the present day, Homegoing makes history visceral, and captures, with singular and stunning immediacy, how the memory of captivity came to be inscribed in the soul of a nation.
Generation after generation, Yaa Gyasi’s magisterial first novel sets the fate of the individual against the obliterating movements of time, delivering unforgettable characters whose lives were shaped by historical forces beyond their control. Homegoing is a tremendous reading experience, not to be missed, by an astonishingly gifted young writer.
I'm really excited about this month's selected book! I don't know much about Homegoing but one of my co-workers has been absolutely RAVING about it for weeks, and her enthusiasm makes me want to drop what I'm currently reading and dive in.

Like all Indiespensable books, Homegoing is signed by the author and comes in a custom slipcase. It's so simple, yet elegant.  I love the way these slipcases look when they're all lined up on my shelves.  A small yellow chapbook is also included with the book that includes an interview with Yaa Gyasi. 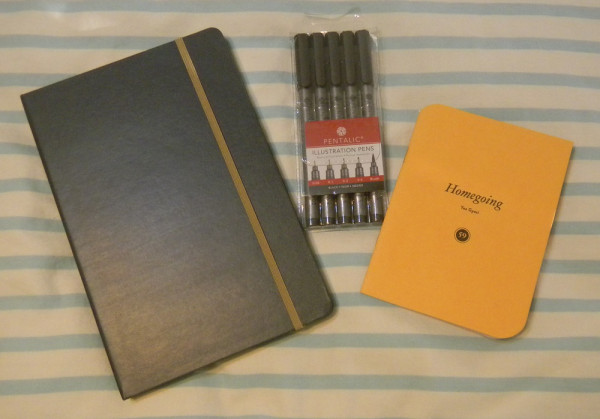 SCRIPTA NOTEBOOK (BLANK PAGES)
This is just the sort of notebook I'm always looking for!  It has unlined blank pages, a pocket on the back cover for miscellaneous bits of paper, an elastic band so the book won't fly open when jostled in a bag, and it's roughly 8" x 6" so it's quite portable.  This is great!

PENTALIC ILLUSTRATION PENS
When I'm not geeking out about notebooks, I can get pretty obsessive about pens.  I'm not a snob, by which I mean I don't have a brand that I'm strictly loyal to, but one of the easiest ways to put a smile on my face is to tell me to go to Office Depot and pick up some new pens for the office.  I'll spend an hour poring over the different features and testing the smoothness of the ink flow.

I think it's so cool that Powell's is encouraging Indiespensable subscribers to express themselves.  Whether this notebook gets used for taking notes on books while you're reading or for making diary entries or observational sketches, it's a fun, bookish thing to include.