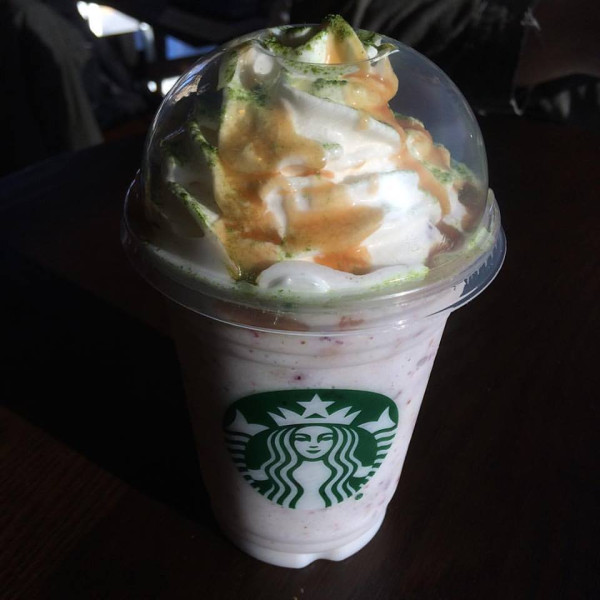 In honor of Ugly Sweater Day (who knew it was a holiday worth mentioning?) Starbucks created a special drink: the Fruitcake Frappuccino.  It's only available this weekend.

Fruitcake itself may date back to Roman times, but our Fruitcake Frappuccino® is a recipe that's fresh and new. We start with a rich, Hazelnut Frappuccino® base, blend it with dried fruit, cinnamon, milk and ice, then finish it with whipped cream, caramel dots and a matcha sprinkle for an updated take on a holiday tradition.

Of course, I had to try it.  I had no idea what to expect, but slap the words "special edition" on a food item and I won't be able to walk away.  When I went in to order the drink, the Starbucks baristas had no idea how to make it.  I could hear them asking each other what ingredients were needed.  In fact, at one point I even heard an employee hiss to her co-worker "DF?  What the heck is DF?  I've never seen that before!"

Eventually someone located the recipe and successfully made the drink.  The Fruitcake Frappuccino is delicious! Sweet and nutty with a lot of bits of fruit mixed in.  Raisins and cranberries, I think, but once they're blended into beverage it's pretty hard to tell.  It was a little hard to drink because the bits of fruit would clog the bottom of the straw, but if they'd had fat straws like the ones used in boba drinks it wouldn't have been a problem.  It was refreshing and pleasantly lighter than anything named "fruitcake" should be.  I'd order it again if it shows up on the menu next year for another Ugly Sweater Day.
Collapse