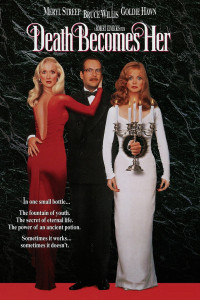 Once upon a time, a friend described a movie that she thought I’d enjoy. It sounded crazy, a story about two vampire women trying to kidnap the one man who can save them from some sort of disease or disorder that renders them unable to heal after injury, so every scratch or scrape remains on their skin forever. If she mentioned the name of her movie, I forgot it almost immediately, but after seeing Death Becomes Her this weekend I think it must have been the film she was trying to remember.
Her description was also wrong on several key points, so I wonder if she fell asleep during a portion of it or only caught half of it.

Two women, formerly best friends, become bitter rivals after Madeline (Meryl Streep) steals the fiancé of Helen (Goldie Hawn). Helen spends years in a psychiatric hospital plotting revenge, as Madeline marries Ernest (Bruce Willis) and settles into an unhappy marriage. As the women grow older, Madeline’s acting career dries up as her looks fade, but Helen becomes a bombshell and rising star author. Determined to outshine her rival once more, Madeline bargains with the beautiful, mysterious Lisle (Isabella Rosellini) for an immortality potion. It restores Madeline’s youth and beauty, but at a price: when Madeline is killed by a fall down the stairs, her life doesn’t end. Like a zombie, her body continues on, unable to heal or recover from the injury. When Helen returns to see Madeline’s body, it’s revealed that she, too, has drunk the magic potion. Knowing their dead bodies will be in constant need of maintenance, they conspire to kidnap and control one of the most talented mortician they know: Madeline’s husband, Ernest.

Death Becomes Her has the same delightfully campy, macabre humor as films like Little Shop of Horrors. It’s so much fun to watch. The offbeat story is entertaining as heck and utterly weird. What really sells the story is how good it looks; the special effects are top notch for a movie produced in the early 90s. A mix of practical effects and computer-aided illusions completely sell the bizarre concept. It’s no wonder the film won the Oscar that year for Best Visual Effects; it earned that award.

Looking back from twenty-five years later, I also appreciate the costumes and make-up so much. Madeline Ashton wears some of the iconic fashion looks from the time: giant hair tied up with an enormous scrunchie, black catsuits under semi-sheer drapes of fabric, and always tight dresses and blouses with a plunging sweetheart neckline. Goldie Hawn’s dead blue eyes are so unsettling, especially against that flaming orange hair and blood red lips. If my friend happened to tune into the movie as Helen climbs out of the pond, water dripping everywhere, I can see how the idea that she was a vampire took root. I also love the theatrical, Egyptomania clothes worn by Lisle. The timeline doesn’t quite work to place her at the height of her beauty during the 1920s, but she certainly looks like a displaced flapper. In another version of the script, she was meant to be Cleopatra herself...I rather like that interpretation of the character. 71 seems a trifle too young for Lisle to amass the fortune and beautiful people with which she surrounds herself.

Also, is that really Bruce Willis? I’m so used to seeing him play action-oriented roles, like in Pulp Fiction and Die Hard and Looper. It’s weird to see him as a henpecked beaten down little man...but it’s also super fun. He did good.

I’m so glad Donna suggested we watch this movie. It’s just the sort of thing I love, and it’s really unfortunate that I wasn’t exposed to it sooner. My old friend certainly tried; if only she’d gotten a few more details right this would probably be a household staple every October.

Also: I really think that Jeans, Seanie, I should dress up as Madeline, Ernest, and Helen for Halloween sometime.
Collapse