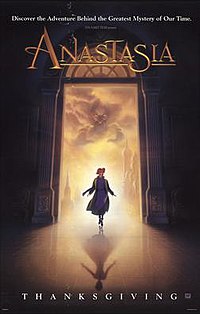 This is a movie that I somehow never managed to see during my childhood. I was beginning junior high when it first came out, so I was just a little too old for animated movies to still be “cool”. Besides, everyone knew that it was just a Disney knockoff. Who needs to see that when you can watch an actual Disney movie?

But over the years, a lot of my friends have expressed shock or dismay when I admit that I’ve never seen the film, so I finally watched it thanks to the power of Netflix. Honestly, I don’t see what the fuss is all about. It’s an OK movie, but that’s all – just OK. It’s hardly the swoonworthy Russian fairy tale that everyone made it out to be.

I’m not panning it simply because of the extreme liberties it takes with history. Obviously, if I’m a fan of Disney movies I’ve learned to live with that. The Russian marketing department of Anastasia described it as “a fairy tale set against the background of real Russian events” and that’s a fair description. It works for me. But for the record, Anastasia’s dead, folks. Sorry.

As you know, I’m all about the villains when I watch a fairy tale, and in this case Rasputin fails to deliver. I mean, historical Rasputin was a freaky freaky guy but this weird zombie Rasputin was utterly disappointing. His minions are little bug-creatures that straddle the awkward line between cute and creepy, and they sing the chorus for his big song, “In the Dark of the Night” – and how can anyone take a villain serious when the following lyrics appear in his big, dramatic number?

I can feel that my powers are slowly returning!
Tie my sash and a dash of cologne for that smell!
Cologne? REALLY??

Add the trauma of an obnoxious bat sidekick (Bartok the Magnificent my ass) and the fact that bits of Rasputin are constantly falling off, and you get a villain that just isn’t scary.

The songs are more or less forgettable. “Once Upon a December” is pretty, but the rest of them? Meh. It’s been a few weeks since I watched the movie and I can’t remember the lyrics or tune, save for Rasputin’s bizarre demand for perfume. Animation’s decent, but sometimes Dimitri’s face looked a little weird. Maybe that’s just me…

But anyway, I don’t know why people are so fond of this movie. Maybe it’s one of those things you have to have seen as a kid to love…