I suspect that subscription boxes could easily become a new addiction, since they combine my love of getting surprises in the mail with all sorts of nifty themed packages.  I thought I would dip my toe in the water, so to speak, and try out a subscription service, so I signed up for Ipsy, since $10 is a small enough amount that won't feel horrible if I don't like a bag's contents. (I wrote about my first glam bag here.)

The second subscription box that I signed up for is Graze, which sends healthy snacks out in weekly, bi-weekly or monthly intervals.  Each box costs $5, and comes with four little packages of food.  As you start ranking the snacks based on your preferences - 'love', 'like' or 'trash' - the site's algorithm will start tailoring each box to your tastes.   I thought it would be perfect for work - since I only work full eight-hour days on weekends, a Graze box every other week lets me have one snack per full shift.  $5 is basically what I would spend on a Starbucks drink, so if I cut back on two of those a month then the Graze box won't be an extra expense - not really.  (Although my husband would say I ought to work on reducing my snacking spending anyway.)

So last weekend, my first Graze box arrived.  The box is quite small - thin enough to fit through our mail slot.  Each food package was a single serving, but even though the servings didn't look too big in my hand, they were quite satisfactory.  The random selection chosen by Graze for my inaugural box included: 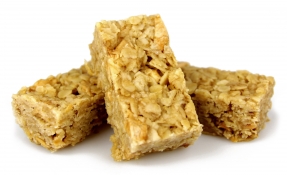 Apple & Cinnamon Flapjacks
Apparently, in the UK a 'flapjack' is not a pancake, like it is here in the United States, but rather it is something like a granola bar.  The Apple & Cinnamon Flapjacks - three bars lined up neatly like little soldiers in the plastic tray - were softer than granola bars, with a nice subtle cinnamon flavor and sweet - but not artificial! - apple flavor.  I really liked them, so I marked them as 'like'.  (I would have chosen 'love' but I want to get as much variety as possible, and if you select 'love' the item will be sent frequently instead of occasionally.)

Dark Rocky Road
This trail mix contained pecans, dried cranberries and dark chocolate pieces.  I didn't like it as a snack because it isn't a mindless "grab 'n' go" mix.  To maximize the flavor, you had to have pretty much equal parts of nut, fruit and chocolate in each mouthful - and then it was a delicious mix of sweet flavors.  But if you just got a pecan and some cranberries, with no chocolate...well, it had an unpleasant dry mouth feel and the tartness of the berries overpowered the pecan.    Too much fuss and bother, so I labeled this one 'trash'. 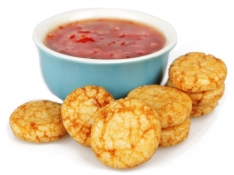 My Thai
Remember when you were a kid and your mom gave you handisnacks to eat at school?  Well, mine did, anyway.  The My Thai package contained a small section of hot chili sauce and several 'soy bites' to dip into it.  It was delicious.  I mean, the sauce is that sweet and spicy plum sauce that you always get in Thai restaurants - slightly hot, but mostly just sweet.  Add in something crunchy to dip, and well - I'm sold.  I marked this one 'like', and it was my favorite snack in this week's box. 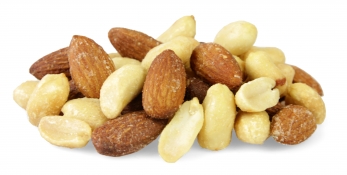 Salt 'n' Vinegar Peanuts and Almonds
My mom always loved Salt 'n' Vinegar potato chips growing up, but I never cared for them.  Transferring that flavor pairing to nuts wasn't much better than the chips.  Even Seanie, who actually likes Salt 'n' Vinegar chips, didn't care for these.  Definite 'trash'.

Only one snack really struck out, and even then it wasn't so bad.  It will be interesting to see what other flavors will appear in upcoming boxes.
Tags: food, graze, snacks, subscription boxes
Subscribe