It seems like I was just opening up my first Ipsy bag, but nearly a month has flown by and the April bag has just arrived. 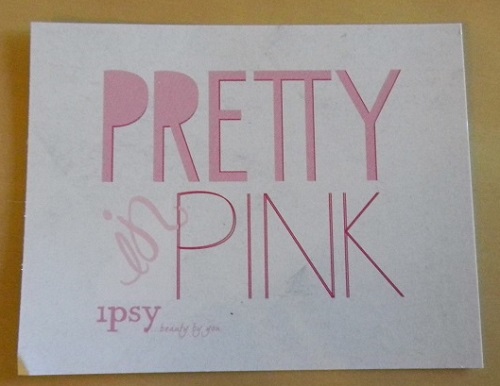 The theme, quite naturally, is Pretty in Pink, so what can I expect?  Pink cosmetics, to be sure.  Maybe a blush?  Almost certainly a nail polish.  A pink lipstick or lip gloss.  Maybe - just maybe - some sort of pink scarf, although I don't know how on earth they'd fit that into the bag with the other products.  Or maybe I'm thinking too much about the color pink - maybe there will be some sort of flowery perfume, or something sickly sweet along the lines of Pink Sugar.  There are just too many possibilities for me to guess. 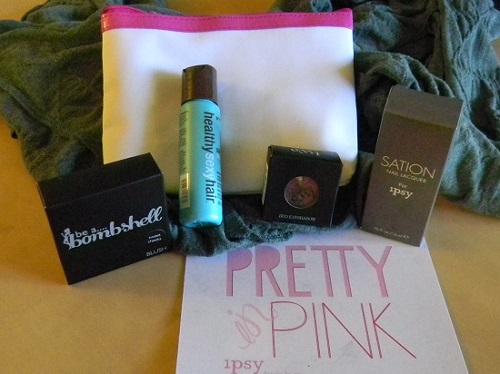 There are four products in the bag, which is a plain white one with a pink vinyl band across the top.  It's very simple, very clean - definitely a suggestion of spring.  It's not nearly as cute as last month's nautical-themed bag, though.

The bag is dominated by cosmetics this month - which I had rather guessed from the theme, but there were a few surprises.

Moving from left to right, the first box was Be a Bombshell's "Sweet Cheeks" blush.  It's a pale pink with a hint of shimmer, and retails for $16.00 on the company's website.  I'm unfamiliar with the company, but my Nars "Orgasm" blush is nearly used up so this arrived at an opportune time.

Healthy Sexy Hair's contribution to the bag is next -  a Soy Nourishing Renewal Styling treatment containing argan oil, the "it" ingredient of the moment.  It's supposed to tame frizzy hair, so it is definitely something I'm interested in.  Plus, the full-sized bottle is $21.95 at Ulta, which I would be hesitant to pay - so I'm glad to have a small bottle to try before buying!

I didn't think that pink eyeshadow would be included, because I've personally found pink to be a difficult color to wear on the eyes. Two Cosmetics' "Heartache" duo eyeshadow may tempt me to try pink one more time, but I don't know.  I've never heard of this company, and on their website is a disclaimer about discontinued products containing non-FDA approved pigments.  That's not exactly confidence inspiring.  The shadow retails for $6.99, although it's currently discounted to $5.75 on Two Cosmetics' website.

The last item is a Sation Nail Lacquer in "Of Corset I'll Call You".  The box says "for Ipsy" on it  - does this mean it is an exclusive color?  That would be impressive, but further research revealed that the color is part of Sation's new, limited edition Marie Antoinette line.  If I had to describe it, I'd call the color a hair paler than Barbie pink.  Rose petal pink, perhaps?  It's definitely a springtime shade - my toenails might give this a test run later tonight.  The polish is listed as $5 on Sation's website. 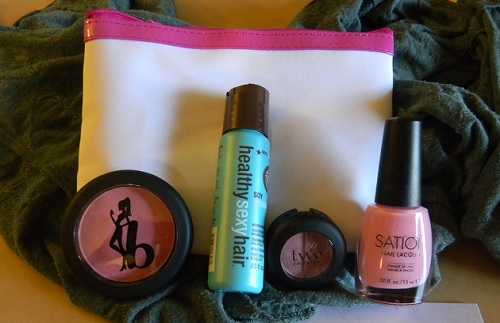 Open boxes so you can see the colors.

So, if dollar amounts are important to you, this $10 bag netted about $30 in products.  That's not a bad deal at all!  The trade-off is that two of the brands, Two Cosmetics and Be a Bombshell are virtual unknowns, and the cosmetics are made in China, which always makes me a little nervous.  By contrast, the two better known brands from the bag, Sexy Hair and Sation, are manufactured in the United States.

But hey, I found the contents of the bag to be a big improvement over March!  Way to go, Ipsy!
Tags: cosmetics, ipsy, subscription boxes
Subscribe