Not much to say except that if I was smart, I'd go through Graze.com's selections and block anything with chocolate until the weather cools down.  Nothing was liquefied or anything in this shipment, but after that heat wave earlier this month and the "feathered" look of the chocolate pieces in one of my snacks, it might be a wise precaution. 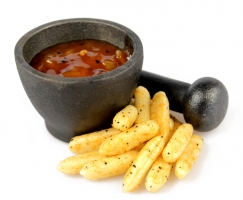 Fruity Mango Chutney
fruity mango chutney with black pepper dippers
The dipper sauces are starting to all taste the same to me.  That's probably bad.  The mango chutney was tangy and sweet, and the combination with the crunchy dipper sticks had a nice texture.  There was waaaaay too much pepper on the dipper sticks, though, and it ended up dominating the flavor.
Verdict: TRASH

After Dinner Mint
mint infused raisins, blanched almonds and dark chocolate buttons
Yup, this is the one with the chocolate.  It raised other questions, too.  Why minty raisins?  Wouldn't minty chocolate be better?  Although, I suppose that if the mint flavor wasn't being carried by the raisins, it would be hard to justify their presence.   If the idea of the mix is "after dinner mint" then raisins aren't a natural inclusion.  As it was, the mix was a little weird.  It didn't taste bad, just...puzzling.
Verdict: TRASH

Bounty Hunter
milk chocolate drops, coconut flakes and cranberries
The chocolate in this mix seemed unscathed by the heat, which I found interesting because I would assume that milk chocolate has a lower melting point than dark chocolate.  Shows what I know, I guess!  I like cranberries, I like coconut, and I like milk chocolate.  Put 'em together and it's a winning combination!
Verdict: LIKE
Tags: food, graze, snacks, subscription boxes
Subscribe