IT'S HERE! IT'S DONE! MY EXHIBIT HAS BEEN INSTALLED! 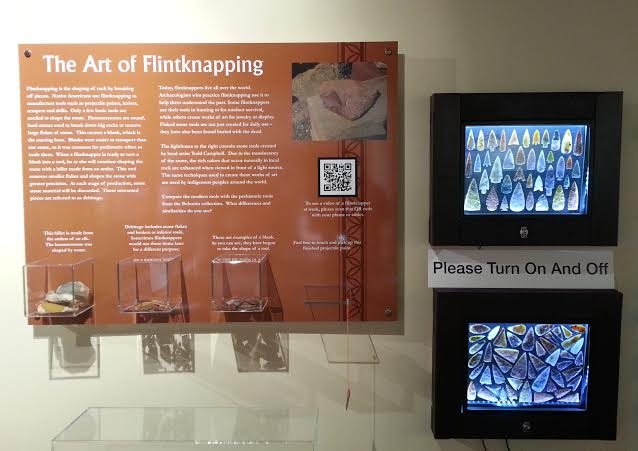 My flintknapping exhibit at the Anasazi State Park Museum has been installed.  I'm so excited and happy that it is finally completed.

I was really worried about how the sign would look, since I couldn't see it in person during the fabrication process and we ran into some technical problems during the design process because I didn't have image-editing software capable of producing vector graphics.  I think it turned out pretty well, though.  It does a pretty fair job of matching the signage that was already in the museum in font, color, and layout.

The three enclosed plexiglass boxes contain artifacts excavated from the site, so that people can see the prehistoric work of the Anasazi.  The final box was replaced with an open platform which has an arrowhead attached to it, so that curious visitors can actually handle a knapped piece of stone.  (Interactive exhibits FTW!)  It was created by the same artist who made the various points and blanks in the two lightboxes, and we invite the visitors to turn the lights off and on so they can better appreciate the color and translucency of the stone.  It's pretty freakin' cool.

Beneath the sign is another plexiglass case which contains many knapped pieces from the Behunin collection.  This was a donation to the museum by a local family who had picked up a wide range of beautiful arrowheads, spearpoints, and other stone tools.  Most of them are lacking provenance, so it can't be said exactly how old the tools are, but they're almost certainly prehistoric pieces.
Since I know it's impossible to read the tiny words on the sign, here's the text, written by yours truly:

"Flintknapping is the shaping of rock by breaking off pieces. Native Americans use flintknapping to manufacture tools such as projectile points, knives, scrapers and drills. Only a few basic tools are needed to shape the stone. Hammerstones are round, hard stones used to break down big rocks or remove large flakes of stone. This creates a blank, which is the starting base. Blanks were easier to transport than raw stone, so it was common for prehistoric tribes to trade them. When a flintknapper is ready to turn a blank into a tool, he or she will continue shaping the stone with a billet made from an antler. This tool removes smaller flakes and shapes the stone with greater precision. At each stage of production, some stone material will be discarded. These unwanted pieces are referred to as debitage.

Today, flintknappers live all over the world. Archaeologists who practice flintknapping use it to help them understand the past. Some flintknappers use their tools in hunting or for outdoor survival, while others create works of art for jewelry or display. Flaked stone tools are not just created for daily use – they have also been found buried with the dead.

The lightboxes to the right contain stone tools created by local artist Todd Campbell. Due to the translucency of the stone, the rich colors that occur naturally in local rock are enhanced when viewed in front of a light source. The same techniques used to create these works of art are used by indigenous peoples around the world.

Compare the modern tools with the prehistoric tools from the Behunin collection. What differences and similarities do you see?"

Another cool bonus is the video that accompanies this exhibit.  There wasn't a way to mount a TV screen or a computer monitor onto the wall - and that would have blown the budget, which I had already gone over when fabricating the sign - but if visitors scan the QR code with their smartphones or tablets, it takes them to this video on Youtube:
I'm really looking forward to getting feedback over the summer as to whether people take the time to access the video while in the museum, and if kids are having fun with the arrowheads.
Tags: anasazi state park, anasazi state park museum, internship, museum
Subscribe