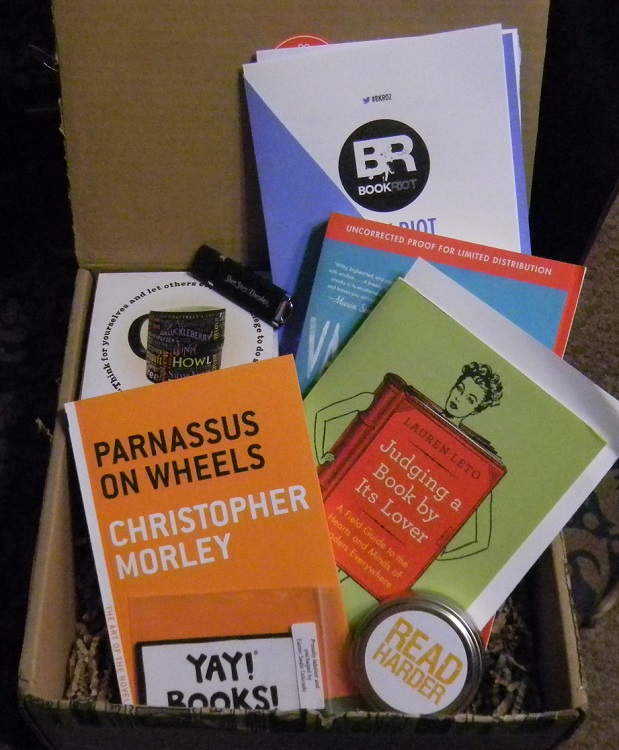 Book Riot Book Box: March 2014
"Our theme is The Reading Life.  Being a reader is about loving books, but it's also about a lot more than books."
Quarterly Co. is a subscription box service company that partners with celebrities to "curate" boxes, usually themed around food or fashion or cool gadgets, which are mailed out four times a year.  In late 2013, Quarterly partnered with Book Riot to create a new, book-themed box.  I missed signing up for the first box by a hair (I was typing my shipping information in when the last subscription sold out) but after hanging out on the waitlist for a month or so, I was finally allowed to hand over my money and join the subscriber ranks.  At $50.00 per quarter, the box isn't the cheapest subscription box service out there, but I just can't resist receiving surprise packages in the mail.

The neat thing about Book Riot is that it isn't just a new book every three months - although that would certainly be an awesome surprise package, too!  These are packages for book lovers, filled with things that let you show off your love of literature or just may help you read a little better.  Each box comes with a letter explaining the selections and why a particular item was included.

So what was in the box? 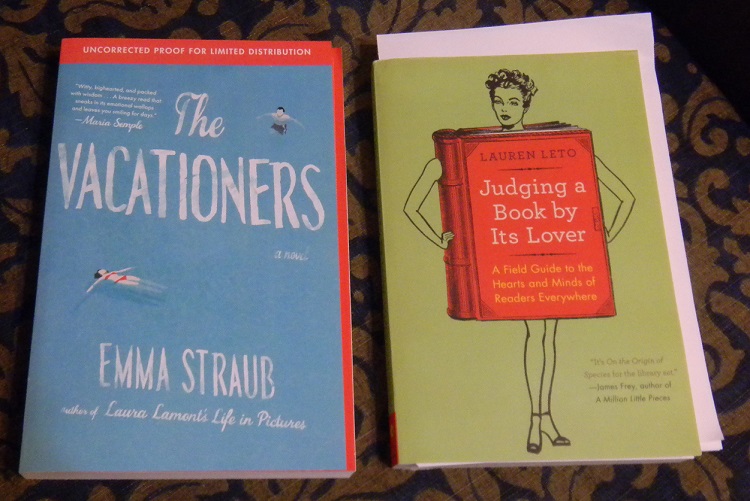 The Vacationers by Emma Straub (Advance Reader's Copy): Some boxes had an advance reader's copy of an upcoming book thrown in.  Possible titles included The Storied Life of A. J. Fikry, The Vacationers, Delancey: A Man, a Woman, a Restaurant, a Marriage, Gemini, and The Steady Running of the Hour.  As you can see, I got a copy of The Vacationers, which Amazon.com describes as "an irresistible, deftly observed novel about the secrets, joys, and jealousies that rise to the surface over the course of an American family’s two-week stay in Mallorca."

Judging a Book by Its Lover by Lauren Leto: "There are no right books or wrong books to read, and no right or wrong way to read them.  If you're into it, we're into it.  So is Lauren Leto, and she's written a fantastic collection of essays and personal stories built on these beliefs."  I haven't had a chance to do much beyond flip through the book quickly, but I can already see that this will be fun for book lovers.  I'm already looking forward to the section "How to Fake It", which offers quick summaries of famous books from authors like Ayn Rand, John Updike, and Haruki Murakami as well as interesting or funny factoids about each author.  As part of Book Riot's extra content, Lauren Leto added a few extra "Fake It" authors - that's what those sheets of paper sticking out of the edges of the book are. $14.99. 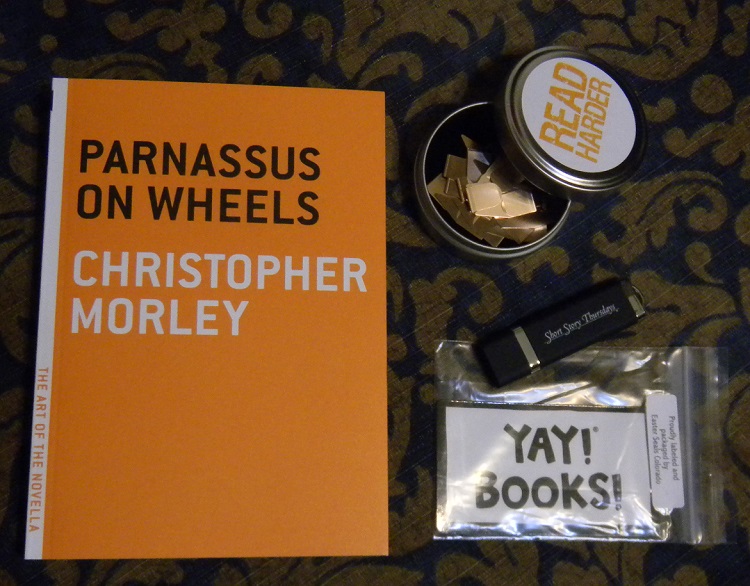 Parnassus on Wheels by Christopher Morley: "When you sell a man a book, you don't sell him just twelve ounces of paper and ink and glue - you sell him a whole new life."  I was really excited to see this book in the box.  Several years ago, I read another book of Morley's called The Haunted Bookshop, and I loved it.  Not for the plot, which was actually quite dreadful, but for the protagonist's effervescent love of books. Bookshop is an exceptionally quotable book when you're trying to describe the exact qualities that make a physical book so darn lovable, and I've heard that Parnassus on Wheels is superior in almost every way. $10.00.

Book Darts:  "Okay, so you want to mark your place or remember that amazing quote for later, but you don't want to write in your book.  We've got you covered." These little bronze points are going to be so darn useful!  I am forever marking my books up with bits of paper for my reviews, only to have them fall out before I finish the story.  There are also times when I go back to a tagged page and realize I have no idea what it is that I found remarkable about it.  The book dart not only marks the page, but it can mark the exact sentence that caught my attention - and it does it all without being obtrusive or leaving permanent marks.  Awesome!   This is the sort of discovery I love subscription boxes for - I never would have found these without Book Riot. $6.69.

Short Story Thursdays Digital Dispatch USB Drive: "Meet one of the coolest literary Internet communities you haven't heard of!  Jacob Tomsky wants to send you a short story each week, and he wants you to read it, and that's basically all he wants.  Tomsky's Short Story Thursday emails (he prefers to call them dispatches) are personal, profane, and prpfoundly delightful."  The USB drive contains a video from Tomsky describing his project, why it began, and how he selected the stories included on the drive.  The short stories are not written by Jacob Tomsky, merely curated by him.  It seems a worthy project - I've already signed up to receive the weekly dispatches - and I hope you guys will check it out, too.

Yay Books! Magnet: "This one speaks for itself, right?  Slap it on your fridge and get back to your book."  Cute.  My fridge can use another magnet. $3.50.

Banned Books Mug: "Books + Beverages = BFFs." I love mugs, but I have a lot of them so a cup has to have something special to join my mug rotation.  What I really like about this one is that the titles of the Banned Books are all taken from the original first edition.  I recognize some of them from the covers, and I think the rest come from the title page.  Of course, that means that if the book was written in a language other than English, the native title is here - so I have no idea what some of these titles are, even though I'm sure I'd recognize the English name! $12.95.

So that's the Book Riot subscription box.  It's a really fun collection that I was really excited to get.  Dollarwise, it isn't the best deal - the value of the items in the box is just shy of the box's $50.00 price tag - but then again, my value count didn't include the ARC or the flash drive because those are basically publicity swag, not something you would purchase in a retail environment.  But it's a cool box, and really fun.  I'll be excited to see what comes in the next box!
Tags: book riot, books, quarterly.co, subscription boxes, surprises in the mail
Subscribe