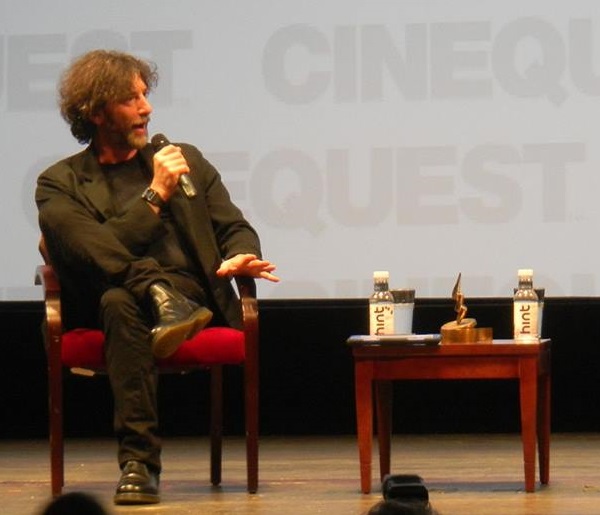 It's Neil Gaiman...with a beard?
Over the weekend, I had the pleasure of seeing Neil Gaiman speak at San Jose’s Cinequest Film Festival. Gaiman was in town to receive the Maverick Spirit Award, Cinequest’s highest honor and a tribute to those who successfully marry “the innovation of Silicon Valley with the creativity of the worlds of film and writing”. After receiving his lightning bolt-shaped trophy, Gaiman hung around to read some of his work and answer questions from moderator Vijay Vanniarajan and the eager audience.

He opened the afternoon with a reading of “Adventure Story”, which Gaiman had originally written for This American Life. The short story was not read on the radio show, but rejected in favor of a personal memoir about how Gaiman himself doesn’t really have adventures. Of course, he qualified this statement by noting that his wife Amanda Palmer has adventures aplenty, and sometimes he gets dragged along for the ride, and this is how ends up with a naked woman in an art museum hours before it opens to the public. As one does. Anyway, so he read “Adventure Story”, and it was lovely and entertaining and really set the mood for an afternoon of storytelling.

Neil Gaiman is a consummate storyteller. Although most of the afternoon was devoted to a Q&A, his answers to the questions were very well-crafted, peppered with little vignettes and perfect little examples from his work as a writer. I cannot dream of being so erudite or engaging in interviews. I grant you, Gaiman’s probably been asked variations of these questions for years, and he’s had time to think about how to answer them – but damn, he’s amazing.

There were four categories of questions: Who Are You?, Body of Work, Craft and Miscellaneous. Gaiman would select whatever topic tickled his fancy at the moment, and Vanniarajan would ask his question and let Gaiman take it away.

On receiving the Maverick Spirit Award specifically and lifetime achievement awards in general: “Once you've been given a lifetime achievement, you feel like you should go away and die…You definitely don't sit there and think, 'I am going to redefine anything for a generation.' You sit there and think, 'What is the next word? How can I make this character say something that people haven't read a thousand times before? How can I make this character say something true?’ That's the weird, sort of horrible fact of it -- It's you versus a blank screen, or a blank sheet of paper. And a lot of the times, the blank piece of paper wins. But you win enough, and after some time, if you win enough, you get a lightning bolt."”

On his favorite sound: “My wife’s voice.” He later qualified that there’s a specific, affectionate ‘wife’ voice that he adores, and it’s quite different from Palmer’s ‘business’ voice, which he finds slightly terrifying.

On his favorite curse word: "Oh, it's definitely 'fuck.' I love 'fuck' because it does so many things! It's one of the very few English words that you can actually interject into other words for emphasis, which is abso-fucking-lutely wonderful!"

On the origins of storytelling: “[The question] implies that there was a day before storytelling. That somebody woke up and went, 'Hang on --'…Stories fascinate me. They last an incredibly long time. Once you've been around for a bit, you start noticing that things don't last very long. Books that I was very proud of owning as a kid are now sort of falling apart because of age. You watch things yellow, you watch things fade. You watch time eat things. Towns and cities come and go, and yet we have stories that have outlasted the civilizations that created them! As a viral entity, stories are fascinating. And they also have incredible use."

On Coraline and scary stuff in children’s books: "The biggest lesson that I wanted to tell my kids was something that it had taken me most of my life to figure out. When I was a kid, I thought I was a coward, and I thought I was a coward because things scared me. But being scared has nothing to do with cowardice. Being brave doesn't mean that you're not scared. Anyone can be not scared. Being brave means that you are scared, and you do the right thing anyway. I wanted to tell my kids that, and in order to do that, I had to write a book in which the scary stuff is scary!...Girls probably somewhere between 20 and 25 [would approach him], and they would be clutching a copy of 'Coraline' that was so beaten up and so battered, and each of them would, if she could get the words out, start telling me about how the book had come into her life when she was about 11 or 12 and it had gotten her through the dark times…That's why you put the dark stuff in. It inoculates against the real dark stuff."

On plans for a Sandman movie: "There was a saying when I was a kid in Sussex: 'I've lived too near the woods too long to be frightened by an owl.' Right now there is exciting 'Sandman' stuff happening, but I can't help thinking that I've been here before...Joseph Gordon-Levitt, of all people, is an enormous 'Sandman' fan. He and David Goyer talked about it, they've come up, I believe, with a treatment of what they want the story of the first movie to be. They are talking to an incredible writer [Jack Thorne], who I coincidentally already knew, because he did the movie script for 'The Ocean at the End of the Lane,' so I've met him and loved his treatment of my work. And Wednesday afternoon I will be spending with Joseph Gordon-Levitt and talking 'Sandman!' That's pretty much everything I know. Now you know as much as I know."

On future sequels: Gaiman announced that he is working on a sequel to American Gods, and will continue to progress on that project unless he gets sidetracked. He had recently listened to a BBC Radio presentation of Neverwhere, and after finishing it thought, “That was pretty good. Why isn’t there more of this?...oh yeah.” So he may find himself working on Neverwhere II should the inspiration strike.

Best question of the evening: "Is there a portal to Narnia hidden in the deep recesses of your hair?" Gaiman noted that hair had been a particular fascination on his current travels; at a previous stop the first question from the audience was, “What’s with the beard?”

As a final treat, Gaiman read one of his poems to the audience – “The Day the Saucers Came”.

This talk at Cinequest made for a fantastic and inspiring afternoon. Gaiman is just as engaging in person – perhaps even more so – than he is on the page. Tickets to his events always sell out super quickly, so I felt really lucky that I was able to see him during his stop in San Jose.
Tags: authors, books, cinequest, coraline, movies, neil gaiman, san jose
Subscribe