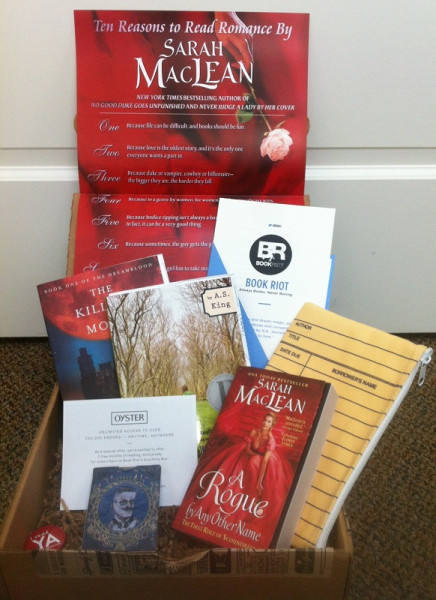 "Summer is the season for adventures, so we thought it was the perfect time to present you with not one, not two, but three (!) great books to expand your readerly horizons."

According to the curators of the Book Riot Book box, the three genres that readers are most hesitant to try for the first time are romance, sci-fi/fantasy, and young adult. In an attempt to encourage cross-pollination between the fandoms, June’s box contains a favorite from each category to help readers try something new. 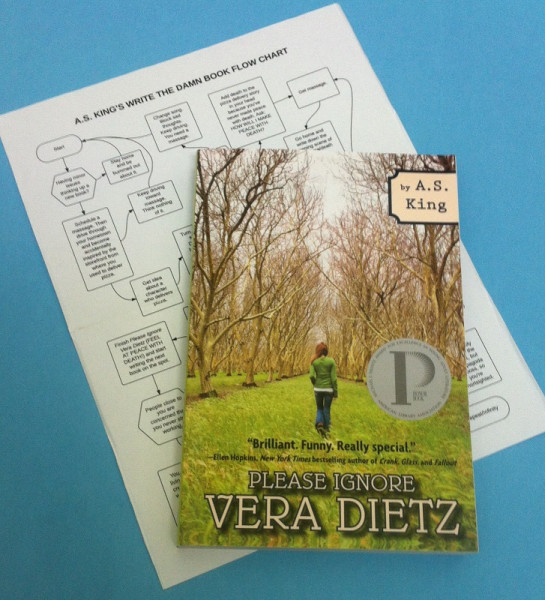 PLEASE IGNORE VERA DIETZ BY A. S. KING
Vera’s spent her whole life secretly in love with her best friend, Charlie Kahn. And over the years she’s kept a lot of his secrets. Even after he betrayed her. Even after he ruined everything.
So when Charlie dies in dark circumstances, Vera knows a lot more than anyone—the kids at school, his family, even the police. But will she emerge to clear his name? Does she even want to?
Edgy and gripping, Please Ignore Vera Dietz is an unforgettable novel: smart, funny, dramatic, and always surprising.

This young adult offering comes with an original flowchart from author A. S. King about her writing process. Sound weird? Don’t worry, it ties into the novel, where flowcharts feature prominently. $9.99 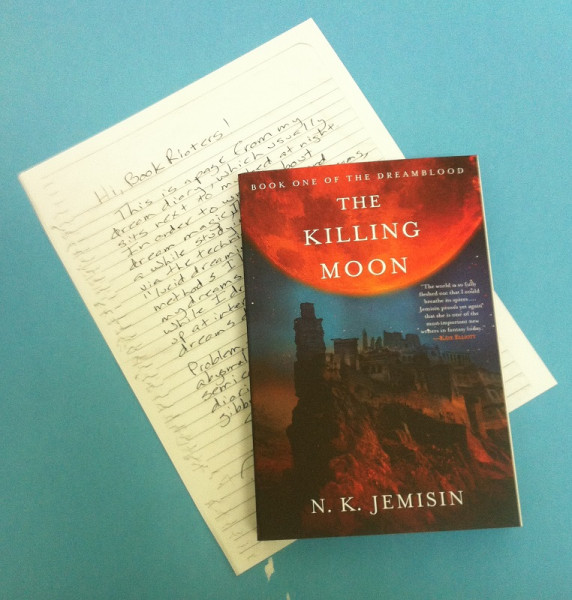 THE KILLING MOON BY N. K. JEMISIN
In the ancient city-state of Gujaareh, peace is the only law. Upon its rooftops and amongst the shadows of its cobbled streets wait the Gatherers - the keepers of this peace. Priests of the dream-goddess, their duty is to harvest the magic of the sleeping mind and use it to heal, soothe . . . and kill those judged corrupt.
But when a conspiracy blooms within Gujaareh's great temple, Ehiru - the most famous of the city's Gatherers - must question everything he knows. Someone, or something, is murdering dreamers in the goddess' name, stalking its prey both in Gujaareh's alleys and the realm of dreams. Ehiru must now protect the woman he was sent to kill - or watch the city be devoured by war and forbidden magic.
Representing the fantasy genre is The Killing Moon, a tale set in a land reminiscent of Ancient Egypt.  The curator who selected this book describes it as "ninja-priests and dream magic...if you like action, mythology and armchair travels, you owe it to yourself to pick this up."  Of the three books included in the box, this one is far and away the one I most look forward to reading.  Tucked into the book is a copy of a handwritten not from the author.  $14.99

A ROGUE BY ANY OTHER NAME BY SARAH MACLEAN
The first book in her remarkably fresh and original Fallen Angels series—featuring four dark Regency Era heroes who will steal the hearts of their heroines and the readers alike—A Rogue will captivate fans of Julia Quinn and Suzanne Enoch while bringing new romance readers eagerly into the fold. The scintillating story of a disgraced Marquess reduced to running a London gambling hall who hopes to restore his good fortune by marrying a very proper lady who’s secretly drawn to sin, A Rogue by Any Other Name is sexy and wicked fun.

Romance.  I like a bit of love in my novels - in fact, many of the historical fiction novels I read could be qualified as "historical romances" - but bodice rippers?  I'm really not interested.  However, in the interest of carrying out the box's goal of cross-genre reading, I will read this book.  Look forward to the review whenever I get around to it; I'm sure it'll be priceless.

The book came with a poster that lists ten reasons to read romance novels.  These include gems like, "In a genre by women, for women, the heroine always wins" and "Life is difficult, and books should be fun."  Like I said, priceless.  $7.99

But one of the reasons I so enjoy these Book Riot boxes is that they are not books!  There are also book-related items, and these are often more interesting than the actual novels, as I plenty of books as it is but the other things are often new territory. 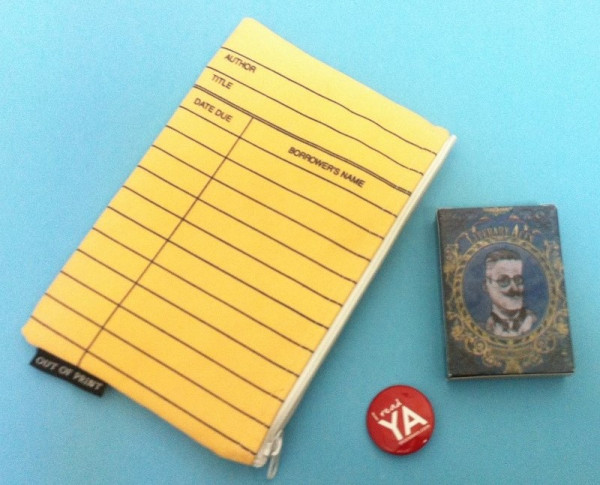 LITERARY ACES PLAYING CARDS: This deck of cards has a different author on each of the face cards, including literary luminaries like Virginia Woolf, George Eliot, and Franz Kafka.  $10.00

OUT OF PRINT LIBRARY CARD POUCH: I love this.  I think it's super cute!  It's a large enough pouch that a small book can fit inside, but I'll probably end up using it for pens and bookmarks and other reading accessories.  For every product purchased from Out of Print, a book is donated to their partner organization Books for Africa.  As I glance through their clothing catalog, I see a t-shirt for Neil Gaiman's American Gods and an adorable To Kill a Mockingbird necklace.  If I'm not careful, I'll be tempted into a shopping spree.  $12.00

I READ YA BUTTON: It's a cute little button celebrating young adult literature, created by This is Teen.  Once upon a time I used to plaster my backpack with buttons, but this would get a little lost on my red purse so I'll find a fellow reader to enjoy it.  $0.25?

2 FREE MONTHS OF OYSTER:  Oyster is a subscription service for ebooks.  For $9.95 a month, readers gain access to over 500,000 titles in Oyster's digital library.  I'm still bitterly fighting the move to ebooks, but my husband loves them so I'm going to give this card to him.  $19.90

Book Riot also had several "lottery items" this month. These included 5 Kobo Arc tablets, tote bags, and several additional book titles.  I  wasn't lucky enough to win one, but according to the box notes about a quarter of the box's subscribers did get something extra in their box.

Quarterly Co. is a subscription box service company that partners with celebrities to "curate" boxes, usually themed around food or fashion or cool gadgets, which are mailed out four times a year. For their book-themed box, Quarterly partnered with Book Riot. At $50.00 per quarter, the box isn't the cheapest subscription box service out there, but the curators promise that the retail value of the items you receive will be more than the cost.
Tags: book riot, books, quarterly.co, subscription boxes, surprises in the mail
Subscribe