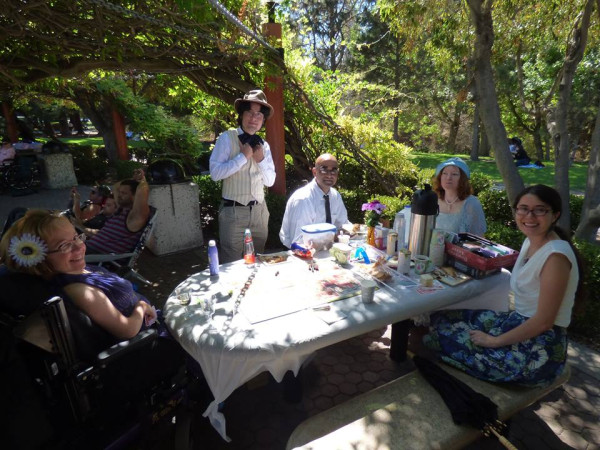 Yesterday was Donna’s birthday. (Donna is my brother’s girlfriend, in case I haven’t mentioned her in a while.) She had a Downton Abbey-themed tea party in a park in Santa Clara. It was really neat! Most of her guests dressed up in early 20th century outfits and drank tea and nibbled little sandwiches while listening to period-appropriate music.

Well, that last part didn’t really happen. It turned out that at the same time we were all playing at Edwardian nobility, a rock concert was blasting in the background. I guess on Sunday afternoons, Santa Clara offers free music in the park for its residents. Oops.

But never mind, the band was fun to listen to, even if they didn’t quite match the mood.

I arrived late to the party, since I was working at the bookstore in the morning.  (This is also why my clothing was definitely not from the correct time period.)  We played a Dowton Abbey-themed board game for a while and then tried our hand at lawn bocce ball, which was a truly grand experience because most of us had never played the game before. Our bocce balls rolled all over the place. But it was definitely a lot of fun! 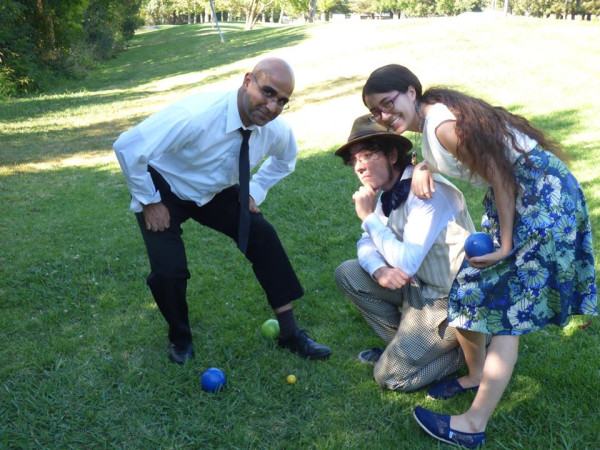 I just realized that in a fit of bad planning, no one took a picture of the birthday girl.  I'm so sorry, Donna!  We're bad friends.
Tags: birthday, friends, kenny, party, tv
Subscribe