I had class in the morning so I couldn't totally geek out of the holiday, although I debated wearing a costume to school because how many more times am I going to get away with that? In the end, though, I settled for a skull sweater, and this was the wise decision because absolutely no one else in class had Halloween spirit. We did an interesting exercise in exhibit design by deconstructing the display set up by a classmate in the California History Center. Poor girl was red as a beet as our teacher pointed out all of the problems with the way the room was laid out, but it was valuable feedback and a real learning experience. (It did make me glad that the teacher never saw the exhibit I designed for the Anasazi museum – I hate to think what she'd say about that!)

When class ended I went home to get dressed for the evening. I didn't do anything too spectacular – just threw on a black Hot Topic dress, painted some purple eyeshadow on my lids, and called myself a witch. Easiest/laziest costume by far.

I went over to my parent's house to say hello. My mom was in Washington DC and I wanted to check on my dad, make sure he'd gotten candy to hand out to the kids. When I arrived he was rushing around the house, trying to find a quick Halloween decoration to put on the porch so people would know we had candy. Mom used to have little plastic pumpkins, but we couldn't find them, so I dragged one of my mannequins down the stairs and made a quick ghost bride out of a bar stool, a rejected wedding dress, and a wig my brother uses for Rocky Horror Picture Show events. It turned out pretty well!

Daddy and his ghost bride

Now that the house was properly Halloween'd, I hit the road again. Kitty was taking Kairi trick-or-treating, and Kero and I were tagging along. Kairi dressed up as a bumblebee, as did both her mother and her dog. Can't say that a witch matched the group particularly well, but Kero was dressed as a Tardis so at lesat I was not the only odd one in the party. We did the rounds of Kitty's neighborhood; after the first couple of houses, Kairi caught on pretty quickly, although she still needed encouragement in front of dark or aggressively decorated houses. She only gave up when her candy-filled pumpkin became too heavy for her to hold. 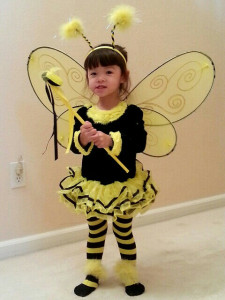 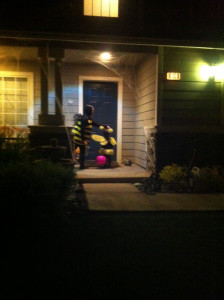 Kairi in costume and in action with her queen bee mom

It was a quiet Halloween. Seanie and I were invited to a really cool costumed roller derby up in San Francisco, and if I had not already committed to spending the evening at Kitty's we might have gone to that. So next year, I think that will definitely be on the radar. But we'll see. One of the cool things about Halloween is that it's such an unpredictable time of year, and you never know what will end up happening.
Tags: halloween, kairi, kero, kitty
Subscribe