The Hobbit: The Battle of the Five Armies**

Enraged by the dwarves’ attack, Smaug leaves his stronghold in the Lonely Mountain to attack the 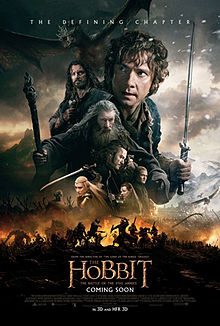 people of Laketown. As he rains fire and destruction upon the city, the dwarves take up residence in their reclaimed kingdom. The celebratory mood is somewhat dampened by the madness that is destroying Thorin’s mind. As armies of dwarves, humans, elves, and orcs converge at the Lonely Mountain Bilbo realizes that the only way they’ll survive the upcoming war is if he betrays Thorin, an action that will destroy their friendship forever.
At long, long last, The Hobbit is over, and what a film. I don’t even know where to begin talking about it.

I guess the beginning is as good a place as any. Smaug flies to Lake-town to destroy it, and the sequence of an enormous badass dragon burning everything to ashes is the best part of the movie. No contest. No other scene comes close. But Smaug doesn’t last more than ten or fifteen minutes before Bard the Bowman (Luke Evans) shoots him down with a particularly well-aimed arrow, and then the best villain in the franchise is dead. Yes, Smaug’s death is the catalyst that allows the rest of the movie to move forward, but what a waste to end him so early on.

So yes, Smaug’s dead, and everyone wants to claim a share of his treasure. Some are justified: the people of Lake-town want enough gold to rebuild their town, which is only fair given that they helped support the dwarves in their takeover of the dragon’s lair. The elves just want certain sentimental items returned; yeah, they didn’t do much to help defeat Smaug but for the sake of diplomacy, maybe Thorin should let them have the trinkets. But no – Thorin will have all the treasure, no sharing, end of discussion. The dwarves seal the entrance and presumably spend their days swimming in gold a la Scrooge McDuck while the people of Lake-town starve and the elves comb their hair and fume.

But wait! Did you forget that Gandalf is the prisoner of the Necromancer, in desperate need of rescue? Yes, I did too. After all, that nonsense ain’t in the book. However, Peter Jackson needs to tie The Hobbit to Lord of the Rings so Galadriel, Elrond, and Saruman come rushing in to save the Grey Wizard. There’s something utterly delightful about ninety-something-years-old Christopher Lee kicking ass, even though you know that’s got to be computers and stunt doubles getting smashed about. The fact that Galadriel delivers the final blow to the Necromancer gives this franchise a much needed shot of girl power, something Tauriel’s weak little love triangle utterly fails to accomplish. So while this entire side-plot with the Necromancer was utterly unnecessary, that one battle scene is infinitely cooler than the much larger war going down by the Lonely Mountain.

But before I begin talking about that battle, let’s just take a moment to once again appreciate some of the fine actors in this trilogy. As madness slowly takes over Thorin’s mind, Richard Armitage does an amazing job. All of the cruelty and greed that has been underlying Thorin’s character bubble up to the top, but there are these small, glimmering moments when his better nature emerges. Probably my favorite scene in the entire movie is a little one he shares with Bilbo. In one of his rages, Thorin demands that Bilbo turn out his pockets, convinced that he’s stolen the Arkenstone. (Which, in fact, Bilbo has.) Bilbo obliges, and the small object he was playing with is revealed to be an acorn. As Bilbo explains his intention to plant the acorn when he gets home so he’ll remember their adventures, Thorin’s face lights up and for a moment all madness is gone. If given a few more moments, Bilbo may have gotten through to him and averted the oncoming battle…but of course that doesn’t happen.

Anyway, Richard Armitage’s ability to shift in and out of madness in scenes like that one is definitely worth noting. It doesn’t work so well in some of the other scenes – there’s one where he hallucinates that he gets swallowed up by molten gold a la Smaug and the laughable CG background combined with the greenscreen acting isn’t believable in any way. But he tries, and when it works, it works really well.

Then there’s Martin Freeman as Bilbo. Man. Casting nailed that one. He has been consistently great in the role, and this final movie is no exception. Again, I’m only left asking, “Why wasn’t there more Bilbo in this movie?” Every time the camera moves away from him, the movie suffers.

Speaking of suffering, let’s take a look at that big battle of the five armies.

Individual battle scenes generally look really good. The elves move in perfect military formation while dwarves move like chaotic Viking brawlers, and while it’s still very obviously computer generated the armies look a lot better than those in Return of the King. But the endless of repetition of one violent scene after another quickly numbs the viewer from the horror, and it gets boring.

Aware that he’s losing the audience, Peter Jackson brings Legolas in to do more impossible Legolas battles. In previous movies he’s skateboarded off castle walls, mounted a horse by jumping in front of it and lifting himself onto the saddle with one hand, and other things so impossible that they cross into silly. This time it just jumps straight to video game as Legolas plays Tetris with the pieces of a falling bridge and flies through the air by controlling a killer bat and I DON’T KNOW THIS IS TOO STUPID TO UNDERSTAND. I mean, it was funny as can be, but I don’t get the impression that it was supposed to be funny.

I mean, there were a lot of awkward moments when my husband and I were the only ones laughing in the theater.

But yeah, the love triangle with Legolas, Tauriel, and Kili gets dragged on and on. In a fit of unnecessary exposition, Legolas reveals that he has issues because his parents never said they loved him, or something stupid like that, and after the battle’s over he decides to run away rather than go back to living under his father’s roof, so as parting words his dad tells him his mother loves him, or something, I wasn’t really paying attention because WHO CARES. In the meantime Tauriel’s crying that love hurts SO MUCH so Legolas’ dad is like, “That’s how you know it was real” and I think there was supposed to pass for character development but no, not really. And Kili…well, like the other dwarves who get enough screen time so that we learn their names, he ends up dead in the end. Spoilers. Sorry.

It’s exhausting, thinking about this movie and its trilogy. I wanted to like it. In fact, a lot of the time I did like it. But it’s just too much. Too many plot threads were stretched thin to try and bloat out a little children’s book into a three very long movies, and it’s unfortunate. I’m sure that sometime in the near future, a dedicated fan will hack out the unnecessary bits and string together a single Hobbit movie that will be really, really good, what this movie SHOULD have been.

I look forward to that day.

**Am I the only one who was confused by the subtitle of this movie? For the life of me, I couldn’t figure out who the fifth army was. Men? One. Dwarves? Two. Elves? Three. Orcs? Four. Eagles? Wizards? He-Who-Must-Not-Be-Named?
So according to the Internets, these are the five armies in this movie:
1. Men from the Lake Town under Bard.
2. Elves from Mirkwood under Thranduil.
3. Dwarves from the Iron Hills under Dain.
4. Orcs from Dol Guldur, under Azog.
5. Orcs/goblins from Gundabad, under Bolg.

In the original book, the fifth army was actually the Wargs, but the wild wolves were made subordinate to the orcs in the movies so they no longer count as their own independent group.
Tags: fantasy, lord of the rings, movies
Subscribe