Powell's Indiespensable Book Club
Volume 52: Our Endless Numbered Days
Since 2008, Powell's Books of Portland, OR has run a book club/subscription service that sends a new, autographed hardcover book in a custom slipcase to its subscribers. Each mailing is accompanied with notes on the selected book and a surprise selection of extra items. 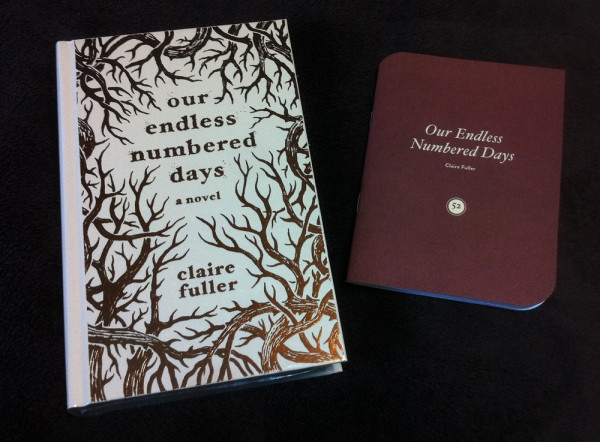 OUR ENDLESS NUMBERED DAYS by Claire Fuller
Part fairy-tale, part magic, yet always savagely realistic Claire Fuller's haunting and powerful debut Our Endless Numbered Days will appeal to fans of Eowyn Ivey's The Snow Child and Christian Baker Kline's Orphan Train .
Peggy Hillcoat is eight years old when her survivalist father, James, takes her from their home in London to a remote hut in the woods and tells her that the rest of the world has been destroyed. Deep in the wilderness, Peggy and James make a life for themselves. They repair the hut, bathe in water from the river, hunt and gather food in the summers and almost starve in the harsh winters. They mark their days only by the sun and the seasons. When Peggy finds a pair of boots in the forest and begins a search for their owner, she unwittingly begins to unravel the series of events that brought her to the woods and, in doing so, discovers the strength she needs to go back to the home and mother she thought she’d lost. After Peggy's return to civilization, her mother learns the truth of her escape, of what happened to James on the last night out in the woods, and of the secret that Peggy has carried with her ever since.

The hardcover, which I believe is exclusive to Indiespensable, is gorgeous.  It's white with a metallic embossed design that looks really cool, and there's a page with the author's autograph inside.  Unlike my previous Indiespensable books, this one didn't come with a slipcase, which is a little disappointing because the combination of white + easily scuffed embossing means that any wear to the cover will show quite clearly.  I wish they'd included a dustjacket if they were going to forego the slipcase!  I also always tuck the accompanying booklet into the slipcase so that it won't get separated from the main novel - I've placed this one right inside the cover but it just isn't the same. But the book sounds awesome and I can't wait to read it - this novel is right up my alley! 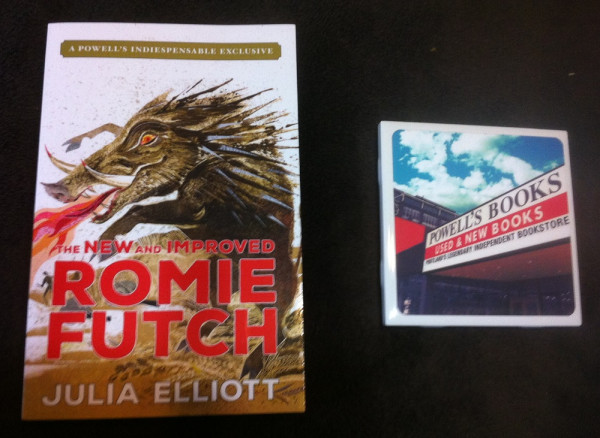 THE NEW AND IMPROVED ROMIE FUTCH by Julia Elliott
From the author of The Wilds, which Publishers Weekly called “a brilliant combination of emotion and grime, wit and horror,” comes a debut novel that is part dystopian satire, part Southern Gothic tall tale: a disturbing yet hilarious romp through a surreal New South where newfangled medical technologies change the structure of the human brain and genetically modified feral animals ravage the blighted landscape.
Down on his luck and still pining for his ex-wife, South Carolina taxidermist Romie Futch spends his evenings drunkenly surfing the Internet before passing out on his couch. In a last-ditch attempt to pay his mortgage, he replies to an ad and becomes a research subject in an experiment conducted by the Center for Cybernetic Neuroscience in Atlanta, Georgia. After “scientists” download hifalutin humanities disciplines into their brains, Romie and his fellow guinea pigs start debating the works of Foucault and hashing out the intricacies of postmodern subjectivity. The enhanced taxidermist, who once aspired to be an artist, returns to his hometown ready to revolutionize his work and revive his failed marriage. As Romie tracks down specimens for his elaborate animatronic taxidermy dioramas, he develops an Ahab-caliber obsession with bagging “Hogzilla,” a thousand-pound feral hog that has been terrorizing Hampton County. Cruising hog-hunting websites, he learns that this lab-spawned monster possesses peculiar traits. Pulled into an absurd and murky underworld of biotech operatives, FDA agents, and environmental activists, Romie becomes entangled in the enigma of Hogzilla’s origins.
Exploring the interplay between nature and culture, biology and technology, reality and art, The New and Improved Romie Futch probes the mysteries of memory and consciousness, offering a darkly comic yet heartfelt take on the contemporary human predicament.
Again, a book that sounds like just the sort of thing I would have picked out on my own.  I'm excited to read it!  My only complaint is that this book won't be released until October 2015 - so this "Indiespensable Exclusive" is a glorified ARC, and it looks and feels like one.  Considering the quality of past boxes and the amount I pay for the subscription, I just expected better than a paperback ARC and a hardcover missing its slipcase and/or dustjacket.

But focus on the titles, and the fact that I can't wait to start both books!  It's all good.


POWELL'S BOOKS COASTER
Created by a local Portland company, this large tile coaster features a photo of the Powell's Books marquee.  I'm not wild about it, to be honest.  The picture's not that attractive (sorry, Powell's) and I like having coaster sets with three or four matching designs.  Oh well.  Maybe I'll take it to work, since I never need more than a single coaster there.