Powell's Indiespensable Book Club
Volume 53: The Diver's Clothes Lie Empty
Since 2008, Powell's Books of Portland, OR has run a book club/subscription service that sends a new, autographed hardcover book in a custom slipcase to its subscribers. Each mailing is accompanied with notes on the selected book and a surprise selection of extra items. 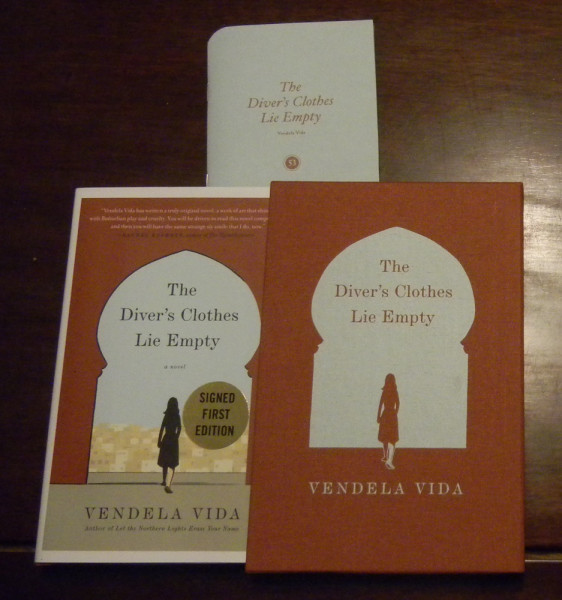 THE DIVER'S CLOTHES LIE EMPTY BY VENDELA VIDA
In Vendela Vida's mesmerizing novel of ideas, a woman travels to Casablanca, Morocco, on mysterious business. While checking into her hotel, the woman is robbed of her wallet and passport — all of her money and identification. Though the police investigate, the woman senses an undercurrent of complicity between the hotel staff and the authorities — she knows she'll never recover her possessions. Stripped of her identity, she feels burdened by the crime yet strangely liberated by her sudden freedom to be anyone she chooses.
A chance encounter with a movie producer leads to a job posing as a stand-in for a well-known film star. The star reels her in deeper, though, and soon she's inhabiting the actress's skin off-set too — going deeper into the Casablancan night and further from herself. And so continues a strange and breathtaking journey full of unexpected turns, an adventure in which the woman finds herself moving irrevocably, thrillingly, away from the person she once was.
Told with vibrant, lush detail and a wicked sense of humor, The Diver's Clothes Lie Empty is part literary mystery, part psychological thriller — an unforgettable novel that explores free will, power, and a woman's right to choose not her past, not her present, but certainly her future. This is Vendela Vida's most assured and ambitious novel yet.
I was glad to see that Powell's has returned to including a slipcase for the featured title. This isn't a title that I would normally pick out for myself, but I've been hearing a lot of positive things about the book from other booksellers so I am intrigued. As always, each Powell's title comes autographed and includes a little pamphlet containing an interview with the author, Vendela Vida. 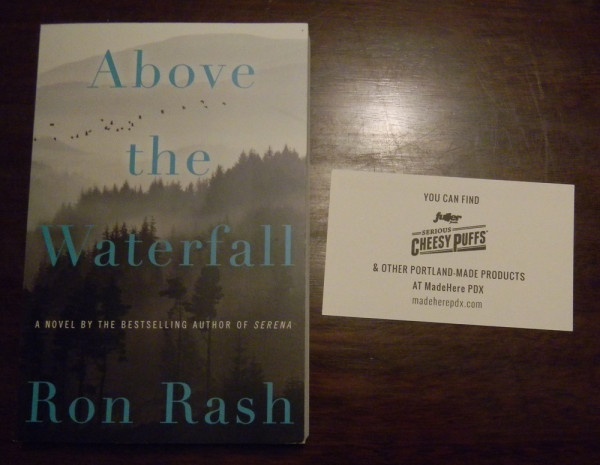 ABOVE THE WATERFALL by Ron Rash
In this poetic and haunting tale set in contemporary Appalachia, New York Times bestselling author Ron Rash illuminates lives shaped by violence and a powerful connection to the land.
Les, a long-time sheriff just three-weeks from retirement, contends with the ravages of crystal meth and his own duplicity in his small Appalachian town.
Becky, a park ranger with a harrowing past, finds solace amid the lyrical beauty of this patch of North Carolina.
Enduring the mistakes and tragedies that have indelibly marked them, they are drawn together by a reverence for the natural world. When an irascible elderly local is accused of poisoning a trout stream, Les and Becky are plunged into deep and dangerous waters, forced to navigate currents of disillusionment and betrayal that will force them to question themselves and test their tentative bond—and threaten to carry them over the edge.
Echoing the heartbreaking beauty of William Faulkner and the spiritual isolation of Carson McCullers, Above the Waterfall demonstrates once again the prodigious talent of “a gorgeous, brutal writer” (Richard Price) hailed as “one of the great American authors at work today” (Janet Maslin, New York Times).
Powell's included an ARC (Advance Reader Copy) of Above the Waterfall in this month's shipment. (The official release date for the hardcover is in September.) I'm not familiar with Ron Rash's work. I've seen his books on the shelves at Village House of Books – we brought several in when Serena became a movie earlier this year – but I've never really picked one up. I thought that he wrote Westerns, but now I'm not sure where I got that impression.

FULLER FOODS Serious Cheesy Puffs in Sriracha and Cheddar (not pictured)
Normally I include a picture of everything that arrives in a subscription box, but my husband ate these before I got my camera out. They're similar to Cheetos, but fatter, and with fancier flavors. I'm probably one of the few people who has yet to jump on the Sriracha bandwagon, but Seanie likes the hot sauce so he dove right into the bag.

Some good book titles that I can't wait to read, and a snack that my husband couldn't wait to eat. All in all, a good box.