I started this year with the true and noble intention of getting back into the habit of regular blogging. It started out well. I'd come home from work, eat dinner, and go to the back office to crank out a book review and a blog post or two before emerging to hang out with Seanie. Well, sometimes I'd get so into my writing that I'd ignore Seanie for most of the evening, but the work-life balance would have followed, I'm sure.

Then I remembered that we have Disney Infinity. 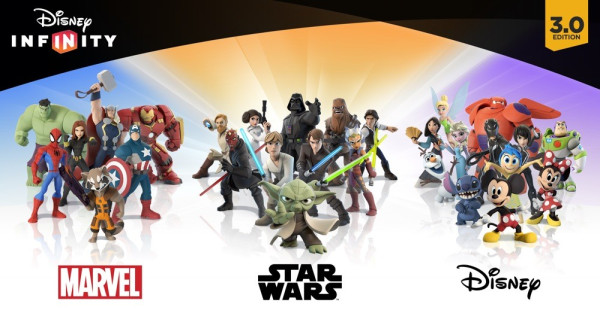 Disney Infinity is this silly but (for me) highly addictive video game. You buy figures of different Disney and Pixar characters, which can either be plugged into an action/RPG story mode or let loose in a free play "Toy Box".  When they introduced a 2.0 version, comic book characters from Marvel were added.  3.0 was huge because now STAR WARS was part of Disney Infinity. The story mode is a fairly traditional style of game; if you play the Pirates of the Caribbean story you can only use the Pirates of the Caribbean characters. But the Toy Box is potentially very fun because you can mix characters from different stories together.

In early iterations of the game, they didn't do much with this. The Toy Box was just an empty area where characters could drive around in cars and build a custom environment...but that was about it. It rarely held my interest for more than a few minutes.

But the game has improved immensely. There's now a racing game that can use any of the characters for Mario Kart-style gaming. The mini-games in the Toy Box have been hugely expanded so that you can decorate a house like in Animal Crossing, fight monsters to level up your characters and unlock new powers, or care for virtual pet-like sidekicks. I was goofing around in this mode when I learned that they had a farming mode where you grow crops for your sidekicks. This mini-game is like playing Harvest Moon, which was one of my favorite games back on the Nintendo 64.

It's repetitive yet very, very addictive.

One disadvantage of the game is that you get characters by buying little figurines, which have a chip on the bottom that the game reads.  That means if you want to have lots of different characters to play, you must spend a LOT of money buying all the different figures.  Luckily, Seanie was sent most of the 3.0 figures for review, so we didn't have to pay for those.  But this means we have DOZENS of little plastic figures cluttering up every available space in the house.  It drives Seanie nuts, but at the same time he likes that I'm playing a video game so he tries not to complain about the mess too much.

We really should figure out some kind of permanent storage solution though.