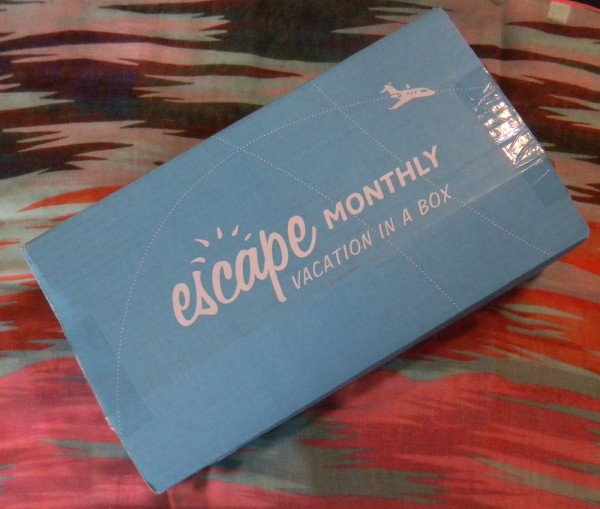 ESCAPE MONTHLY: NOVEMBER 2015
ARIZONA
Escape Monthly is a travel-themed subscription box. I was an early adopter, signing up for the first or second box, but I canceled the subscription in 2014 after the quality of the boxes dropped appreciably. I haven't paid much attention since I left, but at one point I heard that the company changed hands. Around Black Friday, Escape Monthly offered a special where you could get the subscription for a ten dollar discount each month PLUS a free bonus box. I couldn't resist once I realized that the next destination was Arizona, and the bonus box would be Greece. I signed up once more.

The Arizona box arrived today. The photograph of red rock against a blue sky set in a desert immediately made me nostalgic for the days when I lived in Utah. The enclosed itinerary brochure described the highlights of the forty-eighth state as follows:

ARIZONA AT A GLANCE
Marcos de Niza, a Spanish Franciscan friar, was the first European to explore Arizona. He entered the area in 1539 in search of the mythical Seven Cities of Gold. Although he was followed a year later by another gold seeker, Francisco Vasquez de Coronado, most of the early settlement was for missionary purposes. In 1775 the Spanish established Fort Tucson. In 1848, after the Mexican War, most of the Arizona territory became part of the U.S., and the southern portion of the territory was added by the Gadsden Purchase in 1853.

Arizona history is rich in legends of America's Old West. It was here that the great Indian chiefs Geronimo and Cochise led their people against the frontiersmen. Tombstone, Arizona, was the site of the West's most famous shoot-out – the gunfight at the O.K. Corral. Today, Arizona has one of the larges U. S. Indian populations; more than 14 tribes are represented on twenty reservations.

Call me a nerd but I loved this little history lesson. It really got me into a mood to hear more about Arizona, and made me curious about what items they would choose to include. 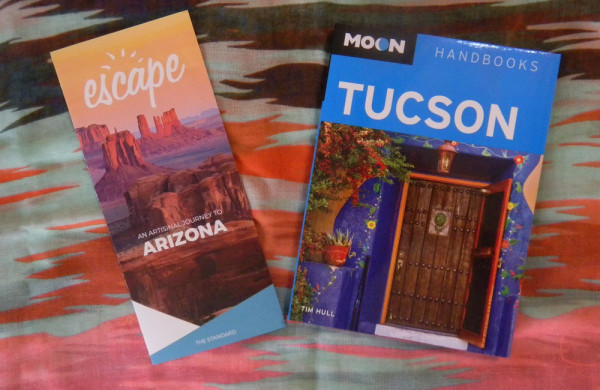 MOON HANDBOOK Tucson Guide: Every Escape Monthly box includes a travel guide, which is one of my favorite things about the box. Skimming a book like this one is usually the trigger than gets me to plan an adventure, and Tucson is somewhere I'd really love to go on a road trip. $16.99

Route 66 Travel Mug: I love this! The cup's a little kitschy, but also practical. This is definitely something I would buy if I was driving around Arizona. It's mostly made of plastic, so it won't insulate heated beverages very well, but I will still use it happily. One side has a list of Route 66 trivia like length, date commissioned, and other fun facts. $10-$15.00?

PHIZZ Tablets: I've never seen these before, but as near as I can tell it's a tablet that dissolves in water to create a sports drink similar to Gatorade. It would be GREAT for back country hiking, where you need the electrolytes but definitely don't want the weight of hauling many bottles of liquid. Looks like it comes in an orange citrus flavor. It's not an Arizona product, or even American, but it's definitely the sort of thing you'd want to use if hiking in the Grand Canyon or another famous location. £ 4.99

ARIZONA SUN Lip*Kist Lip Balm: This lemon-scented lip balm comes with SPF 15 sun protection. My husband will be thrilled that this is a “normal” flavor; my current lip balm is lychee and he hates the taste of it. $3.50

ARIZONA SUN Bath & Shower Gelee: I'm not sure how to describe the scent of this shower gel. It reminds me of that sort of artificial watery ozone scent you see frequently used in men's haircare, but with a dash of coconut? The bottle says that native Arizona cacti are used in the formula to keep skin soft. Perhaps that's what I'm smelling; I can't say that I know what a cactus smells like. $8.60

Blue Mesh Sponge: I assume this was included as a vehicle for the shower gel. Every drug store and grocery store in America carries these; they are hardly exclusive to Arizona. $2.00?

Turquoise Necklace and Bracelet Set: When the pamphlet mentions that this is turquoise, it must be referring to the color, not the stone. I'm 99% sure these beads are plastic or clay or some other synthetic material. But no matter. The jewelry just screams summer to me, and when I pull my shorts out next spring I'll be wearing these beads, too. $10-$20.00? 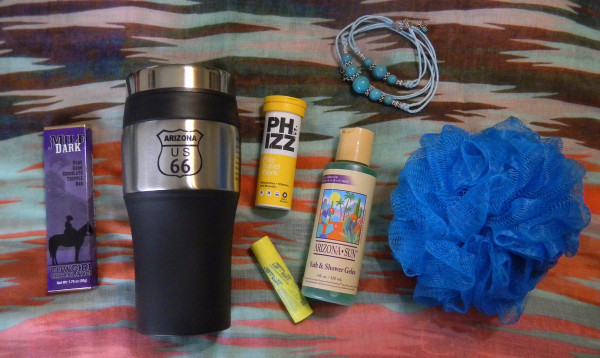 This was a well-curated box. To me, it captures something of the spirit of traveling through the Southwest, and inspired great nostalgia for me. The items were a good mix of practical and touristy, and there was a nice balance between edible products, skincare, and other kinds of tchotchkes. I'm glad I took a chance and resubscribed.
Tags: arizona, chocolate, escape monthly, southwest, subscription boxes, surprises in the mail, travel
Subscribe